Action: Choose a hero. Until the end of the phase, the chosen hero does not exhaust to attack or defend.

Valour Action: Choose a player. Until the end of the phase, each of that player's heroes do not exhaust to attack or defend.

These three were unscathed, for such was their fortune and the skill and might of their arms...
The Return of the King
Mark Behm 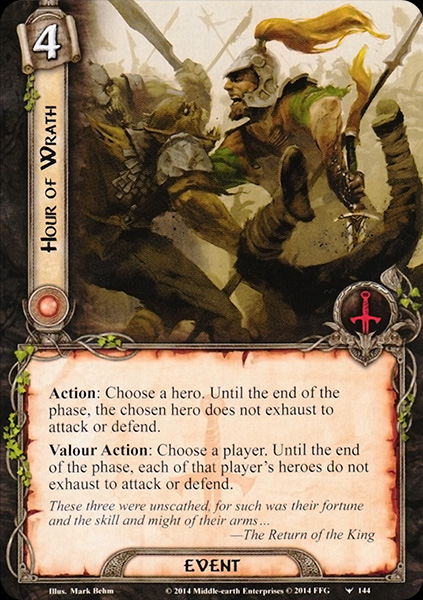 Expensive so really requires setup to make sure you maximize it.

Tactics Eowyn, Hammer Stroke, and this lets you defeat just about every enemy on the board though so the possibilities are out there.

The Valour Action can be incredibly good too in a big fellowship, one strong sentinel defender like Beregond and 1 or 2 ranged attackers can both defend and then help clean up the board.

With time, I've come to love this card more and more. For those moments you're overwhelmed with enemies, it can make all the difference in how the game plays out, and is certainly more fun than lots of Unexpected Courages, even if those are more dependable. I also love the full quote that's cut off the card, which takes place during the siege of Minas Tirith in describing Aragorn, Eomer, and Imrahil: "These three were unscathed, for such was their fortune and the skill and might of their arms, and few indeed had dared to abide them or look on their faces in the hour of their wrath." (I imagine this card's image to be Eomer.)

As for the card itself, for such a great ability, it only makes sense that it's so costly, so it likely won't see play until mid to late game, so you'll likely only include 1-2 copies. But for those quests where the combat action ramps up, it also grants your hero(es) a moment to ramp up. And if you've ever played Pillars of the Kings for free, right before Hour of Wrath to maximize its effect, it feels like an epic, no-holds-barred moment where desperate action is called for.

One of my favorite plays with this card wasn't even in Valour, but on sentinel Grimbeorn the Old while wielding Glamdring and he had lots of resources, with both players facing several enemies. Single-handedly, he defended and paid a resource to counter-attack each one and destroy it, and with each enemy's destruction, I drew a card.

Did it feel a bit OP? You'd maybe think so, but when you take into account how much I had to do to make it viable (get Glamdring in his hands with extra encounter card draw, save up resources on him, and then afford a 4 cost event card) it felt more like a satisfying accomplishment I had to work for, making it quite gratifying. (Honestly, my only regret was I didn't have the resources to fully pay for a Knife-work card in hand, which would have allowed me to draw 2 cards with each enemy's death.)

So while it's a less dependable card than attachment readying effects, its "in the moment" effect feels thematic in that the hero(es) need to make the most of the phase it's played in by making a stand as the enemies have been gaining tempo while you've been losing ground. At those times, this card can very possibly turn the entire tide of battle, making all the difference between victory or defeat.

Not sure if Is this a review of Hour of Wrath or Legolas.

I feel like you could build a Legolas kills everything and quests for the win in the meantime deck. A couple blades of gondolin and support of the eagles, BAM!!, quest over (especially in a 4 player game)