Response: After an enemy is declared as an attacker against you, declare an exhausted character you control as the defender. Resolve that effect again for each copy of Anchor Watch currently in your discard pile (all chosen characters are defending against this attack). 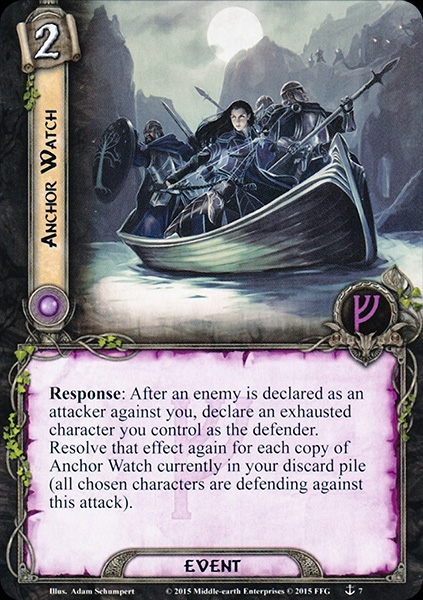 It's niche for a few main reasons:

Explanation for reason number 1: To be blunt, cheap cards are above the power curve in any game. Yes, they might have weaker stats or effects than other cards (Silvan Refugee vs. Pelargir Shipwright), but that's counteracted by the fact that you can get a lot of them into play for the same cost that it would take to get one expensive card into play. Now, in certain cases, there are factors that counteract the benefit of cheapness, such as the opportunity cost of taking up a restricted slot (Ring Mail vs. Ancestral Armor) or an effect that limits the amount of allies you can have in play either definitively or punitively (Cave Burrow from TTT vs. Pursued by Shadow from JDtA), but without mitigating factors such as that, the majority of the time the burden is on the expensive cards to prove that you should put them in as opposed to their cheaper counterparts.

With events, due to their inconstant nature, this is even worse; any event has to fight to justify its inclusion in your deck (though A Test of Will pretty much wins that fight every time), and if it costs more than 1 resource to play, it's an uphill battle. If you want me to put something in my deck that requires me to trade in 2/3 of a typical three hero deck's resources for the round for a temporary effect, that effect had better be good. Now, this isn't a judgement for or against Anchor Watch; it's merely stating that, due to its card type (event) and cost (> 1), Anchor Watch has higher hurdles to clear than the likes of Wealth of Gondor or Sneak Attack.

That's dedicating 9 of your deck slots to constantly (theoretically indefinitely, actually, if you have some way of maintaining your threat and target Second Breakfast with one of the Tomes, recurring the Tome and putting Second Breakfast back on bottom of your deck, setting up the loop for in future) recurring Anchor Watch, providing you an overwrought solution to a problem that can be solved with 3 cards much more effectively (3 copies of your choice of defending staple; Gondorian Shield, Defender of Rammas, or the in-sphere Warden of Helm's Deep).

In addition, relying on Anchor Watch to handle defending necessitates that you save 2 resources for the combat phase, 2 resources that could potentially have been used to play permanent cards during the planning phase if you'd used a different defending strategy. The Dream-chaser cycle, the cycle of the box Anchor Watch is in, actually gave us a great defensive card that also costs 2 but unlike Anchor Watch is permanent, making the choice to use Anchor Watch as your deck's defensive option even harder to credibly sustain. In addition, though this is more something about the cycle as opposed to the card, Anchor Watch necessitates you save up resources for the combat phase...in a cycle with enemies who steal resources. This doesn't make Anchor Watch untenable, but it does make it a bit harder to use. Also, though this is smaller, Anchor Watch is a Response to an attack being declared against you, meaning that, just like Dori, you choose to use it or not before seeing shadows, though unlike Dori you can't use Anchor Watch to support other players ("an attacker against you").

Finally, Anchor Watch incentivizes you to run 3 copies of it in , the sphere with the worst card draw. This might make you want to run another sphere with better card draw, at which point Anchor Watch becomes relatively more expensive when it's already at the expensive point for an event. In addition, this makes Anchor Watch more inconsistent, which ties back into reason 2 (having a temporary, inconsistent solution to a persistent problem is not a good idea).

Now, there are still uses for Anchor Watch, but those uses are either more easily/reliably solved with other cards (Frodo Baggins is a good target for this, but Fast Hitch exists) or so specific that you need a law degree to define when they occur. In addition, there's the potential for rules weirdness (can I target a character with "Immune to player card effects" using this?). If you buy the Grey Havens, prepare to watch Anchor Watch anchor itself firmly in your sideboard or your binder.