Warden of the Havens

While the top card of your discard pile is an attachment, Warden of the Havens gets +2 and gains sentinel.

"...and if he comes, assailing the White Towers and the Havens, hereafter the Elves may have no escape from the lengthening shadows of Middle-earth."
Galdor, The Fellowship of the Ring
Dleoblack 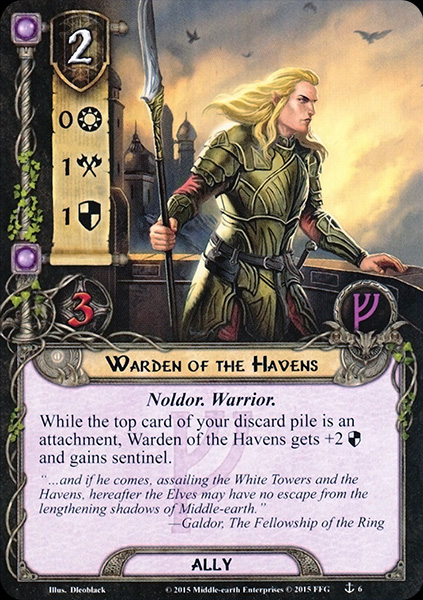 Warden of the Havens and Orthanc Guard have a bit of a problem; they're more expensive than Snowbourn Scout and Squire of the Citadel, but not exactly a lot more survivable. While Warden's sentinel can be helpful, (seriously, sentinel and ranged are huge in multiplayer,) and Orthanc Guard's readying could be nice, for (especially if Warden's ability isn't live) something that won't survive an enemy with 4 , that cost of 2 vs. 1 could be a deal-breaker.

Except they aren't just chumps.

While it could be argued Warden has 1 and Orthanc has 1 , that isn't what I'm talking about. Yes, they won't tank an attack from an enemy with 4 or more , (6 if Warden is active,) but there are still plenty of enemies with 3 or less; against those, Warden and Orthanc can block, and survive. You get two uses out of one chump. And, more importantly, if you can either heal them or preserve their , you can bid them a fond farewell as you send them to die against a boss with no fear of "Deal 1 damage to defending character" ruining your day. You aren't just paying 1 more for a chump; you're paying 1 more for a chump that might survive against some enemies, and has a built-in defense against "Deal 1 damage to defending character." Quality over quantity.

But what about the Warden himself? Without his boost, he's slightly undercosted, with his high making him a good damage soak for Archery, and his 1 coming in handy when you have a more-dedicated defender up and running. He's a valid target for Lords of the Eldar, which could make readying him (especially with Narya) quite good, and if you want to turn him into your main defender (for some reason,) you could put Elven Mail on him for perma sentinel and Hauberk of Mail for even more defensive goodness, or you could swap out the mail for a Raiment of War if you're confident of the top card of your discard pile being an event or you don't anticipate needing sentinel that much. In exchange for those two attachments, 2 and 3 resources, you get an ally who defends for either 2 and 5 or 2 and 4, or 4 and 5 if the top card of your discard pile is an attachment.

With his boost, the Warden becomes a bit more survivable, though 3 doesn't go as far as it did in the Core Set. Most of the time, though, I've found the sentinel to be more what I'm after, as I rarely play solo; a player winds up with an attack they didn't wish for, I discard an attachment for Protector of Lorien, Warden gains sentinel, and he handles the defense. Granted, that's only happened once or twice, but it was a memorable experience.

Overall, Warden of the Havens isn't top tier, but he's not exactly binder material either; put him in a deck with some way of discarding cards from hand, or even just in a deck that's going to have spare resources kicking around, and I think you'll be pleasantly surprised by the results.

Any location attachment that would go to your discard after exploring a location in the quest phase.

Any of the four Record attachments, like Tome of Atanatar.