Attach to Círdan the Shipwright or Gandalf.

Action: Exhaust Narya and attached character to choose and ready up to 2 allies. Each of those allies gets +1 and +1 until the end of the phase.

"For this is the Ring of Fire, and with it you may rekindle hearts in a world that grows chill."
Círdan, The Return of the King
Lucas Durham 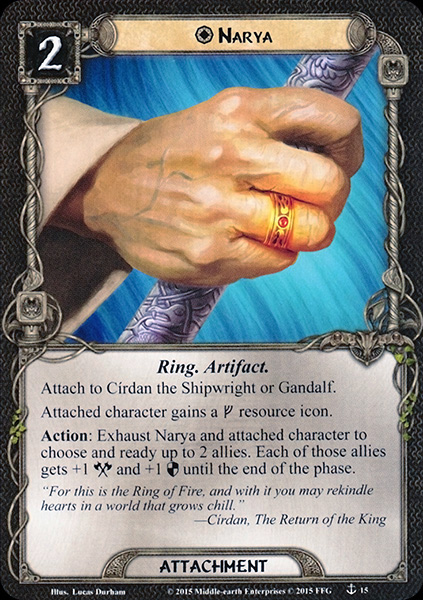 Narya is a fantastic attachment, easily earning its place among the other Elven rings. First, unlike the other rings, it has two valid targets, one of whom can be found as an ally (who doesn't go away at the end of the round), Cirdan and Gandalf. Gandalf is a fantastic target for this; sure, you're going to be raising your Threat by 2 every round and it costs 7 to play, but 5 and 5 plus another ally readied is nothing to sneeze at. But the main reason I say Gandalf, especially OHaUH Gandalf, is a great choice for Narya can be summed up in one word; readying. Gandalf has in-built readying, and the potential for more to get more use out of his boosted stats if you throw in Shadowfax. Sure, that's two cards in your deck dependant on drawing one specific other, but 5 ranged or sentinel, twice, is quite worth the risk, I'd say.

Something interesting about the rings in the game; most of them are quite versatile. Vilya may not get what you want in play, but a free card is a free card, Nenya is less versatile, but does give you the option of adjusting questing after staging, and Magic Ring provides neutral healing, resource generation, or readying. Narya is as versatile as the best of them, providing wonderful support capabilities or raw statistical power. Not questing for enough? Abuse Faramir's lack of "Limit once per phase." Need healing? Ready a Warden of Healing or two. Desperately digging for a card? Ready Gleowine. Two attack power short of killing a boss? Ready two allies, even support ones. Need an extra defense in multiplayer? Ready a friend's Warden of Helm's Deep. With Narya, the limits are the allies you have in play and your imagination.

But what about Narya's costs? 2 neutral isn't bad for something this good, but exhausting a hero with 4 or a statline like Gandalf's is a bit hard to stomach. Fortunately, Círdan the Shipwright hails from the sphere with Light of Valinor, or Unexpected Courage if you don't want the Glorfindel player to swear an oath as terrible as the Oath of Feanor in pursuit of it. Plus, as the wonderful blog Tales from the Cards pointed out, if you exhaust Cirdan to ready a Guard of the Citadel, you technically have his ; if you ready a Snowbourn Scout, you have his . Sometimes, low stats can be a blessing. You only really need Cirdan's , so one readying effect on him along with Narya and you're set. Gandalf, on the other hand, has arguably less in-sphere access to readying, and a better statline, forcing you to ready an ally with at least base 2 or if you want to get combat stats at least equivalent to Gandalf's. I'd personally argue that Cirdan is a better target for Narya than hero Gandalf (though, again, OHaUH Gandalf is an amazing wielder of the Ring of Fire,) though this does give a rather amusing gameplay win; like many of his other toys, Gandalf with Narya forces you think about how you're going to use it. Sure, your friends will whine about having a ten-minute planning phase AND a ten-minute combat phase, but you're the Gandalf Guy, you're used to them whining (not that you have friends who whine. They all foreswore playing LotR with you when you brought your Hero Gandalf deck with scrying antics.)

Overall, Narya is a fantastic card. It's flexible, with readying it's downright amazing, it's not horribly expensive, and very rarely will you be unhappy to draw into your first copy. If you're running Cirdan or Gandalf, throw this in with wild abandon. If you're running Gandalf, use your own judgement for whether or not you can use it effectively, but I'd personally throw it in all the same. Ally readying is really useful, and at the very least, the resource icon could be somewhat nice.

(Seriously, though, that resource icon is bigger than you'd think.)

AlasForCeleborn 525
Absolutely hilarious review, especially that third paragraph! I much agree with what you said. I didn't think it would be worth missing out on Cirdan's willpower (I don't have Foundations of Stone), but even sacrificing questing with him most rounds just to use the ring still gives incredible value. — Roryn 2 9/23/20