Attach to a Warrior character. Raiment of War counts as 2 Restricted attachments.

The Thing in the Depths #34. Tactics. 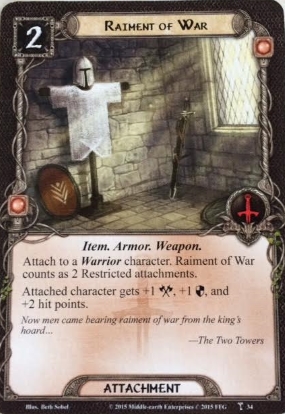 Raiment of War is quite possibly one of the best attachments to come out of the Dream-Chaser cycle, not including the box. Granted, against In Service of the Steward and Hithlain that isn't particularly notable, but I would say it even holds up against the likes of Armored Destrier and Strider.

Raiment of War is, at 2 cost, a relatively affordable card, though its real cost is its opportunity cost. To be precise, what restricted attachments do you forego by playing Raiment of War on someone?

I would argue that, for most heroes, Raiment of War is not worth this cost; Beregond hits higher with a Gondorian Shield and can take another restricted card, Amarthiúl cares more about the quantity of defenses you can make with him as opposed to the quality so Armored Destrier is better, Gimli prefers Citadel Plate, and Beorn can't have attachments at all. While it could be interesting on Boromir, the fact of the matter is the majority of the time your heroes will prefer restricted attachments that provide a more specialized stat boost as opposed to Raiment of War's general one, and typically can find them.

But what if they can't?

This is where a key word in Raiment of War's text box shows its quality; "Attach to a Warrior character." Not a Warrior hero, a Warrior character, meaning it can go on allies. Allies who can only take about half the Weapons in the game and less than half the Armors. In short, allies who by taking Raiment of War pass up very little else. While Ered Mithrin has dulled some of Raiment of War's shine in this aspect by introducing more restricted attachments allies can take, like Round Shield, Raiment of War is still a solid choice for taking up the restricted slots of an ally who would otherwise have nothing: Defender of Rammas doesn't die to "Deal 1 damage to defending character" shadows anymore, Jubayr becomes even more indestructible, Guardian of Rivendell reaches eye-popping combat stats, Defender of the Naith actually becomes worthwhile to ready, and Knight of the White Tower reaches a stat total that would, if on a hero, make them tie with Gandalf for starting threat.

Raiment of War is overall a lot like the decision to send the Ring into Mordor to be destroyed; choosing it may end up being the right decision, but it is a decision primarily made because the chooser has nowhere else to turn. If the Council of Elrond had had the capability, they probably wouldn't have chosen to send the Ring into Mordor, instead opting for a less-risky route, just like Raiment of War is typically passed over once more specialized restricted attachments are made available. But, for most allies, as with the Council, they don't have that capability, and so make do with what they have. And, just like the Council's decision, sometimes this decision can prove to be a very wise one.

AlasForCeleborn 509
Good for Gimli — nelloianiro 915 8/5/20
Ally Gimli, perhaps, but his hero variants have other restricted attachments that they'd prefer; for Tactics Gimli, Citadel Plates are superior, while for Leadership Gimli I believe Armored Destrier or Ancestral Armor would be better. — AlasForCeleborn 509 3/11/21
5

A really good attachment, which can transform some characters which have little use for their restricted slots into very good support. Defender of Rammas, Jubayr, Déorwine, Gimli, Veteran of Osgiliath and Galadhon Archer are amongst some of my favorite targets, but it can also help heroes like Glorfindel, Grimbeorn the Old, Boromir or Fastred