Knight of the White Tower

Knight of the White Tower's resource cost must be paid from a single hero’s resource pool.

"...to be only a man of arms of the Guard of the Tower of Gondor is held worthy in the City, and such men have honour in the land."
Beregond, The Return of the King
Owen William Weber

The City of Corsairs #139. Leadership. 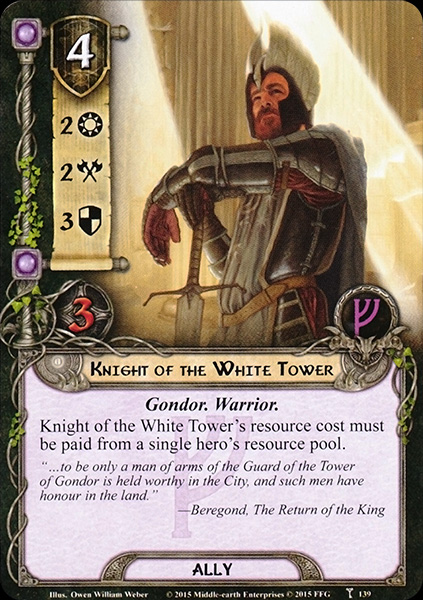 Knight of the White Tower's additional "cost" is honestly so easy to bypass that I hesitate to call it a cost. First off, the fact that he's 4 cost means that he's expensive, which means that you're most likely going to want resource generation to help pay for him. As far as I know, there are 3 resource generation cards that add resources to multiple heroes' pools, meaning that the majority of resources your resource acceleration generates will go on 1 hero; in order to pay for the ally who you can only use 1 hero's resources to pay for, you pretty much need to generate 4 resources using cards that typically add resources to 1 specific hero, making the additional cost effectively moot. And, of course, just like with his buddy Guardian of Rivendell, the additional cost only triggers when you play him from hand, meaning that cheating him into play with the likes of Prince Imrahil, A Very Good Tale, or Timely Aid completely bypasses it.

But all of that's just to play him; is he any good once you do get him into play? Most certainly. 2 is useful when questing's an issue, 2 is very good, 3 is also very good, and 3 means that he can take a few points of archery if need be. Now, it is true that Knight of the White Tower's stats are very well-rounded, many times the bane of characters who would appreciate a bit of decreased cost in exchange for losing a stat that they'll most likely never use, but that's the thing; there really isn't anything Knight of the White Tower won't use. 3 and 3 makes him naturally a good defender, but unlike the likes of Beregond or Winged Guardian he's not useless if you don't need a defender or if you have other defensive options. This is where his 2 really shines, allowing him to shift what combat role he fulfills depending on the situation. It also means that, unlike most other defending characters, drawing additional copies isn't totally worthless once you get the first one out. I've gotten 2 or 3 Knights out at the same time and wasn't sad to see any of them hit the table, unlike, say, Gondorian Shield where additional copies just clog your hand.

Oh, and all of this? The 2 when questing needs it, the Denethor levels of bulk or Veteran Axehand depending on what you need in the combat phase? That's all without any support, what I would consider to be an unrealistic scenario, especially considering the cycle Knight comes from. The Dream-chaser cycle introduced player cards that tried to incentivize multi-sphere decks. Now, there are some hits and some misses, but the concept was still there. And you know what? Knight of the White Tower really likes multi-sphere decks; due to the resource restriction you can only use 1 hero to pay for him, meaning that only having 1 hero isn't as debilitating as you might expect, and having access to other spheres gives Knight of the White Tower some very nice support:

- gives you healing, allowing you to use the Knight for even more defending or archery soaking without worrying about them dying. - allows you to put Raiment of War on Knight, turning him from Denethor into a monstrous 2 , 3 , 4 , 5 beast. -And my personal favorite, allows you to use Círdan the Shipwright, which allows you to use Narya to both help play Knight of the White Tower (using the resource icon it gives) and ready them in the combat phase to effectively get 2 uses out of an ally that has stats that, on a hero, would have a higher threat cost than Celeborn.

Of course, there's also the in-sphere options of Boromir and Visionary Leadership to give him 3 of everything and either Faramir to either boost his or get more readies out of him.

Now, Knight of the White Tower isn't for every deck, 4 is definitely more on the expensive side, but don't think that means he's an auto-cut like poor Brok Ironfist; Knight of the White Tower might be expensive, but he's worth every penny, and if you include some tools to help you get him out quicker, it'll feel like it doesn't take very many of those in the first place.