Response: After a Dwarf hero you control leaves play, put Brok Ironfist into play from your hand.

...there is no knowing what a Dwarf will not dare and do for revenge and the recovery of his own.
The Hobbit
Even Mehl Amundsen 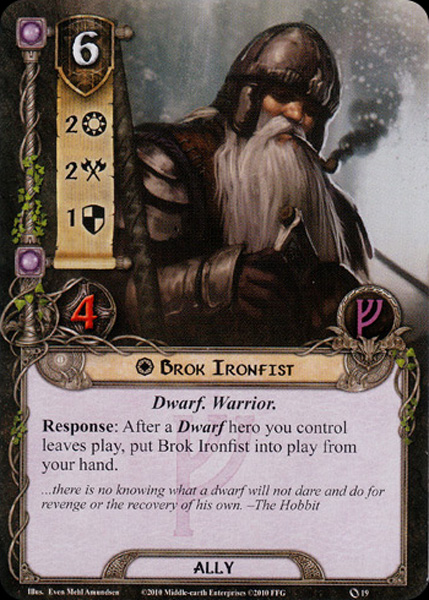 This card could be fixed with one simple line of text:

After you play Brok Ironfist from your hand, he loses the ally card-type and gains the hero card type.

This would take him from coaster to boaster in no time!

I did consider after he enters play, but that would mean with Sneak Attack you'd be getting an extra hero for just 1 resource, so I think having to pay 6 resources in the sphere for a hero is not too bad.

Alternatively, he could be fixed by simply reducing his cost to 4 with no other changes and then he would be an auto-include in any dwarf deck as an insurance in case you lose a hero but without being a wasted card if not.

Aurion 763
That is such a great idea. I'm just imagining how fun it would be to take a big hit to a Dwarf hero, Landroval swoops in dropping Brok into the fray from his talons, plucking the unfortunate dwarf from the abyss and turning disaster to triumph. A 5 cost manoeuvre with the right level of payoff. — Dor-lomin 67 12/28/21
7

Brok Ironfist is... not a good card. For starters his stats - rule of thumb for allies is that cost should be around half their sum of stats. Brok has a total of 9 stat points, so by that logic he should cost 4 or at most 5 resources, not 6. Furthermore, almost every ally in the game has a useful ability to back up that stat-to-cost ratio - Brok Ironfist on the other hand gives no useful ability for those resources since his only ability is an alternative means of getting him into play. Put simply, Brok is by no means even remotely worth the number of resources he costs unless you use his ability to put him into play. It always seemed to me that his excessively high cost was given specifically to encourage putting him into play using his ability instead, but in practice that's really not how it works - it doesn't encourage using his ability, it merely discourages playing him normally, which just goes to further ensure that he will only be used if putting him into play with his ability is worth it since paying for him isn't.

So, how about that ability then? Well, in principle, I can certainly say that losing a hero and getting a free ally is better than just losing a hero, but there also exists the third option of just not losing a hero in the first place. While there are exceptions, in general decks are built to follow a certain game plan which does not involve losing heroes. If you do lose a hero, it often heralds an impending loss, so unless putting Brok Ironfist into play will be enough to keep you in the game, it's not really worth including him - you'd be better off just losing faster so you can try again and do better next time. And your deck will likely be better and more consistent if you include some other card instead of Brok, which will be useful in a wider range of circumstances rather than being useless most of the time and maybe saving a game once in a blue moon.

Now here's where Brok could actually be OK if he wasn't so wildly over-costed. If he cost 4, and maybe had some other useful ability while he was in play - perhaps something which could help compensate for the loss of a hero - then he might get included in decks because he could serve as an emergency valve if a hero was going to die but still not be a totally dead draw if all heroes were alive and well. That hypothetical alternative Brok Ironfist could be a pretty interesting card, whereas the existing one falls flat through not only being bad, but also being boring.

If one were to try and use Brok for some reason, there are a few points to consider. Obviously he's more useful if Dain Ironfoot is in play, or other Dwarf synergy. Even under those circumstances, it's still not really worth paying for him especially since there is a plentiful supply of good Dwarf allies, so you should be looking for using his ability. But we can draw a clear comparison in the existence of Caldara (and experience of playing with her) that while trading a hero for two allies can be worthwhile, trading a hero for one ally isn't. So I would only consider using Brok if I had some other reason for wanting to kill a hero, at which point I would refer you to my review of The Fall of Gil-Galad. I would say The Fall of Gil-Galad is a much more worthwhile trade-off for a dead hero however, and there aren't necessarily a lot of good targets among Dwarf heroes for such a setup. Brok has one advantage over FoGG in that he's not limit 1 per deck, but he's also not quite as easily searchable, being a Dwarf ally rather than a Song attachment; and ensuring that he's in your hand at the right moment for you to sacrifice a hero to put him into play is still a significant potential problem with the setup, to say nothing of the problem with duplicate copies clogging up your hand (duplicate uniques are of course a widespread problem, but generally the unique cards you'd have 2 or 3 copies of are considerably more useful to you than Brok Ironfist, plus there are some means by which unique cards can leave play and you can then replace them, which is impractical for Brok given his extortionate cost).

In the end, it's certainly possible to make some use of Brok Ironfist. It's complicated and shenanigans-y, and difficult to pull off consistently - but despite all that, I would personally say it's even harder to think of a reason why you'd even want to use him (other than 'to prove it can be done'). Save yourself the effort and just use cards which are actually good.

Warden of Arnor 4967
I've had some success (and by success I mean not a complete failure) with using The Fall of Gil-Galad with Gloin and Brok Ironfist - if you like shenanigans it is quite cool when it works. I've published the deck (https://ringsdb.com/decklist/view/5738/the-fall-of-gil-glin-1.0) - Galadriel's Mirror is fairly vital as it means you have a reasonable chance of getting both Brok and Fall of Gil-Galad before the games ends... — hobbitalastair 6 7/7/17
If you want to do something completely pointless, run a Denethor/Treebeard/Thalin deck with a ton of card draw so you can get Sword-thain, Song of Mocking and Brok in your hand without spending resources. Then, put Song of Mocking on Thalin, trigger Treebeard 4 times, and kill him. This puts Brok into play for free and you can now play Sword-thain with your remaining 4 resources! Not too shabby. — emorlecallor 1157 7/24/17
4

Brok Ironfist is terrible. You're paying an incredible six resources for only two willpower or attack or for a one four defense. If you're planning on using his response, you're in trouble because if a hero is leaving play, good luck.

I used Brok in the early decks only as an insurance in combo with Fortune or Fate, and only in rare situations, when Glóin was killed for one round. It worked well but playing him in standart deck was too costy for what he can do. From time to time I used him with Sneak Attack, but never really paid for him. But now, when I finally have Dáin Ironfoot I wonder if he can get better...and also heading for khazad-dum AP's. So we will see... and the artwork is great. Verdict: 3/5.

Brok is... not a bad card, as long as you don't pay for him. His 6 cost is unmatched in the game (except by Beorn) so he makes a great target for A Very Good Tale, Flame of Anor or Taking Initiative (or, in some scenario with treacheries focusing the highest cost ally, as a shield for valuable 5-cost allies).

There are some ways to sneak him into play at a discount (for example Timely Aid or Send for Aid) but usually you will have a better ally to put into play instead .

So if you want to play him, you have to use his ability. Another review was presenting The Fall of Gil-Galad, here are two other possibilities :

Simple. You can pay five resources for Gandalf or six for Brok. Or pretty much anyone else with an ability that helps you when you haven't lost a hero (and all of their attachments, traits and abilities.)