"Indeed there is a power in Rivendell to withstand the might of Mordor, for a while."
Gandalf, The Fellowship of the Ring
Tawny Fritzinger

Flight of the Stormcaller #10. Neutral. 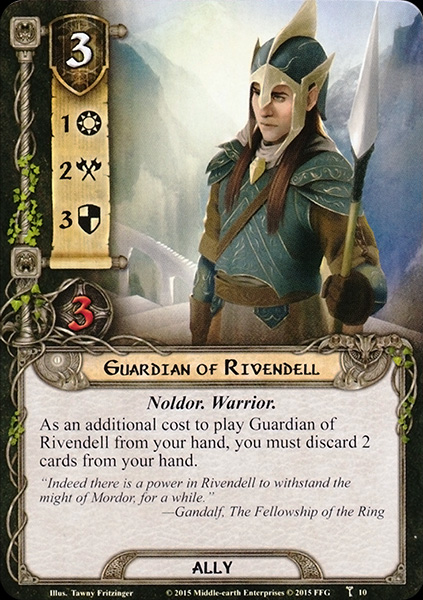 Aside from the weird Legend of Zelda Zora-esque armor, Guardian of Rivendell is an amazing card. First, those states: 3 cost is a bit expensive, but him being neutral means that you can play him the turn you draw him in a 3 hero deck, and his cost-to-stat ratio is Ent-worthy, with 1 that you probably won't use most of the time, 2 that you will use sometimes, and 3 and 3 that you'll use a lot of the time.

However, speaking of cost-to-stat ratios brings up his text box and the additional cost it incurs, in the form of forcing you to discard 2 cards from your hand before playing him. However, while this additional cost can be troublesome at times such as if you have a lot of card discarding effects or poor card draw in your deck, most of the time it's just a minor nuisance, if even that.

The additional cost also helps point players in the direction of which decks Guardian of Rivendell fits best in, those being Noldor, , and especially .

Guardian of Rivendell's Traits and card discarding firmly establish him as a card for Noldor decks, providing them with another way to get Elven-light in the discard pile as well as some fairly strong combat prowess that isn't dependent on using Stand and Fight to special-summon an off-sphere ally from the discard pile. In addition to being a very good target for Narya if you're running Círdan the Shipwright, Guardian of Rivendell is also a great target for Lords of the Eldar, becoming an absolute beast in combat and a semi-competent quester if need be.

He also provides previously somewhat lacking combat prowess to , with his cost being mitigable either through Dwarven Tomb, Silver Harp, Elven-light, Lords of the Eldar, and Glorfindel. Once again, if you're running Círdan the Shipwright, Guardian of Rivendell is an excellent target for Narya, as well as ally Arwen.

However, it's in that I would argue that Guardian of Rivendell really shines. In a sphere rich in card draw but poor in resource acceleration and somewhat poor in combat power, especially outside of unique allies like Quickbeam, Guardian of Rivendell fits like a key in a lock. His additional cost can even become a bonus in , allowing you to potentially draw cards with either Galdor.

Guardian of Rivendell is quite possibly one of the best neutral cards from the Dream-chaser cycle, outside of Narya, providing a dramatic boost in combat power to and and a lesser but still appreciated boost to and . While the Guardian of Rivendell may be boring (aside from that weird art), as cards like Éowyn, Defender of Rammas, and Marksman of Lórien have shown time and time again, boring doesn't have to mean bad.

AlasForCeleborn 464
Marksman of Lórien boring? what?! Sorry but I used her in Imrahil Deck, and also on a Silvan decks. They ways she can get enter or not into play, y so funny to see. — Libro Rojo 309 7/31/20
Even when you manage to find Marks(wo)man of Lorien using Tactimrahil, all that does is get her cost down and make it so that you can trigger her ability multiple times, and said ability is a straight-up combat bonus. Markswoman is straight-up beef, providing you with, outside of 1 spare hitpoint, nothing distracting from her core mission of killing things. Now, this isn't to say that she's bad, I actually think she's almost too good, but I would say it makes her less fun or at least less interesting than the likes of Galadhon Archer who do something outside of provide you with overwhelming stats. — AlasForCeleborn 464 8/1/20
If this card was the last card in your hand could you play it? Or do you have to be able to discard cards in order to play it? — ahez20 41 7/12/21
@ahez20 - No the discard is a hard requirement. If you can get in into play without playing him directly from your hand, like with Vilya or a Very Good Tale, then you wouldn't need to pay that cost. — peacefrog3 10 7/12/21