Galdor of the Havens

Response: After drawing your setup hand, instead of taking a mulligan, you may discard any number of cards from your hand. Then, draw that many cards.

Action: If you have no cards in your hand, draw 6 cards. (Limit once per game.)

"What power still remains lies with us..."
The Fellowship of the Ring
Lukasz Jaskolski 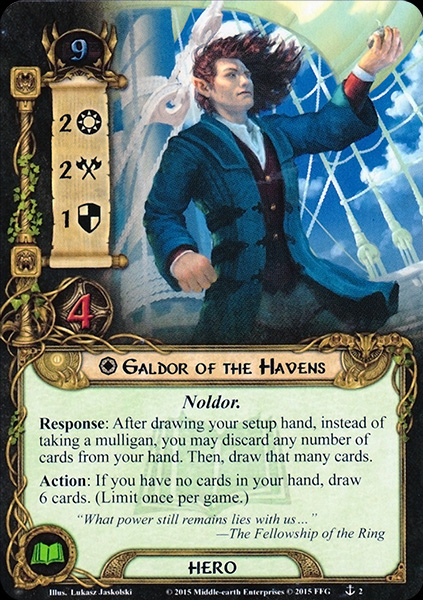 My first impression of Galdor of the Havens was that I was not excited...neither about the art which depicts him as an 18th century colonial sea captain holding a hand mirror which he is using to admire his flowing auburn locks... nor his ability. Now that I've finally gotten around to dipping my toes into Noldor decks, I've found that Galdor of the Havens has shown his true colors through play, and forced me to reverse my opinion on him. He has grown on me, both art and ability.

First, I should talk about the stat line. I have developed a personal deckbuilding rule that if a hero has a starting below 10, I can forgive mediocrity. If a hero has a starting above 10, he'd better have some solid stats/abilities or he is not going to see much play in my decks. Perhaps I'm biased because I still can't bring myself to build decks with a starting of 30 or greater, but Galdor passes my rule with flying colors... being both below 10 and having a worthy stat-line and ability.

For the 9 starting we get a 2/2/1/4 stat-line. I like this line because he passes another one of my rules, and that is if a hero has a < 2, he is almost unusable to me without having an absolutely essential ability for the deck I'm running. With the acceptable , he can also serve as a supplementary attacker and even has enough to pinch hit as an emergency defender. Being an ok quester, ok attacker, and marginal defender, his stats and Noldor trait make him a decent target for Light of Valinor or other more generalized action advantage.

Ability-wise, I tend to think of him as sort of an "Erestor lite", which I consider to be a good thing since I've found Erestor's play style to be a bit too jarring and extreme for my taste. His ability has two parts, and the first one is quite unique. It's the first ability in the game that messes with the initial draw prior to setup. What is not immediately apparent unless you are a good statistician is how much using his discard/draw ability in place of a mulligan improves your chances to get a specific card essential to your particular deck design, or maybe even a combo piece if you already have that specific card in the initial draw and discard the other 5 cards to draw 5. Without bogging this down with statistics that I have absolutely no desire to do, I've found through gameplay that this has been extremely useful in greatly increasing the frequency of getting that card you need that starts the engine (like trait specific cost reducers), or simply optimizing the starting hand... discarding any duds (high cost cards too early, unique duplicates, etc.). Furthermore, this even combos with Noldor deck synergy in allowing you to discard cards that can be played from your discard pile and replace them in your initial draw. It might not sound like much on paper, but it actually works great.

As far as his other ability, it's decent card draw in and of itself. It especially goes well with Noldor synergy, where you have a lot of control over what you discard, and the "once a game" 6 card draw feels even more like a giant boost. Drawing 6 cards at one time is nothing to sneeze at, even if it is conditional and only once a game. It can be used either to help set up a combo piece or super charge a Noldor deck at the right time.

All in all, Galdor of the Havens has surprised me in rising to the ranks of one of my favorite heroes. If you haven't tried him yet, I'd definitely encourage it...especially with the Noldor archetype.

MDuckworth83 3074
With Protector of Lorien, he can become quite a solid hero. — Lecitadin 184 8/22/16
Could not agree more with your assesment. He is a powerful addition to a Noldor deck and helps with several comboes. You can use him in combination with To the Sea to play an expensive Noldor ally first turn by discarding the rest of your hand and drawing straight back up to six. You can discard all your cards for multiple heals from a few Imladris Caregivers only to draw straight back up to six. In the right deck you will use his second ability in every single game and those six cards may be the difference between winning and losing. — Psychorocka 461 9/3/16
It's a sundial compass! And you changed my point of view on him, great review. — AlgoFl4sh 1 4/11/17