Response: After Marksman of Lórien enters play, choose an enemy. That enemy gets -2 until the end of the round.

"Keen are the eyes of the Elves."
Aragorn, The Two Towers
Drazenka Kimpel 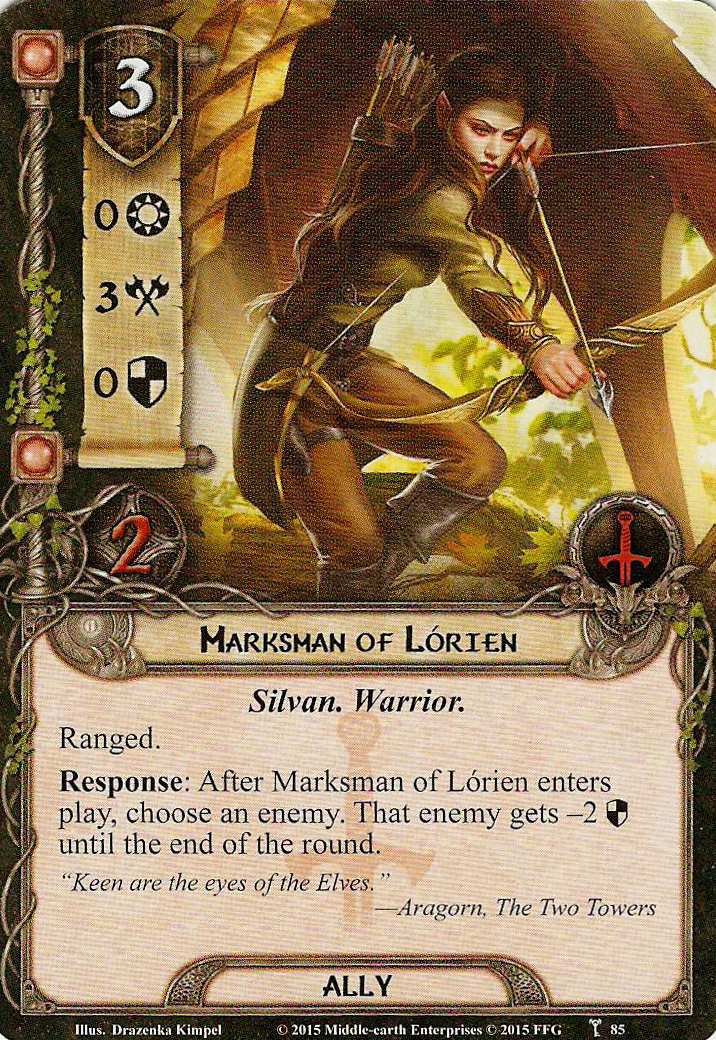 First off, comparing them to the gold standard attacking ally, Veteran Axehand. Marksman of Lorien costs 1 more for 1 more and 1 less in exchange for ranged, and their enters play effect. Ignoring their response, Marksman is a simple case of more expensive than Veteran Axehand in exchange for higher with ranged. But such a simple explanation is doing the Marksman a disservice; that ranged has proved incredibly helpful in several of my games, and 3 in one character is honestly really helpful sometimes, especially when you have readying available like Narya. And Narya really illustrates the main point about the Marksman; they're 3 cost for 3 with ranged.

And they can get better.

Naryaing an ally with ranged, boosting them up to 4 and readying them to attack again, maybe with ranged, is ridiculous, and it gets even more absurd once you get multiple Marksmen out. For reference, the Siege Ship from A Storm on Cobas Haven is one of the toughest enemies from the Dream-chaser cycle at 5 and 7 . That's as much bulk as the Hill Troll from the core set. And yet, when I'm fully set up, with Narya, multiple Marksmen, and Narya, I can reliably just discard those behemoths once I'm done with enemy attacks, and have 8 ranged ready to squash whatever other enemies have engaged me.

Since they're a Silvan, Celeborn also boosts these allies, giving them 4 where you need it the turn they enter play. And speaking of entering play, we haven't even talked about their enters play effect. After they enter play, you give an enemy of your choice -2 , effectively making Marksman a 5 ally the turn they enter play, and unlike Rúmil or Galadhon Archer, there is no engagement restriction on which enemy you target, so you could theoretically target an enemy in the staging area so that either Dúnhere or Haldir of Lórien can snipe it come the combat phase. Combine that enters play effect with Celeborn's boost and you hit (pseudo) 6 , the magic number to kill most enemies. Yes, that is only for one turn, but then they go back to a 3 ally with ranged, which is like saying you lost half your wealth and now only have $50 billion.

And, once more on the subject of entering play, Marksman of Lorien is a Warrior. You know who else is a Warrior? Prince Imrahil. Prince Imrahil with the Marksman is so ridiculous it's unbelievable. Being able to drop them for 1 resource, trigger their enters play effect, and get an attack or two out of them before shuffling them away so you can trigger them again later is hilariously good. Honestly, if you're using Prince Imrahil's ability to dig for an attacking ally, the only better option I'd say you could find is Beorn.

All in all, Marksman of Lorien might be a bit expensive, but they are worth every penny of their price. Two means they can take a point of direct damage without dying, ranged is more helpful than you'd expect, and 3-5 pretty much means if you can hit something it's gonna die. In a deck with fairly slow resource acceleration you may want to take a pass on the Marksman, but even then I'd say seriously consider them just because of the value you get for their cost. And, if you're running a deck that can consistently play the Marksman, whether through resource generation or cheating, you should already be sleeving them at this point or hunting for the Drowned Ruins.

This is an amazing card for battle quests. If you are going for an "archer deck," you definitely want at least one of these in it. I find it works best to have all three in my deck, but I am playing an extremely "Tactics" type deck. When you get all three of these in play and have Legolas as a hero, you are able to destroy any threat the other players playing, might face (thanks to Ranged). Three of these and Legolas combine to make a sweet combat deck but you can't forget its brother, the Woodland Courier. This allows for great questing, combat, and an overall elf themed deck.

Besides the awesome combat sided characteristics, the skill is not shabby, but it will not work very well on bosses like the witch king, that cannot be affected by player card effects.