Response: After you play Rúmil from your hand, choose an enemy engaged with a player. Deal X damage to that enemy where X is the number of ranged characters you control.

...the Company set out again, guided now by Haldir and his brother Rúmil. The Fellowship of the Ring
Melanie Maier 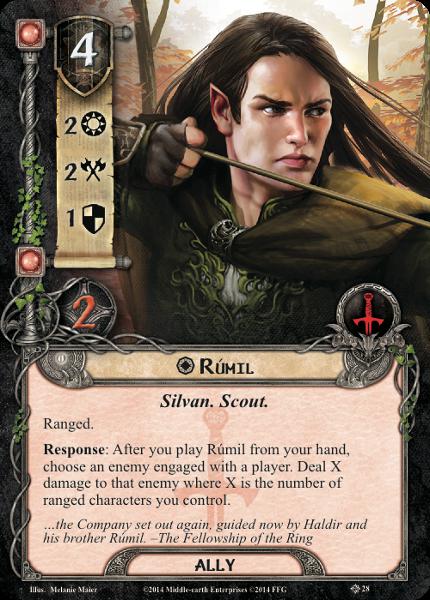 As far as the stats go, flexibility is more useful in heroes than allies, but the fact Rúmil can switch as required between using his 2 and his 2 Ranged may come in handy. And obviously if there are readying effects available for allies then both can be used in a single round. On the other hand it may be simpler to have other allies for questing and attacking so you can do both every round without readying. As far as the attacking goes of course Galadhon Archer is the obvious choice.

The ability is where Rúmil should be winning us over, but as I said, it will often miss its opportunity. Firstly and significantly, note that unlike the other Silvan allies released in the Ring-maker cycle, Rúmil's ability only triggers when he is played from hand (during the Planning phase), not when he enters play through other means. Now, since Rúmil is Ranged himself, the effect will deal a minimum of 1 damage to an engaged enemy. A dedicated combat deck may well have 1-2 Ranged heroes as well, and if we add in allies like the aforementioned Galadhon Archer, Vassal of the Windlord, Trollshaw Scout and so on, it's pretty easy to get a high enough number of Ranged characters in play to instantly kill most enemies. So why am I not raving about how great this is? The answer is simply that in my actual play experience, if I have that many Ranged characters in play, since they're all good attackers the enemies are dead by the end of the combat phase and so by the time I have an opportunity to play Rúmil the following round his ability is redundant.

In quests that swarm you with enemies (for which direct damage tends to be a pretty good approach in general), and of course as player count rises, Rúmil is more likely to have a target. He can also be used to kill an enemy which you engaged during the Planning phase, by e.g. a Dúnedain Hunter, Knight of Minas Tirith or Westfold Outrider so it never has an opportunity to attack you. And of course he can be used to kill an enemy which you either couldn't or didn't want to kill the preceding round - beyond the usual case of insufficient , there are of course enemies like the Mûmak or the Oliphaunt which can take a limited amount of damage per round, where once again Rúmil could save you an attack, or perhaps a boss enemy which couldn't take damage until some condition was fulfilled; as to not wanting to kill an enemy, the most likely case would be if you kept a high enemy alive to put a Secret Vigil on it then Rúmil could once again kill it in the Planning phase and save an attack.

So there are certainly uses, and the ability is unquestionably a very powerful one when it works - the only problem is that by the time it's possible it is often also unnecessary. Rúmil is a good ally, but it's definitely worth being aware of the difficulties.