Response: After Dúnedain Remedy is attached to a hero, heal 1 damage on that hero. 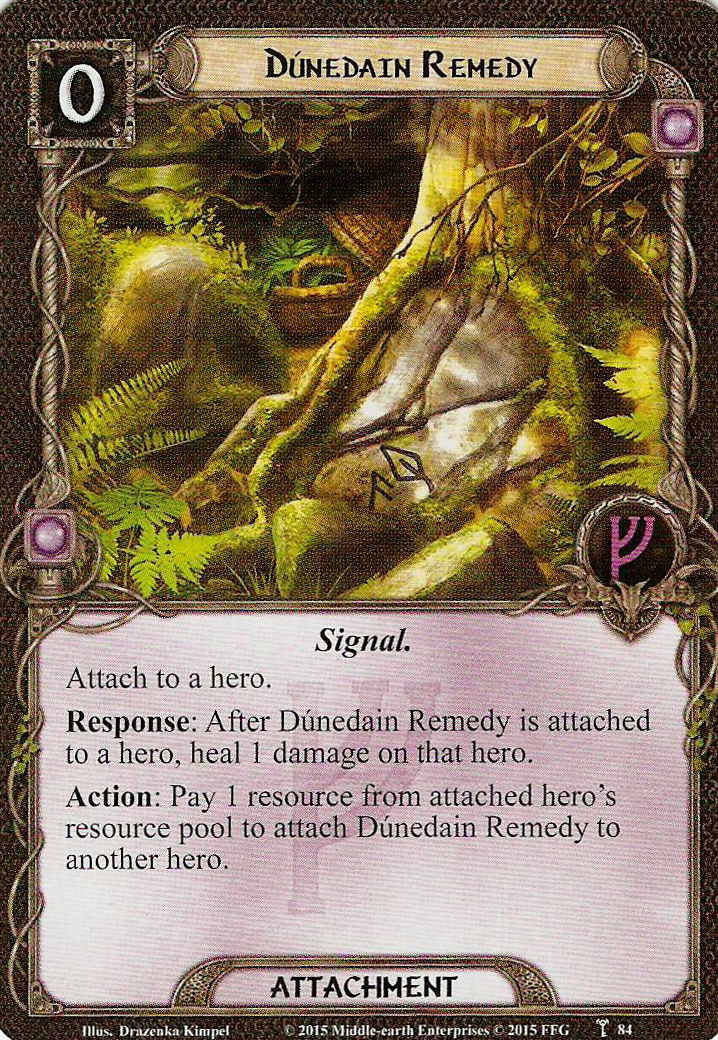 I'm surprised this card hasn't received any real buzz on this page (although I've seen it appear in quite a few decklists. For me, this is my favorite and in my opinion, one of the best healing options out there. It might stem from the fact that Lore is my least played sphere and I always seem to have at least one leadership hero in most of my lists. It's a free heal the turn it comes out and while it's cost efficiency does eventually lose to cards like Ioreth or Warden of Healing the payments aren't dedicated to particular player or resource which is nice.

If Elrond is out then obviously this gets even sillier. My experience has shown me that this card can really clean up archery damage. Not to reference the two allies above but another plus for this card versus the allies is that it doesn't require any exhausting to trigger, meaning you have more than just one shot at the healing.

Not much more to say about this card. I think enough people have seen its versatility and just how much it can save Heroes. I guess a downside is you can't heal allies with this, but that's a pretty minor negative depending on the decklist.

There a few memorable moments in this game's life, from its release with the Core Set to the start of its hiatus after Fortress of Nurn. One of those memorable moments, in my opinion, is the release of the Long Dark. This one Adventure Pack neatly divides the entire card pool into two periods; B.W., or Before Warden, and A.C., Anno Custodi, in the year of warden. Which warden am I talking about? This guy, of course. As a multiple use healing card (unlike Lore of Imladris) that can target allies (unlike Daughter of the Nimrodel) without requiring you to predict ahead of time who's most likely to be damaged over the course of the game (unlike Self Preservation), Warden of Healing effectively conquered the healing market, becoming the gold standard in healing overnight. After his release, any healing cards would face an uphill battle if they wanted to be included. Galadhrim Healer? Nice, but in 2 turns or 1 turn and 2 resources, Warden's better. Imladris Caregiver? The only reason they aren't immediate binder fodder is because they don't exhaust to heal and they have 2 so they don't die to Evil Storm. Ioreth? Free to play, and the healing's a more potent burst as opposed to Warden's more diluted group healing. However you provide it, if you're a healing card released A.C., you are going to be compared to Warden of Healing, and if you're found wanting, you will see as much play as Common Cause.

Dunedain Remedy, on the surface, appears to be destined to see as much play as poor Corefindel; it's a free point of healing, yes, but only 1 point, and after that any more healing you want to get out of it costs 1 resource, just like Poorfindel. And, just like the poor Noldor, it can't just be any resource; it has to be a resource on the hero with the Remedy, meaning it could potentially get stranded attached to a hero who's perpetually hungry for resources like Aragorn while damage builds up on your other heroes.

And it has to be heroes; just like Daughter of the Nimrodel, Dunedain Remedy can't heal allies, making direct damage to your questing allies even more hazardous and any damage annoying, as it's more likely to linger on the card and disrupt an otherwise physically smooth surface.

So, Dunedain Remedy's expensive, minimal, and restrictive. And it's the best healing card A.C., and for one reason; its sphere.

Dunedain Remedy is , just like the other Signals, one of three healing cards outside of . This changes the game; for the first time, you don't need to splash in your deck just in case direct damage starts worrying you. Now, every sphere except for ( has Stand and Fight and Reforged to get off-sphere healing cards into play) has healing options, and with Magic Ring's release even that problem was solved.

Later in the cycle, Rune-master was released, helping Dunedain Remedy along by somewhat mitigating its resource cost. But even without Rune-master, Dunedain Remedy is still an amazing card, if only for the deckbuilding opportunities it opens up; no more does the appearance of direct damage force you to include in your deck (Druadan Forest is a biiit iffy, though).

Yes, Dunedain Remedy isn't the best healing card in the game, or even necessarily that good. It's basically Corefindel as an attachment with the first use free but without the ability to heal allies. It's expensive, minimal, and restrictive, many of which Warden of Healing is not. But it's also another thing Warden isn't; not . It's that little detail, that difference in little right-hand symbol and coloring, that makes Dunedain Remedy one of the greatest healing cards in the game; it may not provide as much healing as Warden, but it provides that healing to those long left out.

AlasForCeleborn 323
In our 4 players mono-sphere Fellowship we used this card to great effect in the middle-late game, with all the non Lore decks having quite a bit of resources laying around and taking out some pressure from the Warden(s). Sometimes the Remedy was passed around like ten times at the end of the combat phase, cleaning out all the damage on heroes. The presence of Elrond at the table also made this card (but also any healing card) definitely better. — Alonewolf87 732 10/16/20
1

I've been playing with this card a few times now, and not only is it super fun to use, I think it becomes an auto-include in mono Leadership decks (for solo)! I will try it soon, that's for sure!!!!!!!!!!!

Lecitadin 163
Can't wait for my &quot;Drowned Ruins&quot; pack to come in some I can slot this into my Dunedain deck. This pretty well rounds out the three things Dunedain most require 1.)good defense, 2.)shadow effect management, and 3.)Healing/damage control — MDuckworth83 2390 9/21/16