"But for long years we healers have only sought to patch the rents made by the men of swords." Return of the King
Paulo Puggioni 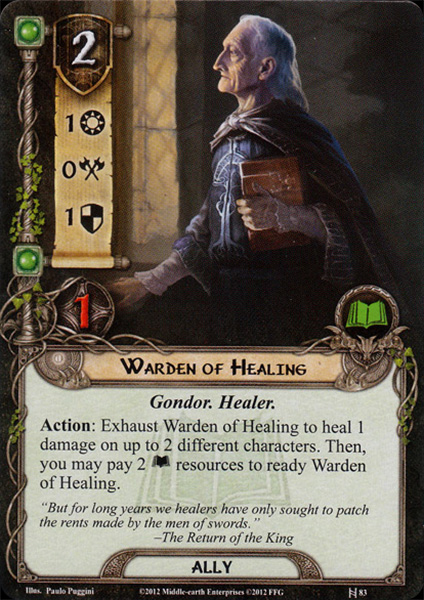 The Warden of Healing has been from his release to this day the gold standard of healing in this game, against which all other healing options are inevitably compared, and for a long time it was also pretty much the only game in town healing-wise. The monopoly is gone but the significance remains.

At the time the Warden of Healing was released, there were a few other options for healing, but none of them especially good. Beorn's Hospitality is pretty terrible; Lore of Imladris had the issue that full heals aren't that great unless you have characters with larger hit point pools than we generally do, and in the long run will heal less than the same cost Warden; one pack after the Warden Healing Herbs were better since they cost nothing but the card slot in the deck and a hero action, but retained the full heal problem; Glorfindel is too expensive and takes up a hero slot; leaving Self Preservation and Daughter of the Nimrodel. Now these two were more reasonable. Self Preservation has the advantage of being generally more durable - there being far fewer effects in the game which discard attachments than which kill allies - but is less flexible since it only goes on one character. The big contrast though is between the Daughter and the Warden, one healing 2 damage from a single hero while the other heals 1 damage each from 2 different characters. The character/hero distinction gives the Warden the edge in some cases regardless, but it could have been a more interesting decision between the two, debating whether you wanted your healing more focused or more widespread. What scuppered this potentially interesting decision was the fact the Warden only costs 2 resources to the Daughter's 3, making him the clearly superior choice.

All healing effects that aren't full heals will of course benefit from having Elrond on the table, but the spread out healing of the Warden benefits extra since Elrond can trigger separately on each separate instance of healing.

The general advantages of the Warden are obvious. He's fairly inexpensive, provides flexible healing wherever you may need it, and is repeatable. In all but the most damage-heavy quests, a couple of Wardens of Healing will generally be enough to keep an entire board-state healthy all game and then some. On top of that there's the ability to ready the Warden after healing so he can heal some more. Of course for the same cost of readying one Warden you could just play another, but that depends on you drawing another, so if you urgently need more healing and can't wait for your card draw (the one potential disadvantage of the Warden being less concentrated healing) the ability to spend a couple of resources and use the Warden again. If you have more resources you can keep doing this over and over again, with the ultimate case being the Glóin+Song of Wisdom/Narvi's Belt+Elrond+Warden of Healing combo, where with Elrond you can heal 2 damage from Glóin for every 2 resources you spend readying the Warden, for a 1-to-1 resource-to-healing conversion, allowing for basically infinite healing as Glóin gains the resources to heal himself by taking the damage which needs to be healed.

If there's not damage on the board and you really need more questing power, you could use the Warden's 1 , which could be boosted by Visionary Leadership, but I'd only do that if you relly need the extra , because there's always potential for damage to happen unexpectedly.

As I noted, the Warden was basically uncontested as far as healing options went for a long time. More recently though, he's not a much the only reasonable choice, though he's probably still the most widely applicable. Lembas is cheaper, more focused, and has the added bonus of readying but is a one-shot; The Long Defeat works well with side-quests but less well without them and is again a one-shot; Galadhrim Healer is technically a one-shot but given the ability to bounce Silvan allies in and out of play doesn't have to be; Dúnedain Remedy though it becomes expensive in the long run and only works for heroes is the first instance of healing outside the sphere; but the real contenders to my mind are Imladris Caregiver and Ioreth. The Caregiver can heal as much as the Warden each round if you have the cards to discard and has even more flexibility, on top of which he doesn't have to exhaust and the discard thing synergises with the mechanics of Noldor decks, making him potentially a better choice in that context; while Ioreth again becomes expensive in the long run but is free initially and mostly corners the market in more focused healing. Both have the advantage of not seeming as much of a waste if you don't consistently have damage to heal, where a Warden on a damage-free board may be offering you nothing for the two resources you spent.

Seeing how Galadhrim Healer and Imladris Caregiver specifically synergise with their respective traits, I highly doubt we'll ever go back to something generic like Warden of Healing, especially since the Warden's consistent and generically available healing had such an impact on the metagame by forming his long-standing monopoly. As I said, the Warden is no longer the only game in town. He's still kind of the default assumption for healing though, with other choices only possibly being better under certain specific circumstances. If you want healing in a deck, Warden of Healing is the first card you should look at, only considering other possibilities if they specifically suit the specific deck or you want even more healing after first adding Wardens.

Warden of Arnor 5207
I used this card before in an all-Lore deck for a two-header solo. I centered the build on Lore Damrod and Trap cards. Because Damrod lowers the cost of my traps, and I used low cost allies, all 3 Lore heroes had extra resources every round. Minimized engagements with maximized healing from these Wardens, was more than enough to push most campaigns. That's until I started scenarios with more locations and treacheries. — milo.alejo 18 9/18/17