Response: After Aragorn commits to a quest, spend 1 resource from his resource pool to ready him.

"I am Aragorn son of Arathorn; and if by life or death I can save you, I will."
The Fellowship of the Ring
John Stanko 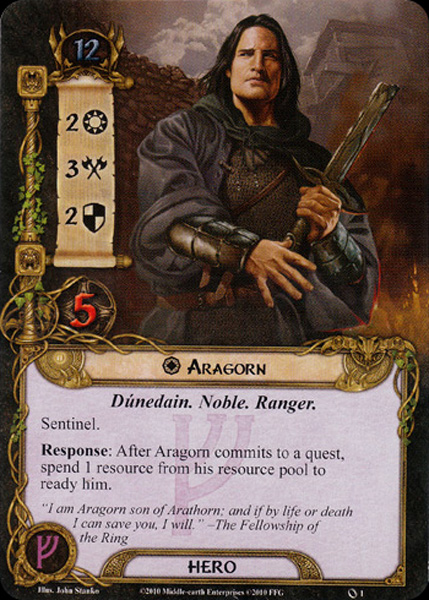 Oh, core-set Aragorn, how can I compare you?! Let me count the ways:

He was clearly a star in the core set (remember back in the day when the only other readying was that single copy of Unexpected Courage?!), but how does he fair now with 69 other non-Bilbo/Fellowship heroes available?! I'd say fairly well. He's still an all-around solid choice for the primary hero in your lineup, whether you run mono-sphere, or use him to gain access to the all around goodness that comes with just a little bit of access to the leadership sphere. And while his ability isn't as amazing as it was when the core set first came out, as there are definitely cheaper readying effects then paying one resource per round, being able to almost guarantee that you can use him at least twice per round is pretty good. His problem is that he's not as specialized as many heroes, so if you want a dedicated quester, defender, or even attacker, you could do better somewhere else. All that said, he still has a place in many a deck.

So, let's start our comparisons to see why core-set Aragorn hasn't been completely replaced in either the game or our hearts. Now, 12 starting threat is pretty high. In fact, only Treebeard, Gandalf, and Elrond have a higher starting threat. For that matter, only 6 non-Aragorn heroes have 12 starting threat. So, is that a problem? I don't think so, as there are so many ways to combat the risk. First, there are quite a few good low threat-cost heroes to combine him with, so by no means does his inclusion guarantee a high starting threat. Also, with all the threat reduction out there these days, and with the age old tricks of slapping Celebrían's Stone or a Song of Travel to some access to some Spirit and splash in some of those cards. So, clearly, 12 starting threat is not a deal-braker.

Okay, moving on to stats. 3 attack and 5 hit points is great. It makes him great at putting the hurt on the many, many baddies that populate our beloved Middle-Earth and it makes him a great target for undefended and direct damage. However, as he is clearly designed to quest and block, given his ability and the sentinel keyword, it seems strange that his will-power and defense are only 2 each. I guess that while the Son of Arathorn is supposed to be awesome, they didn't want to make him too awesome, especially in the core set. And this is were those tough design decisions come in. He needed to be good without being hero Gandalf. So we can't have everything. But that's okay. He's a jack of all trades, which I think suits him well.

Now, a word about the sentinel keyword. This keyword is, of course, meaningless in solo games, but being able to help another player defend against enemy attacks in multiplayer is pretty clutch, unless everyone has a good defender ready all the time. And even then, there are always those nasty shadow cards that say things like "The attacking enemy makes and additional attack after this one," or the dreaded "After this attack, the attacking enemy engages the next player and makes an immediate attack!" We've all had games in which someone has lost a hero because of an unexpected attack. Of course, as far as good defensive sentinel heroes go, he doesn't compare to the likes of Beregond, but then that's not what Aragorn is suppose to be, either. He's not a dedicated tank, he's about versatility. If you need a dedicated sentinel defender, go with someone else.

Of course, this incarnation of Aragorn has a neat, though admittedly costly, readying ability. "Response: After Aragorn commits to a quest, spend 1 resource from his resource pool to ready him." Let's look deeper into this ability. First, you can easily spend quite a few resources during the course of a game readying the Dunedan. But in Leadership, with access to it's myriad ways of generating extra resources, this isn't the worst thing. This is doubly true now that we have extra Heroes who can donate coins to him through Arwen Undómiel and Denethor. However, you have to decide whether to use his readying ability before the staging step, which means that often you won't know whether you need an extra defender handy. This is in comparison to the sons of Elrond, Elladan and Elrohir, who have similar restrictions on using their abilities(i.e. that you have to choose to pay 1 resource when the defense/attack is declared), but somehow this never seems to be as much of a problem when using the brothers. So, his ability, while good, is limited. Also, I'd be remise if I didn't mention Spirit Glorfindel, who only needs a single attachment to pretty much blow Aragorn out of the water. I understand that a lot of people don't use the Noldor primarily for that reason, so if you fall into that camp, then there is nothing to worry about.

So, the final question we have to ask ourselves is if the other 2 versions of Aragorn have hindered the originals popularity. I would say that the answer is yes. Both Lore Aragorn and Tactics Aragorn have unique abilities that really make them shine in very different decks than the original King of Gondor. I don't think they've replaced him fully, but the designers of the game have definitely given core-set Aragorn a run for his money. But this is as it should be. Some options are good, more options are better, in my book. The different incarnations of our favorite Ranger really do a good job of bringing the different roles that he played in the books and I wouldn't have it any other way. However, this means that I don't play the original as often, as I often give preference to the tactics version in my decks. That said, this doesn't at all make the original a dud. It just means that he doesn't get as much play in my games anymore.

Well, now that we've talked about the merits and drawbacks of the would be King of Gondor, I must say that his star doesn't shine as bright as it once did. If you are looking at a hero that is super good at anyone thing, then Aragorn is probably not your guy. However, if you want a sentinel character that's an all-around good at everything hero, who isn't Gandalf, who doesn't require attachments to be useful twice per round, and you don't mind the high threat, you can't get do much better than the likes of Aragorn.

AVeryGoodTale 163
Also, Lead-agorn is the only version with the Noble trait...so if you are gonna be giving him resources, and if you time it right, Heir of Mardil can ready him a 3rd time. — theredeagle 83 5/18/16
That's an interesting idea. It would only work in certain deckbuilds, but yeah, that woul changes perspective on how much Aragorn can do. Of course, it's probably easier to just put an Unexpected Courage on him, but if you've got a build where you are regularly passing him a coin anyway, it might as well be during the combat phase. — AVeryGoodTale 163 5/18/16
3

Core set Aragorn is a solid hero, versatile, able to perform 2 action per round (when you have enough resources), with quite good stats. His threat is little bit too high and the ability is not so focused and that's usually the reason why I have doubts to put him in the deck. Sometimes it works, sometimes don't. However still one of the better heroes in the core set. I also like the artwork. Verdict: 4/5

Leadership Aragorn is a very versatile character, allowing you to ready him for 1 resource each round. Throughout the game this is going to get expensive so you are better to find some other way of readying him at some point but in the early game it is extremely powerful to be able to quest with him and ready for combat. With his 3 , you really want to be attacking with Aragorn but his high hit points and sentinel ability, mean that he makes a decent emergency defender when needed.

I think the key to using this early version of Aragorn is to design the deck around him. I don't usually like wasted stats and tend to pick heroes that have a dedicated role but once Aragorn has his toys, he is pretty formidable and can do all things well. Celebrían's Stone enables him to quest for 4 and gives him a icon to be able to pay for some very useful and powerful cards, such as Unexpected Courage for extra readying, A Test of Will and Hasty Stroke. For this reason, he's a great candidate for Steward of Gondor and any other resource generating cards you might use. He's in sphere with Sword that was Broken to provide a significant boost to and even gives the humble Snowbourn Scout new purpose. Also in sphere are Steed of the North and Roheryn together allow Aragorn to engage an enemy and immediately attack it. The latter also gives him a icon so he can gain access to even more combat boosting cards, though he has in-sphere access to Dúnedain Mark and in-traitaccess to Gondorian Fire. Alternatively, you can make use of him as a capable defender with the group by slapping an Armored Destrier on him and boosting his with Dúnedain Warning, [Blood of Númenor] (/card/05013)

The introduction of Thorongil makes for some interesting strategies as you could start off with core Aragorn for his readying ability and then bring in one of his other versions depending on the scenario. Aragorn is a great choice in most situations.

With his innate readying ability, he is also a great choice for a two-hero deck as you'll be able to have a hero ready for combat even if Strider takes its time coming out of your deck and with his 5 you can potentially afford to take an undefended attack or two and then heal him up with the in-sphere Dúnedain Remedy or the in-trait Athelas. Arwen Undómiel's ability and the synergy between dunedain and noldor makes her a great partner but the same could be said for Sam Gamgee or Glorfindel or either version of eowyn.

His attachments granting him additional spheres make him excellent in an Elfhelm deck too.

All in all, this early version of Aragorn still stands the test of time and if anything has improved as the card pool has expanded.

Good old Aragorn. Got to love this guy. Core set staple character. He's expensive but you are getting what you pay for here. Artwork is awesome too. Not too many people can hold a broken sword and not look dumb. 4/5 stars.