Lower the cost to play Weapon and Armor attachments on Beregond by 2.

"It is over-late to send for aid when you are already besiged." The Return of the King
Magali Villeneuve 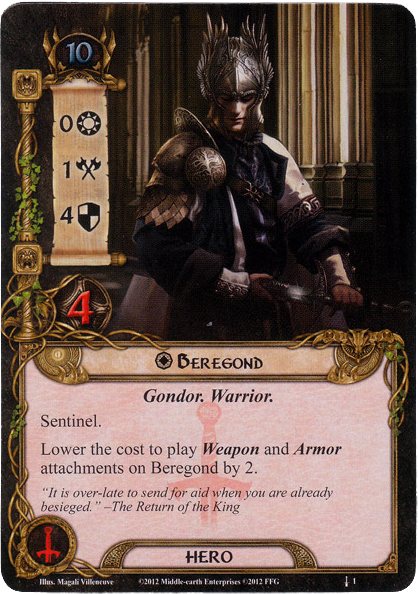 Beregond, a stalwart Soldier of Gondor makes a minor splash in the grand scheme of things in regards to the plot of the novels. As a card though, you would think he defended against the might of Mordor singlehandedly or with very few men. And you can't be blamed for thinking that either. Without any extra shenanigans Beregond has the highest defense for a Hero in the game and has one of the best abilities printed on a card. For the cost of free attachments like Gondorian Shield, Spear of the Citadel, Raven-winged Helm and many others can just fall into his lap, making him an even better defender almost instantly.

What can you do with Beregond's extra resources since he's too good to pay for his weapons and armor? Spend them on cards like Blood of Númenor if you want to take his defense over the edge.

What I like most about Beregond, aside from his power level, is his ease of use. Like outlands, Beregond is a way for new players to learn the game while having a significant amount of strength despite what quest they may be playing. No matter what card game a new player is used to, they can easily subtract 2 from all of their weapon and armor attachments and, aside from the restricted ruling, figure out that they can just plop attachments all over Beregond. If their threat gets too high and they have to face an enemy sooner than they would like then they have an amazing defender to cut them some slack. If a more experienced player is taking on the brunt of enemies then the new player has a chance to learn about the Sentinel keyword and its value.

He's just a great card. You won't be doing anything but defending with him, unless you want to be cute and play around with his other meager stats, and he's extremely easy to learn, pilot, and build around when it comes to the deckbuilding aspect of this game as well. One of the best Heroes in the game, in my opinion.

SecondhandTook 533
Just wanted to chime in that I think your points on Beregond are extremely relevant, especially now that he's in the Defenders of Gondor starter deck — Jreilly89 252 5/1/22