Action: Exhaust Denethor to look at the top card of the encounter deck. You may move that card to the bottom of the deck.

"And the lord Denethor is unlike other men: he sees far."
Beregond, The Return of the King
Tiziano Baracchi 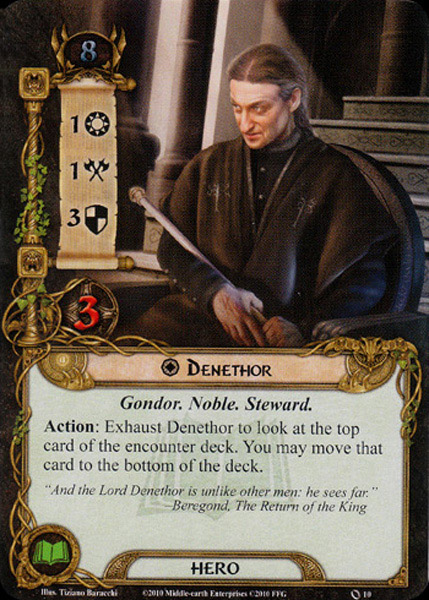 I really like Lore Denethor. He's my favorite core set hero and I still use a lot today. he is mainly overshadowed by Leadership Denethor, who works in most decks. In solo, becomes even more powerful, is a very good defender, and has access to a burning brand. Denethor is very underrated and I highly recommend him.

Wandalf the Gizzard 1989
In the Lore he is described as a great Ruler, as a steward could be, wise and just. He studied the law of Gondor but also had access to a Palantir !! By using it he got a lot of info about the enemy such as Saruman and Saurun but with the side efect to get older as more he used it . That is how the scrying efect is so Thematic with him ! Exceellent work! — Mercyful 1 8/1/20
6

It took me a while to understood how great Denethor really is. His and are useless, but as defender, he shines. His ability is game changing mainly in solo play and with Unexpected Courage and Henamarth Riversong combo, he actually gives you control of Encounter deck, which is the strongest ability, you can have in this game. Forget Eleanor, when Denethor is on the table, no treachery card even reach the game. Very good artwork. Verdict: 5/5.

matrosh 445
Pro Tip: The moving of the encounter card to the bottom of the deck is optional. The usual approach is to use the optional component on scary cards and surge cards. But not all surge cards are equal, some only fire conditionally. For conditional surges (ex. If X then do Y. If X failed to do anything then this card gains surge), only put the card on thr v — Nystrum 29 11/29/21
Got cut off there … the bottom of the deck if it actually surges. If it fails to surge then moving it to the bottom of the deck means it will reappear sooner than if it was simply discarded. The sooner it is seen again, the sooner it might cause pain (because the conditional surge might fire next time). — Nystrum 29 11/29/21
I’ll explain that better/clearer. Barring something like Unexpected Courage, Denethor can only avoid 1 encounter card per round. In the case of Denethor scrying a conditional surge that will surge, the card itself will do nothing but the card after will appear regardless. In that situation, avoiding the conditional surge card won’t help the board state, it will actually cause the conditional surge card to reappear sooner (since the cards at the bottom of the encounter deck will be reached before the discarded cards). — Nystrum 29 11/29/21
Denethor &gt; Eleanor, it is true. But since his ability is an action (rather than a response), he can’t do anything about terrible encounter cards revealed during setup. Eleanor can use her response for treachery cards revealed during setup. — Nystrum 29 12/11/21