While you are engaged with at least 1 enemy, Amarthiúl gains the resource icon.

While you are engaged with at least 2 enemies, add 1 additional resource to Amarthiúl's resource pool when you collect resources during the resource phase.

"The heirs of Elendil do not forget all things past..."
Aragorn, The Return of the King
Tomasz Jedruszek

The Battle of Carn Dûm #115. Leadership. 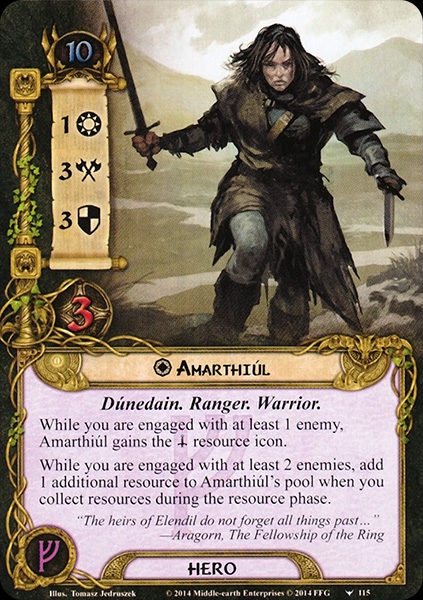 When creating an archtype, FFG often developes a hero whose abilities kickstart the new style of play. Some of these heros, such as Dain Ironfoot for Dwarves, Brand Son of Bain for Dale, or Celeborn for Silvans, provide a global benefit either through stats or in some other form. Others, such as Herluin the Fair for Outlands, Thranduil for Silvans, or Kahliel for Harad, function more as board state accelerators. Amarthuil falls firmly into the latter category.

The three heros mentioned above all have the ability to ignore spheres of influence while playing allies. This is essential for those archtypes, so much so that two of the three dont even have a secondary ability. If Amarthuil is supposed to fulfill a similar role for the Dunedain, how well does he do his job?  First of all, Amarthuil will only gain the tactics trait, and only when engaged with an enemy. This clearly makes him both less efficient and less valuable than his counterparts in other archtypes. This does not mean that he is bad, but he is more limited. The bad side is that he can not bring Lore or Spirit allies, such as Sarn Ford Sentry or Warden of Annuminas, into a traditional Tactics-Leadership Dunedain deck. On the other hand, if you're running a Leadership-Lore or Leadership-Spirit deck, that lowly Tactics icon is amazing. Something that is often overlooked is that he is not restricted to only allies. Those resources on Amarthuil can be used to bring in Followed, Outmatched, or Feint, in addition to any Dunedain Tactics allies. The ability to bring those cards into a Dunedain deck can work wonders.

As a sphere-smoothing hero, Amarthuil can definetaly be a bit average, though he has the added benefit of not being restricted to ally cards. However, it would be unfair to the trusty Ranger to ignore his other ability. Both Herluin and Thranduil have only one ability, which is reflected in their starting threat levels. Kahliel has a secondary ability, which defines the Harad archtype in some respects, but Amarthuil has an ability that directly augments his first one.  The weakness of the first three heros is that they have no way of accelerating their resources. Here Steward of Gondor makes its appearance, but if you're like me and tire of putting it in every deck, or another player is using it, then an alternative means of resource production is always welcomed. Amarthuil generates his own extra resource, ensuring that his Tactics icon will never be wasted. A hero that can sustain himself without dependance on drawing the right card is incredibly valuable.

Finally, it's important to note that the biggest weakness of Amarthuil is that both his abilities are conditional, the first on engaging one enemy, and the second on engaging two. Though this makes him trickier, I would not say this is a negative quality. To begin with, his stats directly offset the penalty of being engaged. With three defense he can defend attacks of small to medium strength, which is perfect for Dunedain. Secondly, in order for Dunedain to function really well, enemies have to be engaged. This means that by kicking off Amarthuil's abilities, you'll be kicking off a host of other Dunedain benefits. So not a bad deal at all. And you'll trigger his second ability fairly consistently, as the Denedian strive to be engaged with at least two enemies for most of the game.

In conclusion, I think that Amarthuil definetaly has a lot of value to bring to the table. He is not perhaps the best choice for a Tactics-Leadership deck, but in Leadership-Lore or Leadership-Spirit he can really make things hum.