Guardian of Arnor gets +1 for each enemy engaged with you.

"Travellers scowl at us, and countrymen give us scornful names."
Aragorn, The Fellowship of the Ring
Adam Lane

The Battle of Carn Dûm #116. Leadership. 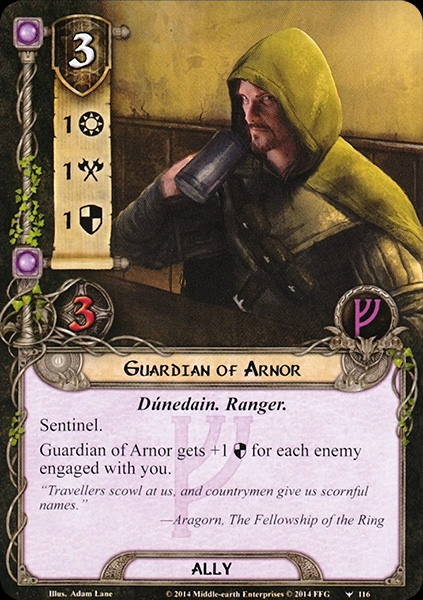 The Guardian of Arnor is, in my opinion, the lynchpin of the Dunedain archtype. The Dunedain deck functions through keeping at least two enemies engaged as often as possible. The benefits include things such as reduced cost of cards, extra resources, extra actions, more attack value, etc. etc. However, the challenge of the Dunedain lies in keeping enough enemies engaged while having enough allies to quest, defend two or more enemies, and preferably kill one enemy every turn. Now this can by all means be done with a deck other than the Dunedain, but while using Dunedain the challenge becomes significantly harder. The danger of the Dunedain does not lie in a new enemy being revealed every round, but in several being revealed at once. This can happen through a variety of ways, and when it does you're in trouble. Because you already have several enemies engaged, you now have at least four to deal with. And it is almost garunteed that a few have 4, 5, or 6 attack value. In a deck without Guardian of Arnor, the ceiling of most cards is 3 defense, maybe 4, and 2 or 3 hit points. An attack of 5 will porbably kill a defender, which in this situation is fatal. In addition, several others will also take damage, meaning their days are numbered. At this point, the next turn seems likely to end in ignominy, as it is unlikely that you have enough combat power to kill more than one big enemy, and your trusty soldiers will be destroyed next combat phase. However, when the Gaurdian of Arnor is in play, this dilemma becomes a piece of cake. Lets say 2 of them are on the board. Both their defense would jump to 5. This ensures that any heavy attackers will deal little to no damage, leaving the gaurdians free to defend again with a similar value the next turn. The beauty of the Guardian of Arnor is that he can handle almost any situation. Lets stick to the theory of keeping two enemies engaged at all times. These enemies will most likely have an attack of 2 or 3 at the most. The Guardian along with almost anyone else will handle these with ease. In an ideal world, the next turn will bring you an enemy of 4 or 5 attack. Now with three enemies engaged, the Guardian's defense rises to 4. Once again, the Guardian and two others can easily handle this. Now with more than three enemies, as in the first example given, it usually becomes necessary to field at least two of the Guardians. But once the are out, they will stick with you through thick and thin.