Action: While Déorwine is defending, spend 1 resource to cancel a shadow effect dealt to the attacking enemy. Any player may trigger this action.

Temple of the Deceived #60. Tactics. 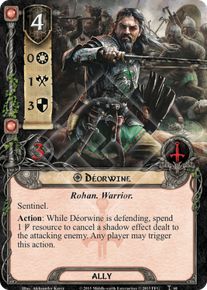 First off, am I the only person who's annoyed that Deorwine's shadow cancellation is an Action whereas every other shadow cancelling card in the game is a Response? Hasty Stroke is, Erkenbrand is and is also more weirdly worded, A Burning Brand is (hey, one card from each sphere), but Deorwine, for some reason, isn't. Does he even, strictly speaking, work, then? Do you have the action window to cancel the shadow card, or does Deorwine's text box basically just read "Sentinel?"

Assuming that Deorwine does work properly, aside from the annoyance at the inconsistency, Deorwine is an amazing ally. 4 isn't cheap, but you're getting your money's worth, especially if Santa decides that you deserve a present (cost reduction) for being good this year. Deorwine is clearly a defensive ally from his stat spread, and his text box further emphasizes this with sentinel (a keyword I personally think underutilized in the game) and an action that allows you to cancel shadow effects during attacks Deorwine's defending. However, this shadow cancellation comes at a cost, in the form of having to spend a resource.

On a whole, the Dream-chaser cycle's theme of cards that have abilities that require spending resources from different spheres are a mixed bag; Arrows from the Trees is almost unplayable just due to how restrictive it is, Hold the Line is pretty bad, while Heed the Dream is the best event in the game if you can pay the 3 . Personally, I find that Deorwine leans more towards the stronger end of the spectrum as far as the multi-sphere cards go, especially because of the fact that any player can spend the resource to trigger his ability. So, while you can include for Steward of Gondor so you can drop Deorwine faster and trigger his ability yourself or engage 2 enemies allowing Amarthiúl to do the same, you can also go mono- and let a partner deck focus on paying for the ability.

But should you put all that effort into triggering his ability? Yes, 100%. Unlimited Hasty Strokes while you're defending with a character with Denethor's bulk is nothing to sneeze at, as it makes it so that, so long as your group has a resource kicking around when Deorwine defends, you can block an enemy with 5 or less and not care what shadow it gets. No +X , no additional attacks, no surprisingly annoying "exhaust a character," just turn Deorwine 90 degrees sideways and do the math. This isn't the most useful in Dream-chaser due to the usually weak shadows, but in other cycles and especially Saga it can prove lifesaving. Ringwraith engages the questing deck and makes an immediate attack? No thank you. Discard Deorwine from play due to Sudden Pitfall? No, you mean cancel Sudden Pitfall due to Deorwine. Deorwine's power only increases the worse shadows get.

However, Deorwine is also able to get his power increased using two of my favorite cards from Dream-chaser: Narya and Raiment of War. I could wax lyrical about Narya all day, but Deorwine is one of the best examples of its power, turning from an okay defending ally with in-built shadow cancellation to a 4 wall that can help counter-attack in a pinch or defend twice without having to worry about shadows if you have the resources. With a kicking around (a sphere that, coincidentally, Narya provides its bearer) and Narya's boosts, Deorwine can defend an enemy with 6 and live, and do it again and again if you have healing. There are literally 28 enemies in the game with high-enough printed to get around this. Raiment of War, on the other hand, only gives you one use out of Deorwine, but that one use is strong enough to survive the printed of all but 2 enemies in the game. Combine these two cards together and you turn Deorwine into a beast, able to defend twice for 5 and 5 or defend once and counter-attack for a respectable 3 . And any defenses you make still have his built-in Hasty Stroke.

Deorwine is not for every deck. He's expensive, and he requires a fair bit of support to reach his full potential. But if you provide him with that support, you'll find a gem of a card, one who provides you with peace of mind during the defending portion of the combat phase.

AlasForCeleborn 510
His action does work because it triggers while Deorwine is defending. It can trigger at any point in the attack. — Swordthatwasbroke 614 7/29/20
You have action windows both after declaring a defender (but before revealing the shadow card) and after revealing the shadow card (but before determining combat damage). — Archol 103 8/23/20
So you can cancel both a unrevealed shadow card and a shadow card that adds &lt;span class=&quot;icon-attack&quot;&gt;&lt;/span&gt; but not a shadow that immediatly changes board state. — Archol 103 8/23/20
3

A really good defensive ally, especially in big fellowships where spare Leadership resources can be easy to get a hold to. It can be further empowered by using Raiment of War, Squire's Helm or Round Shield and can benefit of Théoden discount to be even more cost-efficient. Also amazing artwork and a personal favorite.

Alonewolf87 1620
would make a great Motk hero, because then more defensive options would open up. 3/3 is not great for defending, but his shadow cancelling effect will save him a lot!!!! lots of love for this card — BlackArrow 250 7/17/22
specially with inner strength. has sentinel from the start and then can defend 2 (sentinel) attacks with shadowcancelling and defense4 that is very good, but is the -2 startingthread worth not taking spiritberegond? — doomguard 1422 7/18/22