Guarded (location). Attach to a hero. Response: When attached hero is dealt any amount of damage, reduce that damage by 1.

It was of silver-steel which the Elves call mithril, and with it went a belt of pearls and crystals.
-The Hobbit
Sebastian Zakrzewski 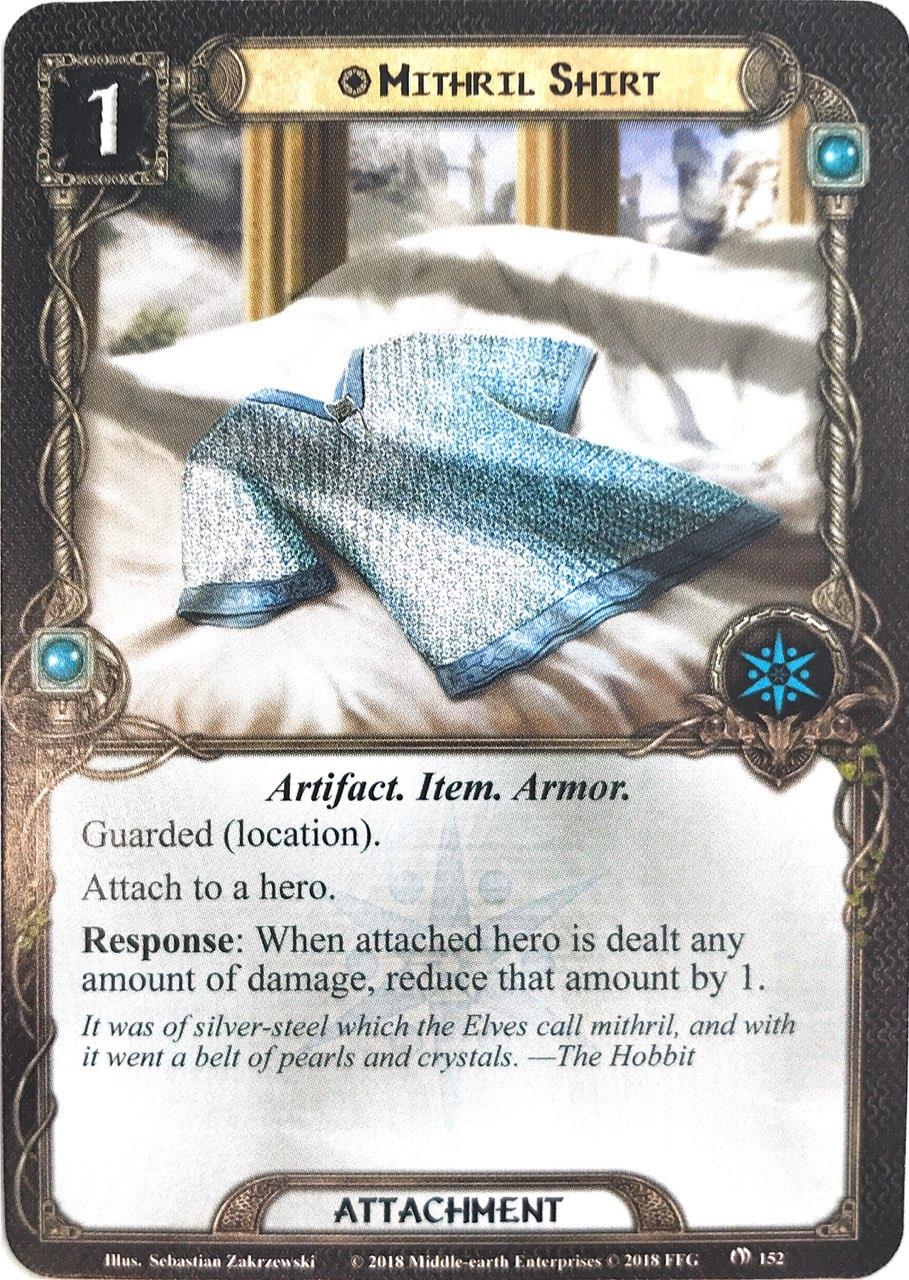 i 've been playing the Weather Hills for the last few days, and i can chime in on its usefulness. the last game i counted how many times its effect was triggered: six times, not including combat. that kind of utility is amazing. just what Spirit needs. so whenever i go into an archery quest or a heavy direct damage quest like the Weather Hills, and i'm questing with Spirit, then the Mithril Shirt will be a go-to for its utility.

Another very good Guarded attachment, one we can always know the kind of card it will be guarded by which let us plan how to deal with it. And since Spirit has basically the most tools to clean locations it can often be trivial to clear it. It can also act as a very good cleanser of the encounter deck when we know there a lot of nasty enemies/treacheries left inside. Almost always worth it and that's besides strange shenanigans involving Vigilant Guard and those "one damage to each character" treacheries.

Alonewolf87 1506
Could Mithril Shirt work with Hero Treebeard? His ability reads &quot;Take 1 damage to...&quot; Would the damage be a cost that the shirt would prevent from being paid? — Jelius 90 6/26/19
It was already clarified with Erkendbrand that if an ability has a cost in damage to activate that damage cannot be redirected or prevented, otherwise the ability does not activate. You can still heal it afterwards though. — Alonewolf87 1506 6/27/19
It brings me great joy to imagine a Mithril shirt that fits Treebeard though — Christian_Medic 793 6/28/19
My vision was a manga-style kaiju fighting mecha-Treebeard. Don't let your dreams be dreams, as they say. — Jelius 90 6/29/19
Yes! That is Mecha-Treebeard! He will save feudal Japan! Or middle earth whatever he doesn't discriminate. — Christian_Medic 793 6/30/19
Mithril Shirt plus Vigilant Guard. Someone please tell me that combo isn't as OP as I think it is. — AlasForCeleborn 438 7/5/19
Could you cancel all archery damage with this and Vigilant guard? — Beowulf_Cadmus 1 7/5/19
Yes right now Mithril Shirt and Vigilant Guard basically let you ignore all Archery Damage, but Caleb has already said that this was an overlooked interaction and it will be adressed soon, perhaps by making Vigilant Guard limited in use. — Alonewolf87 1506 7/15/19
This is an example where I think LotR would benefit from a Restricted list. Vigilant Guard isn't overpowered, Mithril Shirt I'm more on the fence about, but it's only together that they're that OP. If there were a Restricted list, so that Mithril Shirt and Vigilant Guard can't go on the same character, that would prevent the need for an errata, I'd say. But, if an errata is needed, please don't be Vigilant Guard that gets hit with the hammer, a limit on frequency for it would prevent one of its best uses, making damage spread treacheries a joke. Wait a minute... — AlasForCeleborn 438 7/17/19
An easy fix would be to treat archery damage as happening simultaneously, and then to treat Vigilant Guard's responses as happening simultaneously. The end result is that you can redirect as much of it as you want, but still only get to cancel 1. — ellipticaltable 175 7/18/19
I don't think Mithril Shirt's combo with those like Vigilant Guard or Treebeard is OP,because they are combos, only Mithril Shirt is alomost the worst guarded attachment, if something is bad but a little bit OP in combo, I think is ok. — 死锁 270 7/18/19
2

An excellent attachment that can be cleared pretty quick if you have some location clearing effects in play. It goes on any hero other than Beorn with no restrictions and thematically works best on in-spirit Frodo who can always soak damage into threat but now can take one less every time. Also good on sentinels, multi-readying heroes like Boromir and softer HP Hobbit allies to help keep them alive.