Response: When another character would be assigned any amount of damage, place 1 of that damage on attached character instead. 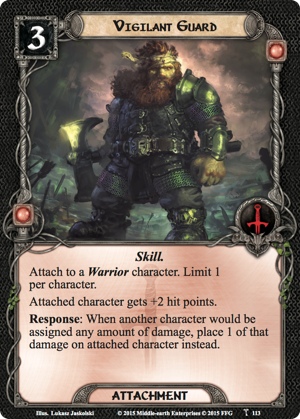 Rules question: Can Vigilant Guard intercept damage that would be intercepted by another copy of Vigilant Guard? Is placing damage the same as assigning damage? That's how I've been playing it, and man is it good then. One copy alone on Gimli pretty much makes damage spreading treacheries a non-threat, and getting a second on another hero allows you to fairly effectively damage-bend (ala air-bending).

Edit: Okay, leaving aside the rules question (which has been answered), Vigilant Guard is an incredible attachment. At 3 cost, it is a bit expensive, but what you get is worth its weight in gold. First off, the boost is nothing to sneeze at, especially for the hero this attachment is seemingly made for, Gimli. While healing may seem to make this sort of boosting unnecessary, in reality they can coexist quite effectively, the boosts allowing you to survive more damage so you can either delay healing until it's most effective or simply ignore the damage you take and heal your friends.

But you don't play Vigilant Guard just for plus 2 ; if you wanted 2 extra , why not just run the cards so you can include Ent Draught? No, the reason you include Vigilant Guard is because of the response. And, WOW, this response is a lot better than you'd think. West Road Traveller is an example of one of 's weaknesses; it has 2 , but only 1 , so any damage it takes means you just wasted 2 resources and lost 2 . This makes treacheries that deal 1 damage to each exhausted or each questing character a big problem. Vigilant Guard basically looks at those treacheries and laughs in their faces. So long as you have healing in play and you're not playing something like Journey to Rhosgobel where 2 direct damage to each target is the norm, your 1 characters basically cannot die. It gets even crazier as you add in more copies of Vigilant Guard, character A intercepting 1 damage from character B and 1 damage from character C who took that damage by using Vigilant Guard to intercept 1 damage from character B, until eventually you've discovered the fifth element from Avatar and become a damage-bender. And all this is ignoring any combat uses Vigilant Guard has; shadow card says "deal 1 damage to defending character who is inevitably at that moment Defender of Rammas?" No, I think it says, "Deal 1 damage to Gimli who you've obviously attached this to." Denethor would take that last point of damage while defending against the Hill Troll, killing him? Vigilant Guard to the rescue, except the player's stuck engaged with the Hill Troll. Generic wear and tear starting to wear your defenders down? Save them from further depreciation with the power of FlexTape Vigilant Guard!

Overall, Vigilant Guard is a fairly simple card; it provides a straight-up boost, and allows you to intercept one damage per source of damage. Like the best simple ideas, though, in practice Vigilant Guard is both widely applicable and incredibly powerful. The ability to save an ally or hero from death is nothing to sneeze at, and, so long as you have the healing to support it, Vigilant Guard is going to be a card your fellowship is never going to be sad to see hit the table.

(Also, until they errata it, Mithril Shirt plus this is literally the most broken combo in the entire game. Play 4 player, have everyone get 3 copies of Vigilant Guard out, suddenly you can go defenderless against the Host of Angmar and take no damage.)

AlasForCeleborn 525
The response is optional (&quot;response&quot; vs &quot;forced&quot;), so just pick which one you want to take the damage. (or both, if there was 2+ damage assigned) — ellipticaltable 183 6/19/19