Reduce the cost to play Scroll of Isildur by 1 for each hero you control with a printed resource icon.

Action: Discard Scroll of Isildur to play any event card in your discard pile as if it were in your hand. Then, place that event on the bottom of your deck. 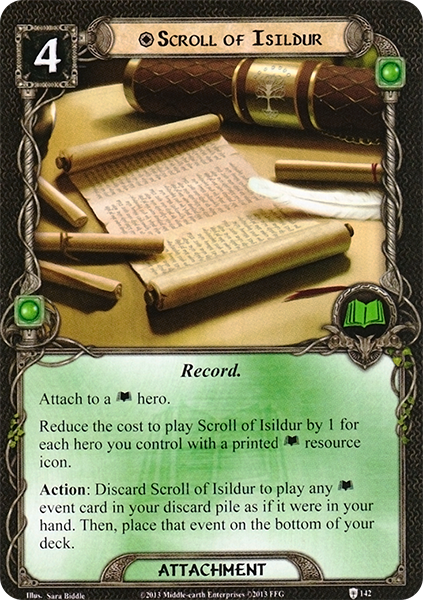 So the Scroll of Isildur in . Mono- to me tends to be much more a multiplayer thing, 3-4 players rather than 1-2, though there are exceptions. Certainly I've made great situational use of the ability to recycle Advance Warning, when paired with a Dúnhere deck, and a similar principle could apply to Haldir of Lórien, Great Yew Bow or Forth Eorlingas! For more widespread use though, I'd say the obvious options are to mess with the encounter deck/staging area and draw cards. For the former, the ability to recycle Secret Paths or Radagast's Cunning can add some security to questing, as can The Evening Star, while repeat use of Gildor's Counsel just makes it easier and if you can afford it (possibly with Secrecy), recurring Out of the Wild to pull all of the encounter deck's teeth is a potent option to have. On the card draw side, a mono- deck can run itself incredibly fast with multiple uses of Daeron's Runes, Mithrandir's Advice, and even Peace, and Thought, but it can also help someone else or everyone by bringing back Heed the Dream or Deep Knowledge. I think those cover all the main options, but some of the other events, much like Advance Warning, can be incredibly powerful if used and reused in the right context. I'll just add as one last point that of course you can also return the Scroll to your hand after use with an Erebor Hammersmith if you want to recycle more events. None of the options are quite the same level of big bomb effect as the global readying events in , but used right they can smooth out your game no end, making the Scroll an incredibly potent option which it's hard to pass up if you're playing a mono- deck.

Warden of Arnor 5219
When you are using this card do you also have to pay for the card you are pulling from the discard pile? — Mad Morderan 117 6/15/19
of course! you play the card &quot;as if it were in your hand&quot;, so you have to pay its cost. — Marcelf 1327 6/17/19
Ok good, that clears it up. Still a fantastic card for mono lore. Thanks. — Mad Morderan 117 6/29/19
With Mono-Lore you presumably have a ton of draw which makes the following combo reliable: Scroll -&gt; Bartering -&gt; Resourceful. That can give a coin each round for just a coin (a mini steward). Use Swordthain instead if you have plenty of unique allies. — LEGOlas 107 4/14/22