Play during the Quest phase, before characters are committed to the Quest.

Action: Reveal 1 less card from the encounter deck this phase. (To a minimum of 1.)

"The wide world is all about you: you can fence yourselves in, but you cannot for ever fence it out."
Gildor, The Fellowship of the Ring
Magali Villeneuve 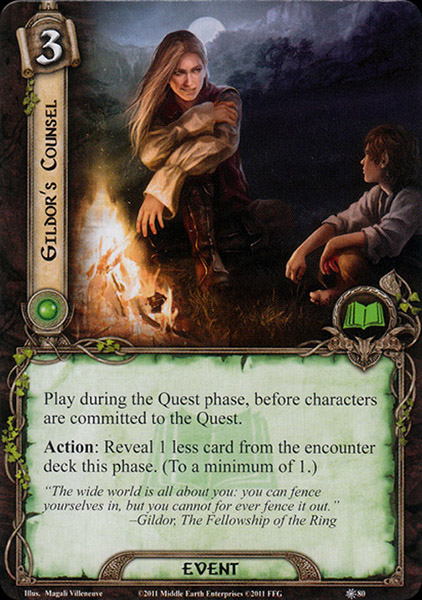 This is a really good card which I think is somewhat underused and underappreciated, including by me. There are I think three main reasons why:

Consider, in this game, the number of cards revealed in staging each round is equal to the number of players in the game. Ergo, in order to be pulling their weight and at least maintaining parity with the encounter deck, each player deck should be in one way or another dealing with the consequences of one encounter card reveal. Of course there are complications thrown into this by any quest effects producing additional cards and whatever cards were already there in setup, but by and large it holds true as a general principle - one deck should be able to deal with one card every round. And in this light it makes perfect sense that Gildor's Counsel costs the exact number of resources most decks will generate each round, because this is in fact the most direct way for a deck to deal with its one card for the round - at the cost of the full round's worth of resources, it simply deals with that card by not revealing it in the first place. And of course that's just the resources - whatever boardstate that deck has in play can still contribute and allow that deck to handle more than its one card for the round.

And that's all there realy is to say about it. Gildor's Counsel isn't a flashy card - as noted, it doesn't directly do anything, and it's a bit on the costly side. But it is logically, mathematically, worth that cost, and as such I would say that if your deck can reasonably afford to play it, you should probably at least think about putting it in.

Warden of Arnor 5207
And you really actually ARE advancing you're board state. You can still commit characters to the quest and not have to worry about &quot;your&quot; encounter card that round. — Wandalf the Gizzard 1989 9/5/17
It's a multiplayer game card that buys time for your pals to get more things going. A stalling technique. If your friends are playing Ents, for example, stalling is very helpful! — Mad Morderan 116 4/27/18
With a lore hobbit thos can be reduced to 1 with a good Meal and when playing Mono Lore it can be recycled with scroll of Isildur. When doing so I really noticed the power level of this card to be very high. — JTG81 71 6/22/18