Spend 1 resource to ready Ceorl. Then, you may give control of Ceorl to another player. Any player may trigger this action. (Limit once per phase).

He drew himself up. Then he knelt, offering his notched sword to the king. "Command me, lord!" he cried.
The Two Towers
Aleksander Karcz

Temple of the Deceived #58. Leadership. 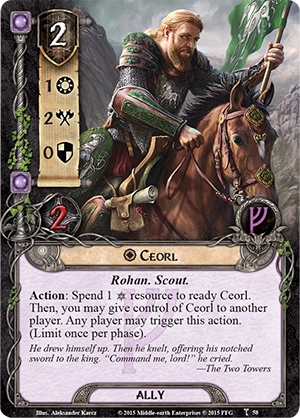 Ceorl is quite possibly one of the best allies from the Dream-chaser cycle. Sure, against Veteran Sword-elf, Master Ironsmith, and Soldier of Dol Amroth that's not much competition, but I'd say he can stand his ground even against the likes of Marksman of Lórien (which is actually really really OP, hashtag change my mind) and Glorfindel.

First off, the most important thing about Ceorl; he's cheap. 2 is pretty much nothing, and while 1 isn't stellar, it is serviceable, and his 2 cost for 2 is a ratio often restricted to allies, while his 2 means he won't die to a stray damage like Silverlode Archer. Ignoring his text box, Ceorl is already a solid one-of in pretty much any deck.

When you take his text box into account, Ceorl really starts showing his quality. Spending 1 is arguably a bit expensive, especially if you want to consistently ready Ceorl, but there is one major mitigating factor: Ceorl is , just like the best card in the game, meaning that you can slap Steward of Gondor on a hero, turn it 90 degrees sideways, and ready Ceorl pretty much constantly.

And you want to know who one of the best targets for Steward of Gondor is? Círdan the Shipwright, because of his potential to go dual-sphere with Narya- Wait a minute, that's and together right there. Ceorl is a fantastic target for Narya, being able to, if you play your cards right, be declared as an attacker, ready with Narya, have 3 for the first attack due to the timing window, hit another enemy for 3 , then ready with a resource to hit another thing for 3. That's three attacks with as much base as Legolas for 12 starting threat, 2 resources, 1 , two , and whatever it cost you to ready Círdan. The ability to pass Ceorl to other players isn't to be forgotten either, giving them either 2 extra , an emergency chump who won't be killed by "Deal 1 damage to the defending character," or even just an extra body for the likes of Sailing or Hide tests.

All in all, Ceorl is a great ally without his text box, providing with cheap , and with his text box he can be a real workhorse, questing while still being able to attack, potentially multiple times. Add in Narya for more and Faramir for and Ceorl can quickly turn from just another unique ally into a superhero.

A good ratio of cost-to-attack for Leadership, but also surprisingly useful and versatile ally if you have a few Spirit resources lying around. It can quest, then be readied and passed around during the quest phase (to avoid some "deal damage to exhausted characters" treacheries) or the encounter phase, then be used by one player to attack, readied again and used by a second player for a second attack or an emergency chumpl block. A pseudo sentinel+ranged for 1 resource is quite good and its versatility to always be whenever it's most needed makes it a very good inclusion in big Fellowships.