Response: After Westfold Horse-breeder enters play, search the top 10 cards of your deck for a Mount attachment and add it to your hand. Shuffle your deck.

"They love their horses next to their kin." Boromir, The Fellowship of the Ring
Mike Capprotti

The Voice of Isengard #7. Spirit. 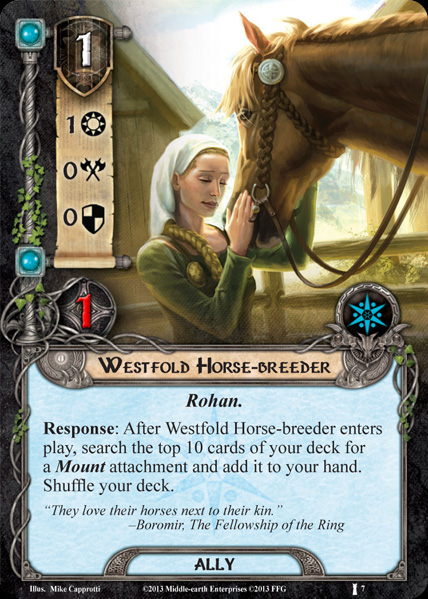 Not a card you would think of as being very notable, but ends up being useful in a lot of decks. You never actually build around the mount trait unless using Elfhelm, but often have a couple in your deck that play a key role - think Armored Destrier + Beregond, Asfaloth + Glorfindel etc. Because they're usually unique and/or restricted, and many of them are meant for specific heroes, running three-ofs isn't very palatable either. Westfold Horse-Breeder is a good, noncommittal way to boost your chances of finding that mount, assuming you have access to the blue moneydollars. It also acts as a deck thinner if it hits. A one-for-one willpower ally/chump isn't bad anyway, so it's not a big deal if you miss. Also benefits from some powerful Rohan effects (Théoden, Ride to Ruin, Helm! Helm!...)

In short, consider using if you have a hero and a high-impact mount.