Response: After Son of Arnor enters play, choose an enemy card in the staging area or currently engaged with another player. Engage that enemy.

...and the North-realm they made in Arnor, and the South-realm in Gondor above the mouths of Anduin.
The Fellowship of the Ring
Ryan Barger 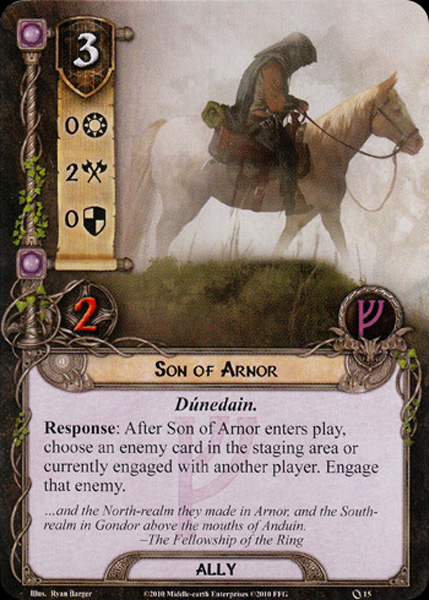 Don't underestimate Son of Arnor! Many people think that he's way too overpriced (and he probably is, at least before Dunedain decks became a thing), but he can be super useful. I've never seen anyone mentioning one of his most clever/powerful uses: if you put him into play via Stand and Fight or Sneak Attack right after resolving enemy attacks, you'll be able to engage a tough enemy that was still sitting in the staging area and it won't be able to attack you this round, but you'll be able to attack him immediately.

warlock000 1064
That's indeed a good combo for this ally. With a bigger card pool you have some other allies like Mablung or Lore Faramir which might be even better at it. Tactics Aragorn does the same thing too every time it destroys an enemy. — Alonewolf87 1561 5/11/20
6

Bad in solo, pretty bad in 2-player games, somewhat decent in 3-4-player games (at least in some constellations); underwhelming Trap/Dunedain synergy; niche (but quite good) uses in some quests.

I feel that Son of Arnor is not a particularly well liked card by the community, and also that this is not entirely without reason.

Son of Arnor is overpriced for his 2 2 2 stats alone and his ability is often not powerful enough to justify the increased price. On top of that the ability is neither very easy to make good use of nor universally helpful.

Synergy with Dunedain or (mostly) Trap trait cards is also often pretty underwhelming (enemies in traps tend to often not pose immediate enough problems that you would need to engage them with any kind of urgency on the other hand the combo with Followed seems to be relatively decent).

I feel that Son of Arnor is not as bad (or even useless) as many people think to seem he is. While his Response is almost always useless in solo and also often at best marginally useful in 2-player games, I think it becomes much better, as the number of players increases.

You see... enemies can occasionally, through engagement checks or encounter deck shenanigans, end up at the wrong side of the table (the wrong player).

While this shouldn't happen too often in 2-player games (as least as long as the player decks are somewhat soundly designed and the players aren't simply crushed by unfortunate setup/turn 1 encounter cards) the unpredictability of the encounter deck increases as the number of players does and so does the chance of one or more enemies landing at the wrong side of the table (especially in enemy-heavy adventures).

If one (or Eru Ilúvatar forbids even more) of these players has a support or pure questing deck that can't handle these enemies properly (from my experience pretty likely in 3-player games, almost assured in 4-player games), you need something to rectify this situation (and pray that aforementioned players can survive before you are able to do so)

Heroes or allies with Ranged or Sentinel are a solution to the problem, cards that let you engage enemies engaged to other players (exactly like this card does) are another one.

If the player with Son of Arnor in his Deck is the player where the enemies are supposed to go (there are a few good Defenders...) aaaaaand they end up somewhere else... Playing Son of Arnor can be a pretty decent option.

While there are better options like for example Aragorn or Westfold Outrider for this case not everyone might have in their deck (or have before mentioned cards in their cardpool).

On top of that there are some fringe (but very nice) uses in quests like The Watcher in the Water, where Son of Arnor allows you to engage enemies you would not otherwise be allowed to. (tbh i can't think of any other quests where this would even be remotely as useful as in Watcher in the Water, but there have to be some, right? ^^)

In short, while i think Son of Arnor is not a brilliant (or even good card) in most cases, there are fringe cases where he can be a decent option (and even fringier ones where he's really good).

I have a feeling that Son of Arnor was designed for core set for one reason only and that's Goblin sniper. And that's also the only reason why I put him into a deck. He is too costy for expendable chump and his stats are not so good. Maybe later, when I'll get more cards for Dunedain, he will be more useful. Artwork is very nice, but it won't change his usefulness. Verdict: 2/5.

Son of Arnor is a bit of a niche card. He really only fits in a dunedain deck. But that ability can help clear out the staging area for questing and two attack is always useful, expensive or not. Synergy with forest snare and archery sink is good as well