Response: After an enemy is revealed from the top of the encounter deck, exhaust Merry to reduce your threat by that enemy's .

"We have come a long way with you and been through some stiff times. We want to go on."
The Fellowship of the Ring
Romana Kendelic

The Wastes of Eriador #1. Spirit. 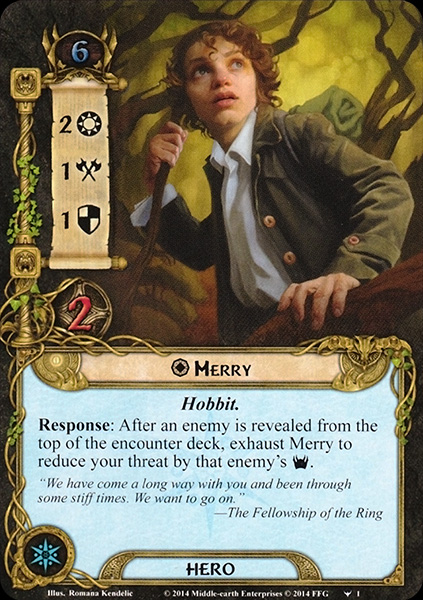 "The world is taming with dangerous foes, now it's my job to go through those corrupted lands and restore some peace."

Merry is clearly my favorite hero in the game so far, why ?

First, he offers one of the most efficient way to reduce your threat during the whole game. As a Secrecy player, I love to add him when I have the opportunity since his threat is so low and he will always help you out for questing. Threat reduction is essential to the game, even for decks not bulding around Secrecy, especially when you want to go in the most difficult scenarios and/or nightmare modes. Merry is certainly not the only hero allowing you to take care of that dangerous threat : Aragorn is able to put you back to your starting value, which can be really powerfull depending on your building, but this is only a one-shot effect (and you have to activate it at the best timing, putting you in difficult positions at times). The recent other hobbit Folco Boffin is a nice way to reduce your threat by 7 at any moment in the game in but then again, you will miss a hero ( Strider would be a possibility). Galadriel is maybe the only hero that allows a constant threat reduction during the game if you equip her with Unexpected Courage. But the threat reduction is not great by itself, it only counters the natural +1 threat at the begining of your turn. The real power of this Galadriel is to draw an additional card each turn. Beregond and Fastred are two interesting options to consider, but they recquire to defend (and survive) the attacks of ennemies, while Merry does it without engaging anyone.

Even better against hard scenarios :

The amount of threat reduction provided by Merry heavely depends on the encounter deck. Scenarios with high threat monsters like The morgul vale are really easy to beat with him since he becomes a power-house and allows you to stay out of sight during the whole game and keep playing cheap Secrecy cards. The number of encounter cards you draw is also key to his success : in many scenarios, cards with surge, or effects that reveal aditional encounter cards each turn like in one of the possible endings of The Steward's fear, make him even better since you have more chances to trigger him. In multiplyer, Merry is a beast, no need to explain obviously.

Merry is not that powerfull if you don't have any way to make him quest when no ennemies are revealed (in solo, that happens quite often). But equip him with Hobbit Pony and he then becomes much more reliable since his 2 willpower will always be usefull. Merry is not a game-changing hero like Elrond and his stats are mediocre in comparison with the mighty Glorfindel : he will only be interesting for questing and threat reduction, which is already nice of course, but not instant win. His power comes with late game since you won't have to engage ennemies, no matter how long the game is. He has the Hobbit trait, which will allow some nice interations with heroes like Pippin for exemple, but he perfectly works out of Hobbit decks. He is manly disigned to be played in any deck that lacks some threat reduction engin. Encounter deck manipulation cards like Denethor or Risk Some Light are also great with him since you will be able to planify what comes next and let Merry avaible to trigger on the best target.

Eventually, Merry also has a beautifull illustration. The yellow background with the shadows of the trees produces nice colorfull tones, and the twisted look of the place reminds us of the corrupted Mikwood. Merry has a dynamic pose, we can imagine he's looking ahead to see if any danger is coming. I like the fact that he's facial expression is ambiguous, we can't really tell if he's afraid or amazed by what he sees. The ambient text is really coherent with the artwork : this Merry is not a fighter like Merry, he's more like a silent scout, looking ahead for trouble and allowing his allies to avoid problems.

A great hero that can easily join any party.

Merry is, in my opinion an under rated card. He keeps your Hobbits within Secrecy and pairs up with his best friends Sam Gamgee and Pippin incredibly well. He also gives you access to spirit within Hobbits which when taking a look at the other options, is something in itself. My favourite use for Merry is giving him a Hobbit Pony, with his trusty steed you can keep him upright within the questing and staging step and wait for enemies to appear to trigger him, if no immediate threats are worth exhausting him, you can commit to the quest at the end of the Staging step with his pony!

Merry also gives you access to the infamous Hobbit Pipe deck, should you choose to pursue that deckbuild. A solid card and a worthy look at in any Hobbit archetype and a fair low threat Hero, who can keep you there, outside of the trait.