Action: Reduce your threat by 1 for each Pipe you control. Each hero with a Pipe attachment gets +1 until the end of the phase.

...he smoked and blew smoke-rings with the same vigour and delight...The Fellowship of the Ring
Lane Brown 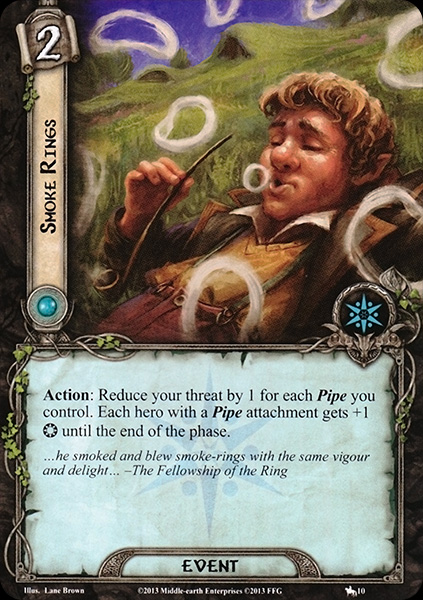 Smoke Rings is a card which is difficult to make good use of, and thus has often been derided as a result. The biggest problem with it to my mind is that it was very difficult to make it work when it actually released. It got much better with the release of The Road Darkens and ally Bilbo, not to mention hero Gandalf and Wizard Pipe. But I'm getting ahead of myself.

So let's compare this to other comparable cards - The Galadhrim's Greeting and Elrond's Counsel. In terms of pure threat reduction, you're almost certainly getting a worse deal than Greeting, though it is 1 resource cheaper. It is possible to get 6 pipes if multiple players co-operate on it, but I'd say that's not overly likely. On the other hand, you are getting a boost as well. So now let's compare to Elrond's Counsel. It'll take some build-up to get to reducing by 3, but that's definitely more attainable than the 6 for Greeting. As to the , as soon as you get 2 Pipes you're getting more. The other aspect though is that it costs 2 more resources. That said, 'quest insurance' as some people refer to it, the ability to correct your in the action window between staging and quest resolution, is super valuable, so it may be more worth it than you might realise. It's still a bit lacklustre at first sight, you have to really be built around getting your Pipes out.

So let's get into this. Smoke Rings keys off Pipe attachments, of which there are two in the game right now: Hobbit Pipe and Wizard Pipe. The problem with Smoke Rings on release was you only had the Hobbit Pipe, and you ideally want more than one pipe before playing Smoke Rings, which when you can only have 3 copies of the Pipe in your deck is going to be wildly inconsistent. Adding another Pipe attachment, plus an ally who can fetch a Pipe anywhere in your deck makes it way more consistent. You still want some good other card draw, but fortunately the Hobbit Pipes themselves will help with that, as will hero Gandalf. As such, I think the best place for this card (certainly the only place I've made it work consistently) is in a Gandalf/Hobbit combination deck such as this one: ringsdb.com

One should note of course that the boost only applies to heroes with pipes attached, though the threat reduction counts pipes attached to allies as well.

So as I realise that I start too many sentences and paragraphs with the word "so," in summary, this card definitely is better than it's generally given credit for, but it's also still a rather difficult one to use, thus I think it's always going to be kind of niche unless we get more Pipe attachments for it to work with.

Looks silly, but can be ridiculous if you get time to set up. My smoking deck has finished games with 0 threat and all cards drawn. Since there's only two pipes in the game thus far (Hobbit Pipe, Wizard Pipe,) Smoke Rings will pretty much only work in one kind of deck. At a minimum you'll want hero Gandalf, at least one Wizard Pipe, a couple of hobbit heroes, 3x Bilbo Baggins, and 3x Hobbit Pipe. Get 4 pipes out and each copy of Smoke Rings becomes "pay 2 for -4 threat and 3 cards." Cycle it with something like Galadhrim Weaver, and you can trigger it 6+ times per game, which gets increasingly easy as you draw through your whole damn deck. Coupled with Expert Treasure-hunter (a natural inclusion for hero Gandalf,) I've actually discovered the problem of not having anything to swap with using Wizard Pipe, so a Will of the West might be in order - though by that point you've probably won anyway.

Gotta love the image of Sauron's minions being unable to find the hobbits because they're obscured by a cloud of tobacco smoke, too.

EDIT: New pipes! Dwarf Pipe, Dúnedain Pipe. Dwarf seems pretty useless, but Dunedain is actually a strong effect on its own and probably warrants some tinkering with this. Wonder why their pipes do different things...