Action: Spend 1 resource from attached hero’s pool to give attached hero +1 until the end of the phase. (Limit 3 times per phase.) 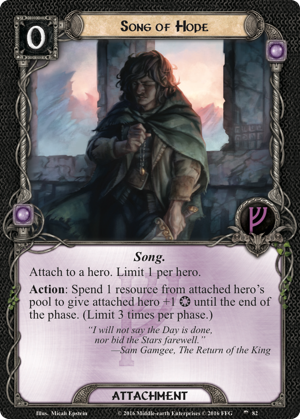 This paired with Steward of Gondor is amazing. If you have a deck with Leadership Denethor and Any Éowyn with the two attachments I mentioned above, (one being SoH) you can give Éowyn resources to still buy stuff, and she can commit 7 each round.

nelloianiro 921
Why not just use Celebrian's Stone rather than using Steward's resources on temporary willpower? — NERD 608 5/12/22
Maybe you're already at your restricted cap (Celebrian's Stone is restricted this is not)? Maybe you did have Celebrian's Stone in the deck alongside this (Celebrian's Stone is unique, this is not)? Maybe you want +3 Willpower and are willing to pay the cost? There are situations where this isn't a bad pick, it's just expensive (Steward makes this less of an issue). — Erathis 1 8/11/22
It's also a Song, which has strong synergy with several other deck types, particularly Hobbits with Fireside Song. — kjeld 462 8/11/22
I would still only play this card in a song deck or with Herugrim/Golden Shield shenanigans. — NERD 608 11/14/22
It's great with MotK Rosie, and can work in some Three Hunters decks which tend to have a bunch of extra resources mid to late game. — kjeld 462 11/14/22