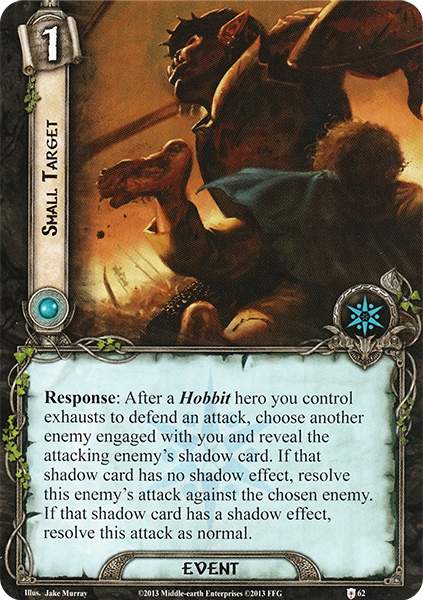 This is a card I singled out for how difficult it is to use it well. To be honest I'd probably pick it out as a card I just didn't like if it weren't such a cool effect, to get the enemies to fight each other. It's really neat if you can do it, but being able to do it is not the most consistent of things.

The important question I have to address then is why it's so difficult to pull this off. The answer comes in 3 parts: Firstly, you need to have two enemies engaged with you, which is less likely if you're playing Hobbits because you'll have fairly low threat (or you need a Hobbit hero with Sentinel defending for someone else, and an enemy engaged with you - more likely but still limited). Secondly you need the first enemy to have a shadow card with no effect, which is obviously entirely possible but not something you can exactly rely on. And thirdly for it to be reasonably effective you need the first enemy to have a decently high and/or the other enemy to have low . That's a lot of things which have to line up just right to get good use out of this card, and they're not things you can do much to influence most of the time.

For the same 1 resource in the sphere you could play Feint and stop the attack entirely. And one of the biggest advantages of using Feint to stop an enemy attacking is that you don't have to exhaust a character to defend. This, if the shadow card has no effect, also effectively stops an attack against you but can only be triggered after you exhaust to defend so you don't get that action advantage. The one thing Small Target has going for it in comparison to Feint is the fact the attack is redirected to another enemy and may deal some damage. So that's alright, 1 resource stops an attack entirely, 1 resource plus exhausting a hero stops an attack and deals damage to another enemy, that seems like a reasonable trade-off. In ideal circumstances it could even stop an attack and kill the other enemy. That would be amazing. But on the other hand it is as I've already covered it's unlikely enough you'll be able to pull this off at all, so those ideal circumstances are even less likely to crop up.

So how can on try to maximise the utility of this card? Well, step one comes from the Voice of Isengard expansion: Silver Lamp. See all the shadow cards before you resolve the attacks, and thus know which ones will work for Small Target and which won't. You could also acquire that knowledge through scrying effects like Risk Some Light, Palantir or Scout Ahead (which would also allow you to rearrange the cards however you wanted). As to being engaged with multiple enemies, Halbarad would work, and his first ability encourages you to keep an enemy around for a while sometimes - on the other hand though, if you're keeping an enemy around to power Halbarad's action advantage you ideally want it to be one with a lower value which makes it less useful for triggering Small Target. Alternatively it could be a matter of carefully choosing what quests to use this strategy for - anything with an enemy (which isn't immune to player card effects) that's considered to be engaged with each player would be an obvious place for this, since they'll be difficult to get rid of but hopefully you can just have them kill off your other enemies (since these are boss enemies we're talking about, they probably have pretty high ). One more alternative hails originally from the very cycle where this card was released, and that is enemies with a damage choke such as the Mumak. Any enemy which can only take a limited amount of damage per round is by necessity going to be sticking around for a few rounds, so why not take the opportunity to drop the Mumak's 7 on some unsuspecting Orc instead of dealing with it yourself that round. Lastly there's the question of how much damage the redirected attack deals. Ideally as I said you want it to get an instant kill, but you can't rely on that, so there may be value in having or pairing up with a deck which has some useful direct damage effects to get you the little bit extra that you need.

And one final point is of course that this is an event, and as such you can't be wholly reliant on it. You get 3 copies, which you may or may not draw in a timely fashion, so you have to have other ways of dealing with enemies planned out. Since you need at least one Hobbit hero to trigger Small Target, Frodo Baggins is an obvious choice. Halbarad I mentioned and he can be an OK defender if necessary. If you're not running Halbarad and instead go for an all-Hobbit approach then Hobbit-sense could work. If you're in Secrecy there's Out of Sight - but I should point out that I've started talking about more events which once again are not so reliable. Frodo's your best bet, but maybe you also want to have some other good defenders in the deck, either heroes or allies, especially since it's possible you'll engage two enemies hoping to trigger Small Target and then find the shadow cards have fallen the wrong way, at which point you need to handle two regular defences.

All-in-all, I basically said it at the start - this card is a really cool effect, but it's difficult to actually make it work. Even following the suggestions I've laid out here it's still not something you can necessarily rely on being able to do consistently. On the other hand, we have to remember that the point of playing a game is to have fun, and the fun factor of this card the times it does work can be easily enough to make up for all the times it doesn't.