While attached hero is ready, shadow cards dealt to enemies engaged with you are dealt face up. (Shadow card effects are still resolved when resolving enemy attacks.)

...one of them uncovered a small lamp that gave out a slender silver beam. The Fellowship of the Ring
Owen William Weber

The Voice of Isengard #9. Spirit. 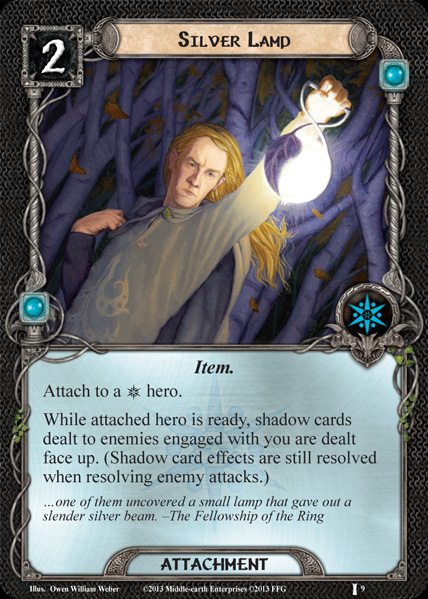 Silver Lamp is a card I really liked the sound of when it was first released, but which I then proceeded to not put in any decks for a long time thereafter. It suffers from the problem scrying cards tend to have (and it is essentially a scrying card, just with a fairly specific focus) in that it gives you knowledge but no means by which to act on that knowledge, so a lot of the time it'll get disregarded in favour of cards which actually let you do things. That being said, on consideration I feel like Silver Lamp has been getting more relevant in the course of the last couple of cycles.

Let's look first at the functionality - it lets you see all shadow cards on enemies engaged with you. But it only does this while the attached hero is ready, and it only attaches to heroes. Those are not irrelevant restrictions - apart from anything else since has a bit of a and questing focus, a lot of heroes would not be expected to be ready in the combat phase as they quested. Additionally, a questing-focused deck isn't so likely to engage that many enemies. So getting the effect to actually work isn't that easy in a lot of decks, and then it isn't particularly useful when you do. No wonder it doesn't see that much play.

However, in decks which are more built to make use of it - decks which can handle combat but still use , or even decks which are actually combat-focused - it becomes very useful. It takes away one of the two random elements which impinge on your decision-making process in the form of shadow cards (the other random element is of course staging). With the Silver Lamp working for you you know exactly what will happen with each attack you take, and therefore you know who can defend what without dying, or indeed what you can take undefended without dying. There's a lot of utility in having that knowledge. On the other hand, a large amount of the time you can make those decisions without needing that knowledge, and you could spend those 2 resources on something else. How much are the shadows really going to mess you up? I mean, it's not like you get that many, presumably.

In the course of those last two paragraphs I've essentially passed by the reasons why Silver Lamp has gained relevance since its release. It's not so useful in questing-focused decks, but then we've been getting more sphere bleed, and has been acquiring more combat power with heroes like Beregond (an excellent target for Silver Lamp). Advance knowledge of shadows is often regarded as not so needed because the shadows generally aren't too worrying, but then I would say shadow effects have been getting a bit worse over these past couple of cycles. Finally I raised the question of how many shadow cards you have to deal with - obviously the more shadows you're getting the more it'll help to know them in advance - and this leads into one of the best contexts for Silver Lamp which is of course a Dunedain deck, following the archetype as established a cycle later than Silver Lamp.

Since Dunedain decks like to engage everything in sight they tend to see a lot of shadow cards on the enemies they aren't killing because they're powering various effects. Of course one can simply use Forest Snares to stop those enemies attacking, but there are limits, and what if you don't have ? Having a Silver Lamp means you know what to defend where, what to chump, what to use a Feint on because the shadow effect will screw you over. Given that a decent Dunedain deck could in some quests end up engaging every enemy that turns up all game, and leaving several of them alive for most of it, that's a lot of shadow cards to not worry about. Unfortunately people have generally disregarded the possibilities in Dunedain, which i a bit of a shame, because Star Brooch, while not amazing, is still useful, and Warden of Annúminas is ridiculous when you can use Heir of Valandil to make him a 0-cost 4 ally. Not to mention free Northern Trackers as well.

The other really great synergy with Silver Lamp is of course anything which cancels or discards shadows. Assuming your defender with A Burning Brand doesn't have enough actions to defend everything, you can use the Lamp to know exactly which attack needs its shadow cancelled. Or you can know exactly which shadow card to discard with Armored Destrier or Gandalf's Staff.

The difficulty with Silver Lamp lies in actually finding the right deck for it, but if you do, the possibilities it can offer are really quite impressive once you take the time to consider them properly.

Warden of Arnor 4508
The greatest of all underused cards. — Lecitadin 158 12/31/16
&quot;engaged with you&quot;: so in a multiplayer/multideck game, only the player who's hero this is attached to gets to look at all shadow cards dealt to his characters, correct? (Although in theory a second Silver lamp could be played on the other player's spirit hero if he/she has one?) — Tomcat84 1 9/1/19
2

This card may not seem very powerful at first, considering the cost of 2 and a requirement of hero. As pointed out by Warden of Arnor, heroes are generally exhausted post quest phase. However this card is totally invaluable when you take some of the existing heroes with Light of Valinor in mind:

Glorfindel anyone?
Arwen Undómiel
Círdan the Shipwright
Legolas
Galadriel (Light of Valinor not even needed as she does not quest and you could exhaust her for card/threat at the end of the round)

All of the above are extremely potent heroes that would make this card shine.

zxql 11
Well I guess the absolute best user would be Spirit Beregond, perhaps after you started with Tactics Beregond, load him up with all his attachments and then switch him with his Spirit counterpart with the newly spoiled Helm of Secrecy event — Alonewolf87 1044 4/26/20
Fastre is another possibility, I even saw an Alep hero who might be a decent spirit defender. — Quetzal513 49 12/12/20