Attach to a Dúnedain hero.

Planning Action: Exhaust Heir of Valandil to reduce the cost of the next Dúnedain ally you play this phase by 1 for each enemy engaged with you.

"But my home, such as I have, is in the North. For here the heirs of Valandil have ever dwelt in long line unbroken from father unto son for many generations." Aragorn, The Fellowship of the Ring
Smirtouille 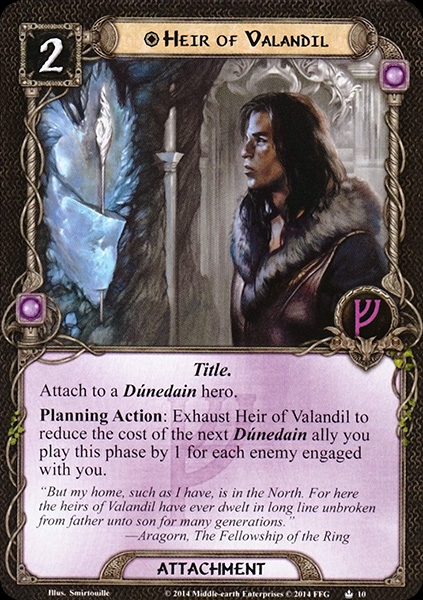 The gold standard for resource acceleration has always been and always will be the Steward of Gondor. In terms of efficiency and effectiveness it just can't be beat. However, most experienced players will agree that one phase in which it is severely lacking is theme. What's the fun of slapping a Gondorian political title on someone like Dáin Ironfoot, who's probably never been to Gondor in his life? Accordingly, game developers have striven to create alternate thematic version of the Steward, and Heir of Valandil lands directly in that category.

Now I won't make this review only a comparison to the Steward, since I believe that it's overpowered and only strictly meant for Gondor swarm decks or the beginning player. That being said, Heir of Valandil has the potential to outperform the Steward, if such a thing is possible. Allow me to elaborate.

The biggest drawback of the Heir is that it's effects are strictly conditional. You must be engaged with at least one enemy for it two work, and its arguably not worth the trouble unless you are engaged with at least two. Of course, then you must be able to deal with the enemies you have engaged on a consistent basis, so this is a double edged sword. If you think about it though, this plays right into the Dunedain archetype in general, which includes a whole host of other abilities that require enemies to be engaged. This means that the resource acceleration provided by the Heir will almost never be the ONLY benefit from engaging enemies. In light of this, it would be unfair to view the card without the lens of the Dunedain archetype. Most Dunedain decks will strive to be engaged with at least two enemies every turn, that way making the most of cards like Amarthiúl, Guardian of Arnor, Fornost Bowman, Sarn Ford Sentry, etc. etc. This gives you two resources per turn, aka synonymous with the Steward. Unlike the Steward, this is the minimal amount of resource acceleration you should be getting per turn. Many Dunedain decks will strive to have up to five enemies engaged at a time. With the Heir, this can net you a Ranger of Cardolan, Warden of Annúminas, or Eldahir for free! Of course their really aren't any Dunedain allies that cost more than four resources, so the upside is capped off there, but in one turn the Heir of Valandil can give you the production of the Steward of Gondor in two!

I'm not trying to say that the Heir of Valandil is a better card then the Steward of Gondor, because in general it is not. However, I do appreciate the thematic way that the developers found a way to replace the Steward in the right decks. And honestly, the Heir of Valandil is much more fun. Nuanced cards in my opinion make the game so much more enjoyable and challenging, and the Heir toes the line perfectly between power and being overpowered, while at the same time taking some skill and ingenuity to run effectively.