Attach to a Dúnedain or Noldor hero. Limit 1 per hero.

While you are engaged with an enemy, attached hero gets +1 and cannot have its reduced.

...each cloak was pinned upon the left shoulder by a brooch of silver shaped like a rayed star. The Return of the King
Alexandr Elichev 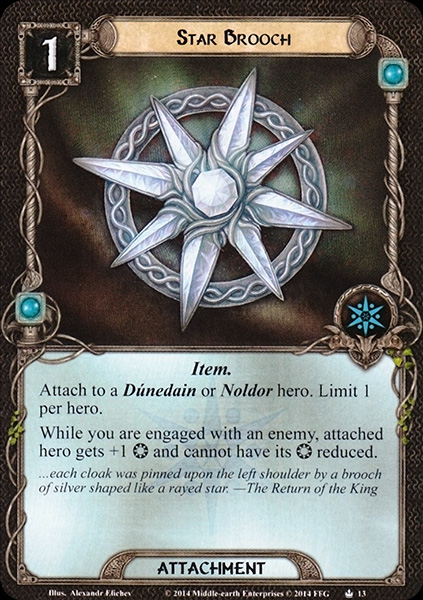 Star Brooch is a card I loved from the moment I first saw it, even though it's reception was pretty cold in the rest of the community (who doesn't seem to initially like cards unless they are OP and can apply to every deck/scenario). My first impression was how the card art, flavor text, and ability perfectly captured the spirit of the Dunedain, the wandering descendents of ancient Numenorean kings. It is steadfast and vigilant, yet concealed in it's power and heritage...which is displayed when engaging the foes of the West.

Thematic win aside, I also really love cards that have conditional value. It's like they are saying "I bring great value for cost, but you need to build a deck around me and find a way to unlock my power". I personally wish that the majority of cards in this game were designed in such a way, as it would make decks more unique and keep deck building fresh and interesting. But enough gushing, let's take a look at the actual mechanics of this card.

A permanent +1 boost is very good value no matter who you are. It out classes cards like The Favor of the Lady and Dúnedain Quest instantly in cost/value, although The Favor of the Lady is less conditional and Dúnedain Quest can be shifted, so those cards are probably more precisely "different but equal". The only card that really outmatches it completely in value is Celebrían's Stone. However, Celebrían's Stone comes with it's own limitations in that it is both unique and restricted, while Star Brooch is neither. Indeed, I think that these two cards are complimentary, and the decks that I build that include Star Brooch also tend to include Celebrían's Stone. The secondary ability definitely more conditional, as I can only think of a handful of scenarios that reduce willpower, but it really just adds more value to the card in highly conditional situations and is really, really nice on the rare occasions it applies!

Clearly, the primary home for Star Brooch is Dunedain decks. The condition of having an enemy engaged is not that restrictive in these decks, since a Dunedain deck really isn't pulling it's weight anyway unless it spends most of the game engaged to atleast 2 enemies. It does take a little bit of crafty building since Dunedain decks tend to be primarily and , and focused more so on combat than quest progression. However, I have discovered that Dunedain decks can also be quite good in the questing role, as long as you are able to keep atleast two enemies engaged and are able to deal with their attacks and shadow effects. Star Brooch pairs well in a deck with Warden of Annúminas, even though it can't directly attach to this ally. I have found that Halbarad is the best target for Star Brooch, as when engaged with enemies he enjoys the ability to quest without exhausting, and it gets crazy when Halbarad is loaded up with Star Brooch and Celebrían's Stone and is questing for 5 every round without exhausting!

Great card, and fun to build a deck around, and very thematic to boot.

MDuckworth83 3127
Stupid question but if I boost willpower temporarily and stay engaged with an enemy, is the willpower boost permanent? — LEGOlas 107 1/25/22
I think not, it shoul only work in the case a card specify &quot;reduce their quest by X&quot; — Samuel San 12 1/26/22
I am now imagining using Protector of Lorien's full willpower boost each round and making it permanent — LEGOlas 107 4/6/22
@LEGO thats not possible. an expiring bonus is not the same as &quot;reduce&quot;. — doomguard 1488 4/7/22
I understand the intent and why that's not allowed, but according my stupidly litteral side, if something &quot;cannot be reduced&quot;, it cannot decrease in value. Thus the bonus could never expire. — LEGOlas 107 4/7/22
the idea ws ood ;) and keep creativity going. sadly in this case, not working. (imaging if, not only the protector of lorien, galadriel with nenya would really hit, permanent bonus +4 every turn stackin... ;) — doomguard 1488 4/7/22
So what happens if you put this on Gilraen? Does she get her Willpower back if you have an enemy engaged with you? — Erathis 1 10/24/22
@Erathis Yes it does! That is a completely intentional combo on the part of the developers! — FolcoBoffin 248 12/11/22