Attach to a Noble hero. 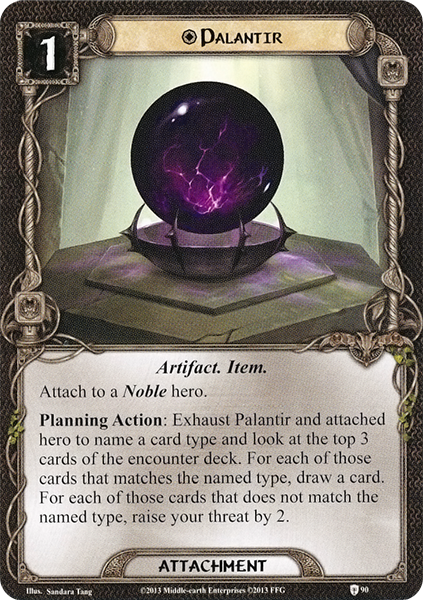 The Palantir was not particularly well-received on release - people felt it was thematic, but not particularly useful (or indeed they felt it was thematic because it wasn't particularly useful). To this day it's a seriously underused and I would say undervalued card. The big reason for this is that it can be a very difficult card to use well. I myself have never made significant use of it, though I've played around with it on occasion when I was trying to extract more hit points from the Ring of Barahir and since I had the stone I figured I may as well use it.

So let's examine the effect. Like the rings of power, the Palantir requires you to exhaust the attached hero in order to use it. This is not inherently a problem, especially now, as the value of hero actions has I would say gone somewhat down over the lifetime of the game. The fact that it's specifically a Planning action rather than just a generic action does hurt it though since it means if you're concerned about how many actions you'll need you can't wait until later in the round when you have a clearer idea of whether you'll lose out by dropping an action to gaze into the Palantir. Practically speaking though, you can definitely build your deck in such a way that you can cope with that loss of hero actions, so the only real deterrent there is the need for specific deckbuilding, which is a theme we'll see continue to come up with this card. Having accepted the cost of use, how about the benefit. Well, we name a card type, look at the next 3 encounter cards and draw a card for each one which matches! Yay! But we raise our threat by 2 for each one which doesn't! Boo! It's easy enough to see why people weren't so keen on this card, but that sort of knee-jerk reaction can easily blind people to the more subtle good qualities of a card. As anyone can tell you who has watched a well-tuned Boromir deck in action, threat raises are not as big a punishment as they used to be - though it is another thing you have to definitely build around. The card draw is so-so - if the encounter deck is around an equal split between locations, enemies and treacheries then you should presumably get 1 card per round on average or a bit better since you can alter your guesses based on what cards you've already seen; but Beravor would get you 2 cards per round guaranteed without any threat risk or the need to draw and play this attachment first, so why should we bother with this dingy Numenorean bauble? The answer lies in the first part of the effect, which to be honest is the real benefit to which the card draw's just a nice bonus and the threat a drawback - you get to look at the top 3 cards of the encounter deck. There are only two other player cards in the game which allow you to scry the encounter deck deeper than 1 card - Scout Ahead eats up your questing for at least one round, while Risk Some Light is expensive unless you're playing Secrecy. On top of which of course neither is generally repeatable (you could use Scroll of Isildur with Risk Some Light but that's introducing additional costs and another card, not to mention pretty much confining it to a mono- deck). The Palantir lets you scry 3 cards deep every single round if you want, and that's what makes it such an incredibly powerful card if you're willing to build a deck around it to make it work.

Thus the big debate comes down to just how useful that scrying is. Some players will tend not to bother with scrying effects, because knowing what's coming doesn't (with the exceptions of Denethor and Risk Some Light) allow you to change it any more than you already could. On the other hand, there are definitely situations where that knowledge is very definitely power. How often in a deck have you gone "Oh, I really want to play [Insert card here], but I need to save a resource for A Test of Will in case there's a bad treachery;" or debated sending a character to the quest because you're not sure if you'll need them for combat? Palantir can solve all these problems so long as you're not playing 4-player or getting messed up by Surge, because you know exactly what your staging will be (and depending on player count, maybe some shadow cards as well). And then we can go even further - sometimes you might question using Eleanor to cancel a treachery because the replacement could be worse, but with the Palantir you can know. The Minas Tirith Lampwright was also very unpopular when he was released because of the inherent element of guesswork in triggering him, but with the Palantir you can know exactly what the Surge will bring. Other possibilities can include knowing what enemy will land on a trap card you play, whether (and how) you'll be triggering Lanwyn, and perhaps one of the most significant is simply knowing exactly how much threat you're about to reveal, allowing you very tight control of how much progress you make with your questing (potentially key to quests like Conflict at the Carrock where you want to turtle on one stage before advancing to the next only when you're ready).

So the Palantir really is a very powerful repeatable scry, with some card draw and/or threat raise attached and costing the action of a hero. Put that way, it doesn't actually sound as difficult to build around than I've been saying it is. Just load up on threat reduction and readying - or put it on a hero whose action you can easily do without. It is restricted to Nobles, but Noble is the most common hero trait in the game so options are fairly plentiful. Eleanor can work alright given her low threat, especially if you have some form of one-shot readying like Cram, because then you just pop the ready when the Palantir shows you something you really want Eleanor to cancel and otherwise don't bother. Éowyn of course effectively starts at 6 threat but you'd lose out on her willpower. Likewise Glorfindel is 5 but again you lose the stats. Boromir obviously lets you bypass the action cost, at the expense of driving your threat up even faster than you already are. While he can't have the Palantir himself as he lacks the Noble trait, a good combo can be with Aragorn since he lets you reset your threat back down after you put it up. This fits particularly well against A Knife in the Dark as it lets you hit Bill Ferny's engagement cost and then reset. Works for any other quest with a comparable enemy as well obviously. And returning to player cards, of course the Palantir can fit in very nicely with a Valour strategy, being one of the few ways the players possess of deliberately raising their threats without raising everyone else's at the same time. Of course if you're going for Valour you'll need some very good threat control to ensure you don't hit 50 but stay above 40. Of course you do have the option of using the Palantir to get yourself into the Valour range and then stopping once you're there, making the threat less of a burden at that point than it otherwise would be given the Palantir has the potential to generate 6 threat every round.

In conclusion, if you appreciate the valuable knowledge gained from a 3-card scry, then don't be so quick to dismiss the Palantir. You need to be prepared for the loss of a hero action and bring plenty of threat reduction (or play Valour and benefit from your high threat), but if you build a deck which can consistently cover those bases, then the reward can be seriously impactful. And on top of that you also get to draw some extra cards! Give it a try, and show the difference between a card which is genuinely bad and a card which just takes a bit of effort to achieve its potential, because Palantir is very much the latter.

Warden of Arnor 5010
I used it a while ago (with Loragorn, I think) and yep, for scrying, it was quite amazing! Your article is making me consider the Palentir again! — Lecitadin 181 8/19/16