Response: After an encounter card with surge is revealed, discard Minas Tirith Lampwright to name enemy, location, or treachery. If the next encounter card revealed is the named type, discard it without resolving its effects. 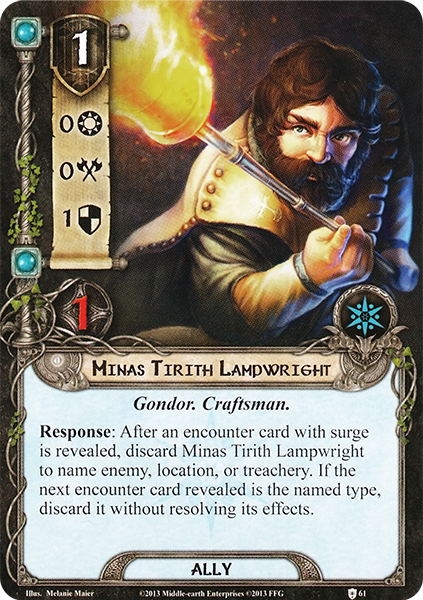 As of this writing, Minas Tirith Lampwright is the only defense we have against the dreaded surge keyword. It was also universally panned upon it's release.

Much of the ire comes from the fact that this card was seen as a gamble, in that your odds of correctly identifying the extra encounter card are roughly 1 in 3; therefore, aside from pulling shenanigans with Henamarth Riversong and Shadow of the Past, or peering into the Palantir, you are probably going to whiff. Worse still is that once you consider the deck space required to ensure a correct guess, you quickly realize that it's just not worth the effort.

I hereby propose that Minas Tirith Lampwright is not a garbage card; rather, we have been looking at him the wrong way. To illustrate, let's look at a couple of scenarios:

I believe that the second scario sums up the intent behind Minas Tirith Lampwright: It is not a flat-out cancellation power card. It is a safety net, for the low cost of 1 resource.

How to use Minas Tirith Lampwright:

Whether or not you believe that Minas Tirith Lampwright is worth the deck space depends on how many players you have, and what quest you are up against. Some quests, like the Battle of Five Armies or To Hunt an Orc, can swarm you unexpectedly quickly (with enemies and locations respectively), especially in multiplayer. A couple of Minas Tirith Lampwrights might come in handy.

I wouldn't throw him in every deck, but maybe one day he'll make for a good story.

I think it's finally time for the Minas Tirith Lampwright to show his quality. Far-sighted is one of the most recent events that might breathe new life into this somewhat forgotten ally by making it more efficient. Playing this event allows you to see what's coming from the top 5 cards of the encounter cards rather easily. The Lampwright will fit perfectly in a Firyal (MotK) deck (I have a Saruman - Firyal (MotK) - Galadriel deck I'm really proud of). You can rarely see any quests without the Surge keyword popping up in the most unfortunate moment, so I'm eager to use his services.