Shadow of the Past

The wizard's face remained grave and attentive, and only a flicker in his deep eyes showed that he was startled and indeed alarmed. 'It has been called that before,' he said, 'but not by you.' The Fellowship of the Ring
Henning Ludvigsen 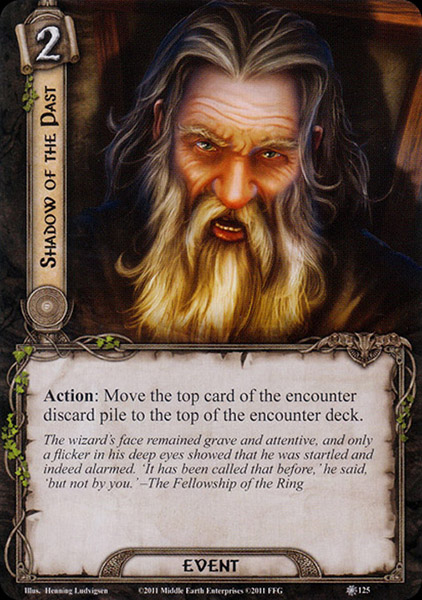 This is an interesting and somewhat variable card. I like it a lot but it's difficult to make it work consistently in a lot of quests. Moving the top card of the discard pile back onto the encounter deck in general merely gives you the advantage of foreknowledge. Which is useful to have, but it's not necessarily worth 2 resources, though at least they are neutral resources so anyone can pay for this card. The best reason to play this card is not just because you want to know in advance what the next encounter card is, but furthermore because it's a card you actually want to see revealed.

So why would you want to see a particular card revealed? Well, obviously because it's a relatively nice card. In some cases it may simply be that it's low threat; or that it's a location when you're getting swarmed by enemies; or an enemy when you're at risk of location lock. Sometimes of course there are even those rare cards which under the right circumstances actually do nothing. There's at least one treachery in the Angmar Awakened cycle which under certain conditions is Doomed 2 and nothing else, and I could certainly see the benefit in recycling that unless you're particularly worried about your threat. Mostly the general, not quest-specific instances of these gentle or nothing cards are from earlier in the life of the game - if you're using Thalin then any 1 HP enemy becomes a dead card, earlier quests had more 1 threat cards which are obviously far preferable to pretty much any other card in the encounter deck, any location with only 2 quest points can be instantly explored by Asfaloth (with Glorfindel) so it has no real impact on the board-state, that sort of thing. More recently, a slightly different one is of course that in a Sailing quest you could return to the top of the encounter deck a card with a wheel on it so you know you only have to commit one character to the next Sailing test. And even now there are a fair number of locations with beneficial effects when they're explored, so there might be a case when you particularly want to trigger one of those effects (Perhaps the most notable being the Seat of Seeing in Breaking of the Fellowship in campaign mode - very helpful in the long run if you can do it). But then there are also a fair number of even more quest-specific cases, which may be the more interesting ones. Certainly they're the cases where Shadow of the Past really comes into its own.

Item one in this category is objectives for victory. Signs of Gollum in Hunt For Gollum; Athelas in Journey to Rhosgobel; Gollum in Dead Marshes if he gets shuffled into the encounter deck and goes as a shadow card; the victory point mountains in Redhorn Gate (while not as effective for winning, the Dimrill Stair is also a decent one because of its positive effect on travelling); a card you can match the starting letter of in Watcher in the Water. Again this was more a thing earlier in the life of the game. But this isn't the really juicy stuff to my mind, this is mostly just insurance against your own shuffling of the encounter deck screwing up your chances of victory. Correcting an issue in the design of the quests where crucial objectives could be lost as shadow cards and force the players to sit around until the whole encounter deck got reshuffled and then try again. I'd inlude Shadow of the Past for a bunch of these quests, but I wouldn't be particularly enthused about playing it.

Item two is the good stuff. Non-essential but very helpful/fun objectives, such as: Grimbeorn the Old in Conflict at the Carrock; Rangers of Ithilien in Massing at Osgiliath; the random bits of equipment in Long Dark and Foundations of Stone; Ithilien Guardians in Into Ithilien; Misty Mountain Eagles in Battle of Five Armies; the Gildor Inglorion boon in Shadow of the Past in campaign mode (and further if you add him to the campaign pool); Tom Bombadil in Old Forest and Fog on the Barrow Downs; and the Dunedain of Annuminas in Siege of Annuminas. All of these can be very helpful to get a hold of, so in my opinion well worth spending two neutral resources to retrieve if they go as shadows. Of note, some of them (Gildor and Bombadil at least, off the top of my head) don't even surge, at which point your 2-cost neutral Shadow of the Past is providing a more powerful effect than the 3-cost Gildor's Counsel. A final note on this front is that using Ranger Summons can allow you to seed your own objectives into the encounter deck, those being Rangers of the North, and so in this case Shadow of the Past would be a bit less quest-specific.

So that as far as I'm concerned is the best and most fun use of Shadow of the Past. Beyond that... well, as I said, there are still other instances where simply having that foreknowledge is useful, cases where a bit of control over the enemy to location ratio could be helpful, and cases where you want a certain card recycled because of the positive effect you get for defeating it. And occasionally even now there can be dead cards. This card can certainly be at least a valid consideration for decks focused on encounter deck manipulation, but in a lot of cases it may be best as a sideboard card to swap in where it'll be particularly useful rather than an all-the-time thing.

I feel like Warden summarized most aspects of this card already, but the only thing I would add is that with the new Burglar's Turn contract or guarded player cards in general when it comes to solo play this is a great way to select what you want to go up against and keep a location stocked when you need one most.

This card is one of the most unique ways to manipulate the encounter deck and so far one of the very few ways to put certain encounter cards back into it, especially ones that you want to draw again (such as helpful locations in some quests).

Christian_Medic 828
I know this is niche, but its amazing against Hummerhorns with Dunhere — LEGOlas 76 2/14/22
I'll add that Shadow of the Past is an excellent way to avoid surging treacheries when playing Mount Doom solo. — ironwill212 163 2/17/22