Ranger of the North

When Revealed: The first player chooses a player to take control of Ranger of the North. Then, either deal 2 damage to an enemy or place 2 progress tokens on a location. 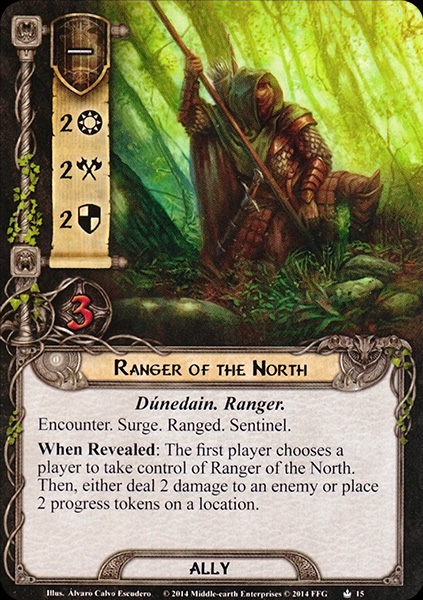 I love the idea, but the execution is lacking. This card should have a shadow effect in order to be useful, something like "Shadow: Resolve the When Revealed effect of this card". Otherwise this is a coaster. You pay a resource to play it and you have no idea whether or not will it come up later on. And when it does come up, it's usually as a shadow card (especially in solo play). You can make an argument that "at least you have no shadow effect during this attack", but I don't think it's enough to warrant putting Ranger of the North in my deck.

warlock000 1879
it makes sense in an surrounding, where more good cards are put in the encounterdeck, and here some possibilitis are there to shuffle the encontrdeck (or play it when its thin) overall, in solo it makes not much sense often you do not come through the whole encounterdeck, but with more player the better it is. i have made a fellowship including all the cards that are put into the encounterdeck, perhaps u found it usefull: https://ringsdb.com/fellowship/view/10777 — doomguard 1488 3/31/21