Response: After an encounter card with surge is revealed, either ready Lanwyn or give her +2 until the end of the phase. (Limit twice per phase.)

"The Men of Dale used to have the trick of understanding their language, and used them for messengers to fly to the Men of the Lake..." Thorin, The Hobbit
Aleksander Karcz 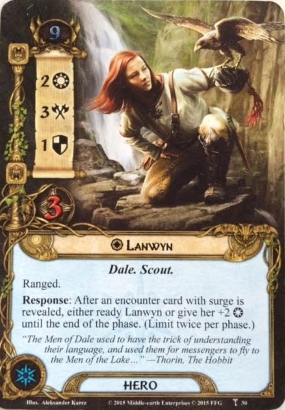 I mean, who wouldn't go for a flaming red haired babe with a falcon?

Lanwyn is a great hero, one of my favorites from the Dream-Chaser cycle. Her response is powerful, especially when combined with scrying shenanigans so you can know a surge is coming. The fact that her ability is twice per phase means that it is sometimes possible to have her questing for 4, and ready! She also is a great pair with Late Adventurer, so that if you didn't commit her to the quest, but reveal a surge, you now have an extra 4. I've used her solo and multiplayer in campaigns, since there are a plethora of surges in those scenarios. One small thing to be careful of: she does only have three hitpoints, which is fine, just something to keep in mind. Opening The Thing in the Depths, I immediately built a deck and tried her out. It took me almost three months to realize, not only does she have great stats and a great ability, SHE HAS RANGED TOO! Another nice thing is she's not overused like, cough, cough, Éowyn. You are unlikely if going to a tournament to see Lanwyn across the table from you! Also her two less common traits can contribute to The Free Peoples. All in all, Lanwyn is a great hero with great stats, keywords, and ability. Kudos to Aleksander Karez for awesome art as always!

A lower-mid threat cost, nice attack, with ranged to boot (only Lanwyn and Legolas have those as Spirit Heroes), and good questing power would be a cool addition, but nothing to write home about. Having the Dale keyword is a nice plus, as is Scout; Brand son of Bain is a specially interesting pair. Her ability is conditional on the quest having surge, as she can't do anything if none of the cards in the encounter deck has that pesky trait... right?

Well, actually you can. With a Tactics companion you can call on the Eagles to either increase the scout's Willpower or giving one extra action; a Leadership pair would help the same, with Ranger instead of the Great Messengers of Manwe.

If you were to try a tri-sphere deck abusing those cards, maybe Thurindir for Scout Ahead would be interesting to get those Surge when you actually need, with other in-sphere cards like Far-sighted or even Risk Some Light. Otherwise, a nice pairing with Aragorn would allow you to keep two spheres while giving you access to Ranger Summons.

I believe she should be used in a Fellowship together with a good defending deck as to abuse her Ranged when possible.

Anyway, I still don't have this card, it'll take a bit until I do, but I'm already interested to see how I can abuse such a fun Hero.