Each Dale character you control with a player attachment gets +1 .

"He is a strong king, and his realm now reaches south and east of Esgaroth."
Glóin, The Fellowship of the Ring
Antonio José Manzanedo

The Wilds of Rhovanion #1. Leadership. 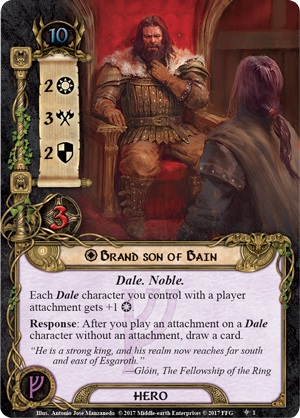 I think we can all agree that Dale as an archetype is quite strong. But why? I actually came up with a reason why, based on a definition I heard for a word;

Dale doesn't have an economy.

Let me explain; the definition of economy I heard was 'the distribution of scarce goods.' Dale doesn't really have 'scarce goods.' Resources? King of Dale, Traffic from Dale, Redwater Sentry and Warrior of Dale's cost reductions and King of Dale and Bard son of Brand's resource smoothing mean that resources are nowhere near as much trouble for Dale as they are for other decks. Cards? Brand's lack of a frequency limit on his response means that the first attachment you play on a Dale character, that you might've just gotten into play for free with King of Dale, replaces itself, making card draw at least a bit less of a hassle than it is for other decks. These two things-resources and cards-that Dale has in abundance are, I believe, part of what makes it so strong as an archetype. To put it simply, Dale can play more cards than most decks, which advances your board state, which makes it easier to win. For example, I calculated a theoretical ideal first turn for a Dale deck.

-Opening hand includes; King of Dale, Redwater Sentry, 2 0-cost attachments that you can put on your King of Dale, Hauberk of Mail, and Traffic from Dale.

First turn (theoretical); Play King of Dale on a Dale hero, drawing a card. Play the 2 0-cost attachments on them. Exhaust King of Dale to get Redwater Sentry into play for free. Play Hauberk of Mail on him for free, and draw a card. Then, if you want to/can, play any other 0-cost attachments you drew on your other heroes, then play Traffic from Dale to net at least 1 resource.

You just played 5 cards, spent at two resources, drew two cards, and saved four resources-and that's without the Traffic from Dale. In total, you just 'used' 6 resources and drew 2 cards-wait a minute, that's one turn's worth of card draw and resources.

Now, Dale does have weaknesses-they might have a draw engine that's at least similar to Legacy of Durin, but they're extremely reliant on drawing the right cards, they don't really have any in-trait healing, their heroes are squishy-but 4 resources worth of discounts and 2 cards on turn 1 is really, really hard to say no to. And King of Dale and Traffic from Dale are only going to get stronger as the game goes on, giving you even more insane cost reduction/resource generation.

Of course, the obvious balancing factor is that the allies Dale turns out are cheap but weak-nope, they're really, really good. Warrior of Dale plus Bow of Yew is arguably 4 Ranged , Redwater Sentry with a Hauberk of Mail is Beregond, North Realm Lookout with any Item doesn't exhaust to quest and is 3 with Brand-that's almost Outlands levels of stats, that are quite easy to get into play for free or less than their printed cost. For example, from the Harad trait from the Haradrim cycle, Yazan was 5 resources for 3 Ranged and a point of direct damage. (Now, Yazan is by no means the best Harad ally, but he's the best example for this.) So, you spend 5 for a semi-usable (from an action standpoint, from a stat standpoint it's workable) 2 , 3 Ranged and a direct damage, and 3 . But for Warrior of Dale, you can spend 2 resources to get King of Dale on a hero, get 2 0-cost attachments on them, exhaust King of Dale, play Warrior of Dale, then play Bow of Yew on him to get 1, 3 Ranged , a point of direct damage (that you can't choose where it hits, I will admit,) and 3 , all for-

-2 resources and 5 cards. Yes, that is as many cards as Peace, and Thought draws you that you need to pull this off, but 2 resources versus 5 /Kahliel resources for very similar stats is downright unfair.

That's the power of the Dale deck; they have a sturdy economy, which allows the rest of the deck functionality to easily flow from there. They might be less non-statistically strong than characters of other traits, but does that really matter when you're barely spending resources but still playing 1-2 cards a turn, questing with multiple characters with 1 less than Éowyn, able to defend better than the 5 cost unique defending ally from last cycle (barring nasty shadow effects), able to destroy most enemies in the game, and still have some supportive capabilities after all that? Sheer cheapness provides an incredible amount of power, especially when combined with above-average card draw. In World War II, the Tiger may have been better than the T-34, but not unbeatably better, and it wasn't as easy to produce; sheer numbers overwhelmed whatever qualitative advantage the Tiger had. The same is true of Dale; North Realm Lookout, even when boosted, doesn't have Firyal's very handy encounter deck manipulation, but it's cheaper, and it's stats are little less. There's also, as a good friend tells me, time and again, the fact that simply having more people to throw at a problem dramatically helps. Churning out allies thanks to all your cost reduction and resource generation gives you extra flexibility when you need it-say, if an enemy makes an additional attack. Dale, to be blunt, gets more people for less than other archetypes. Again, the power of cheapness; cheaper allies means more allies, which means more actions.

So, that's why I think Dale as an archetype is strong, but what about the King of Dale himself? First off, don't run him in a non-Dale deck; he's too focused on making Dale good to provide anything other than his stats in other deck types. Speaking of stats, his are nicely balanced (Another good thing about Dale's heroes; they're flexible. You can quest with them early game, attack with them, even block in a pinch if they have some defensive boosts,) which begs for readying. His threat is mid-to-high, but manageable, especially because his sphere gives you access to the old combo of Sneak Attack plus Gandalf for threat management. His first ability turns Dale characters with an attachment from okay questers to good, or good to great, questers; the difference between 1 and 2, and between 2 and 3, is huge, making his ability very useful. His second ability I would say is downright overpowered, like Legacy of Durin. No frequency limit on a card-replacement engine that rewards you for doing what you should in your deck is, in my opinion, not the best design choice; you're going to have players swinging between drawing no cards and furiously waiting for something that's not an event to come up so they can actually play it, drawing a card to replace the attachment they just played, and drawing a silly amount of cards in one turn due to blind chance. In the context of once per round, however, Brand's ability is fantastic, making it more likely that you'll be able to keep comboing your cards by drawing down your deck.

Those are my thoughts on the King of Dale and the Dale archetype; if you disagree with me, please let me know, I would love to hear your thoughts on this. Until then, have fun playing the son of Bain; getting allies into play for free/cheap, drawing more cards than Erestor, and providing almost as many stats as Outlands.