Response: After Firyal commits to the quest, look at the top card of the encounter deck. Then, you may discard the looked at card. 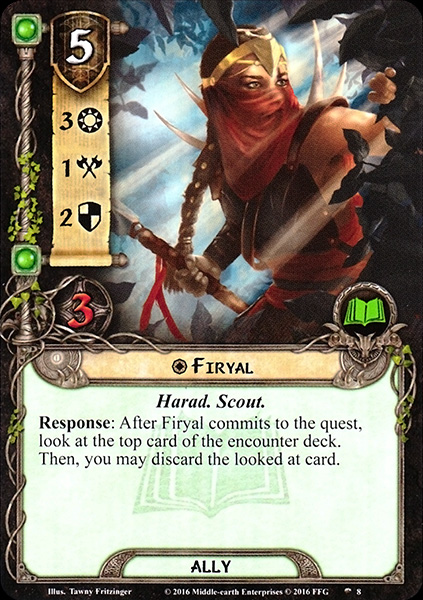 Firyal is the best ally in the game. I will die on this hill.

Perhaps the best way to answer those who disagree with this statement is to ask which other ally has a more powerful effect on the game. Gandalf is of course the go to choice here, and understandably so. His abilities can be game saving and game changing. About to threat out? Play Gandalf. Too many enemies around for healthy living? Gandalf again. And if one is ever in need of an extra surge of willpower to push you over the top, Gandalf will answer the call. The downside? Gandalf is one of those allies who only stick around for one round. As such, he is generally more like an event card and can be hard to compare. However, though she works in a differant way than Gandalf, Firyal can be even more effective. Gandalf is great at taking down an extra difficult enemy, or just knocking one off if there are too many around. But with Firyal, that enemy might never have been in play to begin with. Gandalf can reduce your threat by 5 points at a time, but treachery cards are the main source of threat increase. With Firyal, those Treachery cards will never make it farther than the discard pile. In fact, Firyal operates mainly through prevention. Treachery, enemy, location, and especially encounter side quest, if your're not ready to handle it at the moment, the Haradrim scout will make sure you don't have to. Now, many people have compared her ability to that of the hero Denethor. However, though Denethor can avoid a difficult card, in the end he can only postpone its arrival because it will never leave the encounter deck. Firyal on the other hand will discard it, ensuring that the player will not have to worry about it until the encounter deck is reset. And for those treachery cards that require one to put the top enemy of the discard pile into play, Firyal merely works her magic again. In addition, Denethor must exhaust to trigger his ability, thus costing him an action. Firyal triggers her ability when she commits to a quest, allowing her to put her three willpower to good use. Another ally which many people consider to be the best in the game is the mighty ent, Treebeard. Firyal can prevent much of what Gandalf is so good at remedying, but how does she compare to this statistical monster? For this is precisely what Treebeard is. With four attack and three defense, as well as five hit points, he needs very little help to take down most enemies and as a defender can tank any attack in the game. In addition, he has an inbuilt readying ability which he can trigger every other round, allowing him to be a huge force during combat as well as giving him a good opportunity to contribute with his two willpower. And all of this still leaves out his extremely low cost! For a statline of fourteen points, four resources is cheap. Any other ally in the game would cost at least seven. This is partially balanced by the fact that he enters the game exhausted, but still he remains an absolute steal. And when one plays him in the context of ents, his abilities are magnified even further. How does Firyal compare to this powerhouse of combat energy? First of all, one must consider that each ally's strengths are inherently different. Treebeard focuses on dominating the game statistically in the resource and combat phases. Firyal on the other hand, though she does provide major questing support, ensures through her skrying ability that one will not be overwhelmed by the encounter deck. One must then ask the question, "Which is more important?" The answer is without a doubt the latter. If a card with surge is never revealed, or a nasty treachery card can never reach the table, one might never need Treebeard's readying action, threat out, or lose a hero to damage. In the end, Firyal's preventative ability will do more for you than any amount of Gandalf cards or extra actions ever can.

Swordthatwasbroke 616
No honorable mention for core Faramir? I'm disappointed! — Freeman 3 8/29/19
Firyal's utility varies also a lot depending on if you are playing solo or not, in 4 players she definitely has less value than Faramir for me. — Alonewolf87 1655 8/29/19
You convinced me! She seems amazing. And currently she is running against Treebeard for utility and Gandal OHaUH for sheer boss-hero-factor. I haven't got to Harad yet but looking forward to try her out. — Christian_Medic 869 8/30/19
She looks even better in the new Messenger of the King contract. Having her on the table first round, especially solo, is SO good! — bobbymcbobface 623 4/16/20
One of the strongest motk heroes for sure, probably one of the better lore heroes — dubcity566 30 9/5/20
The BEST ALLY EVER!!!!!!! — GreenWizard 281 2/15/21
I'm presently playing solo with Firyal. Am I to understand you STILL need to draw a card from the Encounter Deck after she chooses to discard? If not, this ally truly IS the best in the game. — Ronaldovigilante 1 7/13/21
Just answered my own question--a powerful ally, in solo. — Ronaldovigilante 1 7/13/21