Response: After Yazan is declared as an attacker, deal 1 damage to a non-unique enemy in play. (Limit once per phase.)

...he and his knights still held themselves like lords in whom the race of Númenor ran true.
The Return of the King
David A. Nash 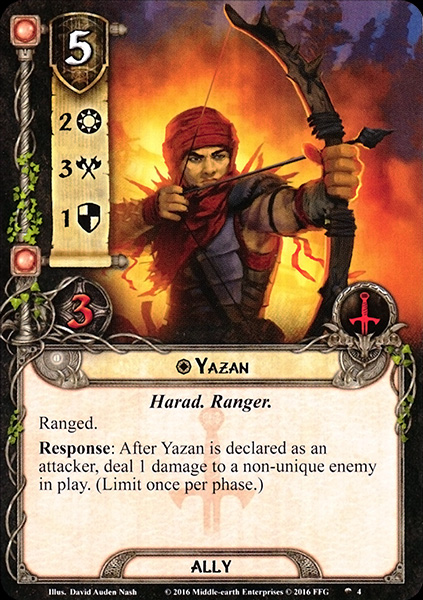 While Yazan is a very expensive Ally card, his special ability is incredible - giving him a bonus Direct Damage sniper attack (limit once per phase) dealing 1 damage on any non-unique enemy regardless of the enemy defense!

Perfect for taking out pesky cards like Goblin Sniper, or putting that last point of damage on a wounded, but heavily armored foe.

Here is a mathematical comparison on how powerful the special ability of Direct Damage can be....

And if you upgrade Yazan to a Hero with the new Messenger of the King card, his abilities rival Middle-Earth's most well-known archer Hero, Legolas.

Let's compare Core set Legolas, with Messenger of the King Hero Yazan. Both are sphere Ranged Heroes with 9 to start.

Questing: Hero (as well as Ally) Yazan has one more than Legolas, at a loss of one health . This gives Yazan some "quest assist" flexibility - and somewhat reduces the gap between Hero Yazan's ability to advance quests, vs. Legolas special ability. Although this flexibility will cost Yazan an action, you can ready Hero Yazan for combat with the usual Hero readiness combos, and you can additionally ready either the Hero or Ally version using Kahliel's special ability. And you can buff Yazan by up to +3 with Kahliel’s Tribesman. This is something Legolas (or just about any other questing hero for that matter) cannot match.

Survivability: Since both heroes would not be used as defenders, Yazan's three health is not a big drawback vs. Legolas, except in the rare instance of one shot (and conditional) instant kill treacheries such as Festering Wounds (Journey to Rhosgaobel), or The Master's Malice (Heir's of Numenor).

Attack: Here is where Yazan shines as either an ally or a Hero. Yazan and Legolas both attack at baseline 3 . However Yazan can also be easily buffed up to +3 without attachments using Kahliel’s Tribesman. In addition Legolas special ability is restricted as it only triggers if the enemy is killed in the attack. Yazan's special ability triggers on each attack (once per phase), and as noted at the top - can be very strong.

Finally, Let's look at the most extremely powerful one phase combat scenario for Yazan (either Hero or Ally), no attachments but with thematic Kahliel and 3 Kahliel’s Tribesman allies on table, and a spare Yazan (or other Harad ally) card in hand: Exhaust the Tribesman for the buffs. Defend with 4 . Ready using Kahliel discarding the useless spare Yazan in hand. Attack with 6 . Direct point of damage to another enemy: equivalent to up to a single 7 strike.

And you can repeat this every combat round as long as you have a Harad Ally card in hand....Once set up, Yazan can be borderline insanely overpowered, and we haven't even added any attachments to him!

The ability to put 1 damage on most enemies, anywhere on the board is incredibly versatile.

Either in Ally or MoTK Hero form, Yazan is a powerful and unique card that adds many options to how you engage enemies on the table.

RiddermarkLord 94
I disagree with your review. While one direct damage is helpful, it is basically just puts him at 4 attack. If an enemy has one health remaining, Gondorian Spearman is far better. Also, have you every actually used Yazan to kill a barely alive, heavily shielded enemy. I find those chances to be unlikely. Paying 5 for a maybe is not great. I would rather just play Marksman of Lorien to kill the enemy. The only real use a see for Yazan is for Vilya shenanigans or big ally decks. Regardless, there are better options as attack is the least useful stat. Also, your best case scenario is so unrealistic. You could have just used Legolas with a Rohan Warhorse and a couple bows, for far cheaper. Why not just let your Tribesmen attack, or buy actually good allies? Finally, using him as a hero is fine, but Bard deals more damage and Legolas places progress. — NERD 522 11/6/22
@nerd I agree. he's an ok ally, and the five can be reduced if you're running hirgon in a heavy tactics deck, but to be honest, there are just better attacking options in tactics out there. And while he does have the ranger trait, harad trait does not give him access to that many weapons, whearas legolas can wield bow of the galadhrim, rivindeel bow, Rivendell blade, etc. Legolas is still the top gun archer, and I would say motk is the best version of him — BlackArrow 250 11/7/22