Response: At the beginning of the quest phase, search the top 5 cards of the encounter deck for an enemy and put it into play engaged with you. Then, reveal one less encounter card this phase (to a minimum of 0). Shuffle the encounter deck.

"We must press our Enemy, and no longer wait upon him for the move."
Aragorn, The Return of the King
John Pacer 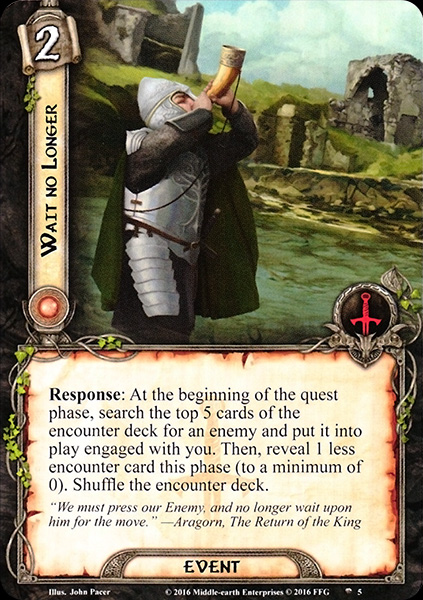 What if I told you this card could be one of the best tactict cards? I love also hammer-foe, feint, gondorian shield but this one give to tactic a unexpected aspect. Tactic heroes Hama and Mablung gets a real boost thanks to it. It gave a good alternative to the classic Boromir shell.

For me wait no longer is so strong because it gave opportunities to control the encounter deck. When you reveal only one (or zero) card each turn you can plan everything way more easily. Energy can manage the encounter deck with a test of will and this card is the second best choice to ensure that all is going to be okay.

Rouxxor 1543
What if this cards whiffs and you don't get an enemy. do you still reveal 1 less card? — BlackArrow 250 7/26/22
My guess is that the word &quot;then&quot; implies that you must put an enemy into play in order for the second part of the card to trigger. However, my question is: why is this a &quot;response&quot; and not a &quot;quest action&quot;? — warlock000 1692 7/26/22
its a response, because you can only do it at the start of the phase. if else, you could combine it better with e.g. gildors council and its more easier to get no staging in a round. — doomguard 1419 7/27/22
3

One of my favorite cards for a dunedain deck. 1 less card revealed in exchange for an enemy is a steal, and the two resources isn't too bad. you can pull out a weak enemy, bypass any "when revealed" effects, and have to worry less about revealing other bad cards during the quest phase. dunedain can sometimes struggle with questing, so this helds greatly, and is also fantastic multiplayer. only problem is if it whiffs and you wasted two resources OR you pull out a hill troll type enemy and you're like "ohhh crap!" (both have happened to me before ;)

BlackArrow 250
together with #hiden way its silver-bulletty in multiplayer carn dum, or other hard multiplayerquests, solo its (too) expensive — doomguard 1419 11/7/22
While I have never played with the card, I would think it would be better in solo, as then you won't reveal any cards, allowing you to quest precisely. In addition, it is one of the few cards that allow Dunedain to remotely function in single player. — NERD 522 11/7/22
2 res solo is 2/3 of your res. by default you have only 1 left you cannot do much with only 1 res. with 2 player its only 1/3 of the res of that round and with more player the better. if i do not play with tactic-mablung and/or amarthuriel i would not use this card in solo its to expensive. — doomguard 1419 11/7/22
But in multiplayer, there are also three times more cards revealed. Every turn, each player needs to be able to deal with a card. If you are running a deck that can handle an enemy, paying two to guarantee one is great in solo. Especially because you don't have to quest against it. — LEGOlas 100 11/7/22
i have given you my experience, you are free to ignore it. have never used it in solo, have sevveral times used it in multiplayer and helped a lot, specially if much sorcery or similar is there. with 1 res i am not able to get a decent boardstate up, if you can, respect. tell me if you won a hard quest with a fundamental role of this card solo. i have only seen that in multiplayer. — doomguard 1419 11/7/22
That makes sense, I prefer playing fun decks (like thematic solo Dunedain) over powerhouse ones or playing multiplayer, so that is how I evaluate cards. I can see how this card is not the best in solo. However, I don't understand how it is better in multiplayer. If you play this in solo, you don't need to save a resource for Test of Will or worry about a high threat card. In multiplayer, you still have to guess what will come from the encounter deck. — NERD 522 11/7/22
in my experience: the touhg quests in multiplaer are not those that have regulary 1 or 2 more encounterars, i that are &quot;normal&quot; encountercards, it becomes oerproportional, i to much common (surge) or new keywords appear, like sorcery or boarding,.... where a good multiplayerfellowship can handle 1 (or 2?) of that kind in a round, but 3 often shifts the game to loose. and it is worse than a test of will, it cost more and et you an enemmy or ery unlucky get you nothing. if you coulduse it like test o will after reveal, than i would call it a ood tactic-test o will, but so you perhaps get a worse card than you would et in normal staging. another point in solo you normally do not need less locations. in multiplayer locationlock is a possible thread, and this card help to get fewer locations. — doomguard 1419 11/7/22