Play only if the characters you control have a total of at least 9 different Traits between them.

"For the rest, they shall represent the other Free Peoples of the World: Elves, Dwarves and Men." -Elrond, The Fellowship of the Ring
Uriah Voth

Beneath the Sands #64. Neutral. 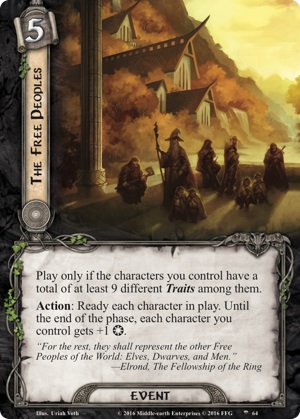 First, I'll compare this card to Grim Resolve. It costs the same, but this one is neutral and not Leadership, so it's easier to play in any multi-color deck. It has the same effect, plus a significant questing boost: at least +3 (heroes), and potentially much more. The willpower effect doesn't share in a multiplayer game, but the readying does. All in all, this is a very good card, if you don't mind spending the 5 for it, or have some way to make it cheaper (Vilya?) So this should be an easy pick: if you liked Grim Resolve, you'll love Free Peoples!

Now that that's resolved, I'll spend the rest of the review answering one important question: how hard is it to have 9 traits? The answer: it's surprisingly easy to control heroes and allies with 9 different traits. I'll start with the bad news: it's literally impossible to choose 3 non-Saga heroes with 9 different traits among them. So, you won't have 9 on your first turn, but it's laughably easy to have 6, and not hard at all to have 7. It's even possible to have 8 if you work at it.

Allow me to demonstrate.

Every hero has the possibility of the following three traits:

Go ahead, check them. Every hero has only those three, and no more? Well... not exactly. As of this writing, when we have received (spoiled or published) nearly all heroes from the entire Saga series and up through the Haradrim cycle,
Here is every single exception to the rules above:

So here's the bottom line. If you want 7 traits on your heroes, you have thousands of options: choose any three fealties, with one of each profession, and make sure at least one of them is Noble. 7 Scouts times 15 Rangers times at least 25 warriors, minus a few hundred combinations with duplicate fealties, is at least a few thousand. But,

And you can't get 9. Not with just your starting heroes.

But it's not hard to get to 9! Here are just a few of my favorite ways.

... plus of course, dozens of other ways to add one trait at a time. Get yourself a Craftsman, like Master of the Forge or a handful of others. Or, grab an ally from any of the many fealties that don't match your heroes. If you picked your heroes right, it'll only take one or two allies to get you set up, and you could easily have a deck full of possible choices, to make sure you draw at least one early.

So in conclusion, playing Free Peoples is probably easier than you think. Give it a try!

ohuerc 417
With Bond of Friendship you can even start the game with 9 Traits. Also you get one more ressource each turn, wich makes it easier to play The Free People (and you have more characters to ready and boost willpower). — Emmental 307 10/19/20