Action: Look at the top 5 cards of the encounter deck. Put them back in the same order.

...Legolas was standing, gazing northwards into the darkness, thoughtful and silent as a young tree in a windless night.
-The Two Towers
Vilius Petrauskas

Challenge of the Wainriders #58. Lore. 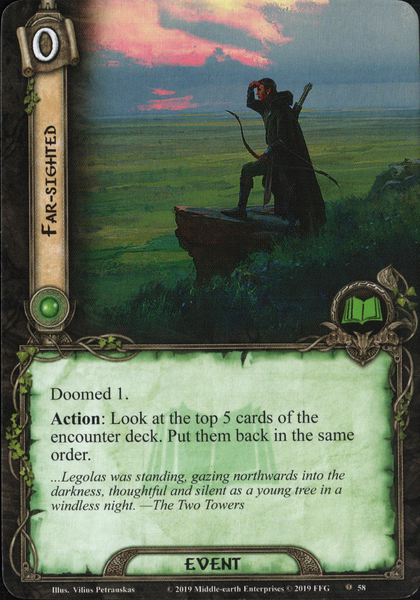 An interesting card. It's free to play, and Doomed 1 isn't usually a big deal. No question, it'd be very nice to know the next 5 encounter cards. Other cards that can work with it are Palantir, etc. However, it's only a one-time use when played, and the true cost (as with many 0 cost cards) is, is it worth the deck space?

As much as I love the idea, thematic tie-in, and the great artwork, usually not, as knowing only the next card is often all you need in solo, which can be done repeatedly with ally staples like Henamarth Riversong or Firyal... both of whom can now become heroes thanks to Messenger of the King. Still, I prefer to play two-handed, so they can't completely scry for me.

However, I recently tried a quest, two-handed, where almost 1/3 of the encounter deck had surges, so I thought to combo Far-sighted with the little used Minas Tirith Lampwright... and I'm glad to say it worked well and felt incredibly satisfying, as Far-sighted let me see cards coming in staging, guaranteed Minas Tirith Lampwright to completely cancel cards (at times with their own surge), and I'd either know the upcoming shadow cards, or poised to at least know the encounter cards next round. (If really lucky, they'd include another surge I can cancel.)

Though to make it happen took 6 cards in my deck, which isn't worth it in regular play, but felt good for that scenario. Thankfully, this game doesn't require that I optimize every deck to the max, making Far-sighted a card that can be used for some fun effects, which at times may be more significant than expected, either on its own or when combined with other cards.

Another good use of this card might be in conjunction with Guarded attachments, so that you can attach them to the best possible cards for you (a location you can clear somewhat easily, an enemy you might kill with Hands Upon the Bow or Éomer and so forth) and possibly discarding some bad treacheries in the meantime, of course at the cost of the foreknowledge of the encounter deck this cards grant.

One other great usage for this card is in any scenario that requires you to pass a type of "test" in order to advance or avoid deleterious effects (of course, it is only useful to the extent that you know when the test is coming). Want to know how many characters to send to the sailing test? Far-sighted will (hopefully) show you a path to the requisite number of wheel symbols. Know that a hide test awaits you as you move from stage 1 to stage 2 in A Shadow of the Past? Far-sighted will tell you how much to hold in reserve. Need to pass that final racing test to cross the finish line ahead of those pesky Wainriders? Far-sighted might at least show you that it can't be done ;). Are you wondering where that band of Uruk-Hai are taking the hobbits? Well...you get the picture :).

Finally, since Doomed 1 is relatively mild, this is not a bad card to splash into a Saruman deck for some extra readying or into any deck that uses Keys of Orthanc for repeatable resource acceleration.

ironwill212 163
compared to other cards that let you scry the encounter deck, this one is way more effective, and only costs a single threat raise — BlackArrow 108 7/8/22