Response: After Éomer commits to the quest, spend 1 resource from his resource pool to immediately declare him as an attacker (and resolve his attack) against an enemy in the staging area.

...he was young, and he was king; the lord of a fell people. The Return of the King
Ryan Valle

The Mountain of Fire #3. Leadership. 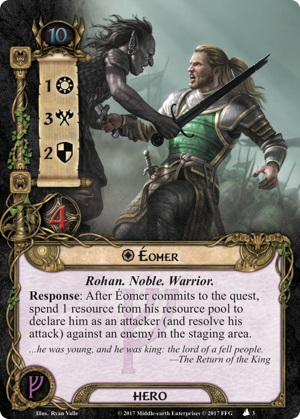 Éomer's ability could well be the ultimate form of action advantage - without using any other cards to make this happen, he quests, he attacks, and, assuming he takes his target out, he frees up another character from having to defend against the now-destroyed enemy's attack. Destroying an enemy also removes its threat from the staging area, which means Éomer contributes more than his willpower to the questing. And it's just cool to get the first strike in. And he does this at the fairly reasonable cost of one resource per use. But you need time to set that up, and you need to be playing the right deck and/or the right scenario. If you just put him in any old deck, he won't have any targets to use his ability on, because any enemies you revealed last turn have already engaged you, and if you play him in the wrong scenario he won't be able to kill his targets. My limited experience shows that Éomer is good out of the gate in most Khazad-dum/Dwarrowdelf scenarios, since they often have goblins that pop up from shadow effects and don't get to engage you before Éomer has a shot at them - and they're frail enough for him to take them out by himself.

But if you're playing against something other than goblins, Eomer will need some help. That help will generally not be coming from , so I'd advise against playing him in a mono- deck. Here are the main things to consider:

1) You need to ensure there are targets for him. I can see three ways of doing that:

2) You need to ensure Éomer can actually kill something, or else his attacks are meaningless. The most obvious and effective attack boost is probably Spear of the Mark, and it's what I've been using, but once I get that pack I will also be trying Firefoot; that's more expensive and the response won't be useful if Éomer mops everything up in staging, but sometimes an enemy will still slip through and be there in your face (unless you'e using Fastred, I guess). The other way, if you don't want to include in your deck, would be to make Éomer an Elf-friend, and give him Light of Valinor and a Mirkwood Long-knife or two; it's another thing I'm theorycrafting on because I don't have Sands of Harad, but it would make more use of Éomer as a quester (his normal 1 is a bit sad otherwise) and let you get double use of the attack boost.

TheNameWasTaken 7
Guthwine is another good card for Eomer and also Herugrim if you add some Necklafe of Girion for him (boosting Willpower and giving him the resource to do that each turn. Unseen Strike could also be useful and Firefoot too. — Alonewolf87 1620 5/24/20
I haven't really looked at the guarded cards yet (I'm way behind on expansions), but Necklace of Girion plus Herugrim does sound really good. — TheNameWasTaken 7 5/24/20
orcrist is in sphere if you want t0 go for guarded attachments (and it would help him get more resources to fuel his ability) — BlackArrow 250 7/8/22