At the end of the round, discard Galadriel from play.

Response: After you play Galadriel from your hand, search the top 5 cards of your deck for an attachment of cost 3 or less and put it into play. Put the remaining cards back in any order. 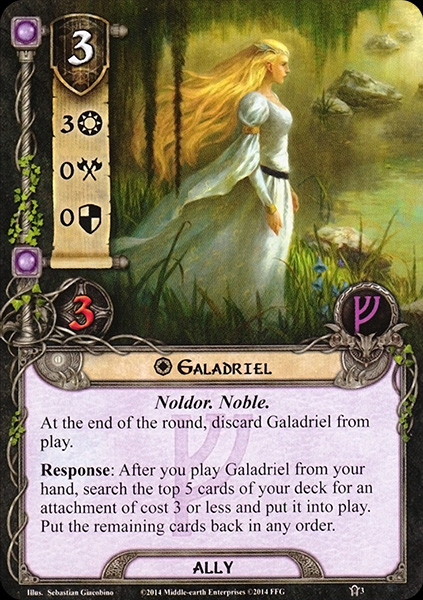 As I said in my review of Galadriel, everything is better with Galadriel. Given that, ally Galadriel obviously had a lot to live up to (admittedly The Road Darkens was released before Celebrimbor's Secret, but hero Galadriel had already been spoiled in advance, so everyone knew she was coming). That being said, ally Galadriel is also incredibly useful. She's not for every deck. Her ability specifically relates to attachments, so in general she is for decks which rely on significant attachments. But a lot of decks do that. She costs 3 resources, but that in the sphere which has access to good resource generation. And in return she accelerates those resources even further by giving you a free attachment (plus card draw since she digs it out of the deck for you).

Now, it's important to note that unlike her fellow temporary allies Gandalf and Elrond, Galadriel's Response only triggers when you play her from hand, not when she enters play. This is a definite downside, but given how powerful an effect resource generation/cost reduction is, it'd be ludicrous if you could get the effect by sneak attacking her. So let's talk about that ability. You search the top 5 cards of your deck for an attachment of cost 3 or less and put it into play. In the vast majority of decks that's going to be any attachment at all. The only attachments which cost more than 3 are Citadel Plate, Path of Need, Resourceful, the four Record attachments and Sword-thain. Any other attachment in the game is fair game. For example, Steward of Gondor; Sword that was Broken; Unexpected Courage; I could think of more but I feel like my point is already amply made just by listing those 3.

So, in exchange for your 3 resources you get 3 for one round (or a chump-blocker if you're really desperate for one I suppose), assuming your deck is stacked suitably, you get an attachment potentially worth the 3 resources you just paid, which as I said is effectively card draw as well, and then as the cherry on top you also get to rearrange the other 4 cards instead of shuffling. Not always the most useful ability, but Imladris Stargazer has been considered a pretty good ally since her release, and the fact that here that ability is just an added bonus really emphasises how good the rest of the ability is. If you think of it as the resources paying for the attachment normally, then you're paying the rest of the resources (which in the right deck will actually often be 0-1 resources) for getting the attachment out of your top 5 cards (targeted draw a la Heed the Dream), a one time Stargazer use, and a temporary 3 (there are some 1-cost events which give you +2 , this is obviously better though those events are more flexible). That's an incredibly good deal.

In the end, obviously the ally version of Galadriel doesn't match up to the hero, because the hero is amazing. But even as amazing as she is, she's not going to be in play all the time, and so long as you have a decent number of attachments in your deck, especially powerful 2-3 cost ones, you can do some amazing things. Galadriel makes a truly fantastic ally.

Warden of Arnor 5211
I especially like ally Galadriel in a quest with archery, like Helm's Deep. She can soak three points of archery damage before returning to Lothlorien. — Relmbob 59 11/5/16
fantastic quester for leadership combined with a free attachment AND then re-ordering the other 4 cards: what's not to like? — BlackArrow 265 6/25/22