Master of the Forge

Action: Exhaust Master of the Forge to search the top 5 cards of your deck for any 1 attachment and add it to your hand. Shuffle the other cards back into your deck. 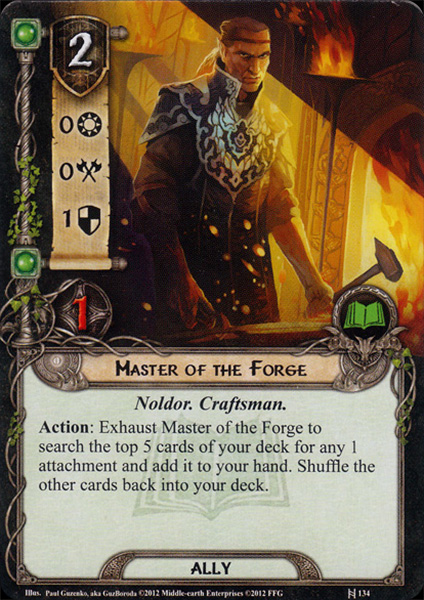 I personally think Master of the Forge is one of the best allies in the game. He's not for every deck, but he can fit into a huge number of decks, and if the deck has a decent number of attachments, he's amazing. Nothing flashy, just finding you the cards you need, one per round. I've talked elsewhere about the great power of glue heroes (often providing card draw or resource generation), and the Master of the Forge is kind of a glue ally in the same vein.

OK, so his stats are basically meaningless. You use his ability or you use him as a chump blocker - the one potential exception being that since he is a Noldor, if you're playing a dedicated Noldor deck (which would certainly benefit from the extra effective draw the Master provides), he would benefit from Lords of the Eldar. So in such a context the Master could actually continue being useful to you even once there are no attachments left in your deck. That's a niche case though, mostly we're only considering his ability.

But it's an amazing ability. He exhausts to let you search the top 5 cards of your deck for an attachment and add it to your hand - assuming there is an attachment in your top 5 cards, that's essentially drawing an extra card every round, except it can be a card of your choice. And if you don't see anything you want, or any attachments at all, it's fine because you shuffle your deck afterwards so next time you'll see a totally different selection of cards. In an attachment-focused deck, that's absolutely incredible, giving you a chance every round to find the attachment(s) your deck relies on to function (e.g. Vilya, Wizard Pipe, Steward of Gondor, Citadel Plate, Blood of Númenor, Gondorian Fire, etc). In a deck that's not specifically focused on attachments, you may well still have some very useful attachments you want to find quickly, and taking the attachments out of your deck with the Master of the Forge means you're more likely to draw something else with your natural draws - whether you're attachment-focused or not one of the handy side benefits of the Master is just the ability to dig out your duplicate uniques so you're hopefully not drawing them as your normal draws in the resource phase.

When talking about the Mirror of Galadriel I made various comparisons to other effects which let you search for a card you want - the same comparisons apply here, as some other effects may search more cards and/or lack the restriction of only searchign for a specific card, but the Mirror is the only other case of a search effect like this that's repeatable every round, and the Mirror carries with it the disadvantage of the random discard afterwards. To make another comparison, the Master of the Forge if you consistently find attachments in your top 5 cards is essentially a Gléowine who only works on you - but again, with the distinction that you can sometimes choose the card you want from multiple options and that in some decks the cards you're drawing are guaranteed to be the most important things that your strategy is specifically built around.

The one big proviso here is the thing I've been passing over - what are the chances of finding an attachment in the top 5 cards of your deck? Well, obviously that depends on how many attachments are in your deck in the first place. Assuming a standard 50 card deck, it's simple enough to judge that if you have at least 10 attachments then that's a fifth of your deck and you should have OK chances of finding an attachment in a random selection of five cards from the deck. I'm not going to go in-depth on the probabilities because I haven't done statistics for years, but suffice to say obviously the chances go up nicely as you add more attachments. Of course as you take out attachments the chance for future uses goes down, but then you've already found some attachments, hopefully ones you wanted (if they weren't the ones you particularly wanted, once again you stand to benefit from your deck being shuffled after using the Master). If your deck depends on one or more specific attachments to function then you may not even care if the chance is low, because any increase to your chance of finding those important cards is worth it. In the case of looking for a specific attachment, the chances of a 3x card being in the top 5 of your deck (for the moment we're ignoring the opening hand and any other draw) is 28% - not great, but then you reshuffle and try again and it's just under 50%, then over 60, and so on. Then we can factor in the fact of your opening hand and that you're drawing naturally every round. Assuming a Master of the Forge is in your opening hand and you can afford him round 1, you get to check 11 more cards minimum for your important attachment (opening hand minus the Master, first draw and the 5 cards you look at with the Master), more if you have other card draw effects. That's over a 50% chance of seeing your crucial attachment and once again the chances go up as you retry the Master every round while thinning out the deck with him and other draw effects.

The Master of the Forge can be used to greatly boost the chances of seeing important attachments as soon as possible in a game, or in some cases he can just be used to let you run less copies of attachments you want but don't need right away or in multiples while still being confident you'll find them by the time you do need them. In either case, he's an incredibly useful ally who can win games for you which you might otherwise lose to bad draws.

Warden of Arnor 5010
You touched on the shuffle piece a bit, but I think it deserves more discussion. Paired with cards like Imladris Stargazer or Gildor, Master of the Forge lets you draw the best card, then shuffle the rest away to look at new cards next turn and continue to pick out the most relevant draws. For those who are familiar with Magic: the Gathering, this has a striking resemblance to the Brainstorm-Fetchland synergy, except you get it every turn. — Box of Hats 609 8/11/17
The awesome combo between Master of the Forge and Imladris Stargazer was already discussed. Another component can be further added to take it to another level. Nori -&gt; Master of the Forge -&gt; Imladris Stargazer combines recursion, card draw and card prioritization. The best part is they all work independently well so also provide value individually before maximum synergy is achieved. — Nystrum 23 5/18/22