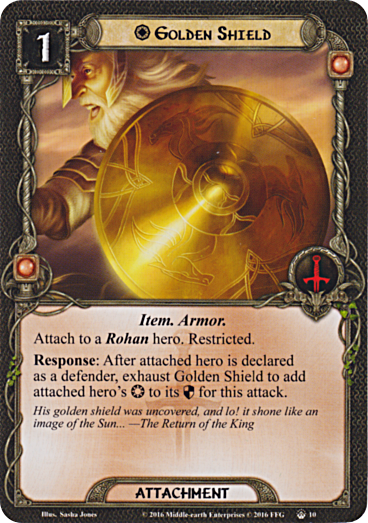 I like this card but I don't love it. Here's why. Firstly, I like it because it is cheap and no other card (except perhaps Blood of Númenor) can provide such a significant boost to your hero's . I so like it because it doesn't state 'printed ' so the bonus can be significant if you find ways to boost your hero's , for which there are plenty of options: Celebrían's Stone, Dúnedain Quest, The Favor of the Lady, Silver Circlet, Fireside Song, Song of Hope, the list goes on. The only problem here is that none of these boosting cards are in sphere with Golden Shield. Sure, you can boost your by 1 with Théoden but that's about it for boosts and when is not the strongest stat for a hero, your choices are few to say the least without having to make at least a dual-sphere deck or at least have some way of playing off-sphere attachments (if you are looking to boost your hero's to epic proportions. I generally play solo, so this isn't such a problem for me as I will generally be running a tri-sphere deck anyway, but it could be a problem for some people. It is limited to Rohan heroes, so it seems this has been designed with either Théoden or Éowyn in mind, but with Nor am I a Stranger, any hero could make use of Golden Shield with a bit of planning. With this in mind, Elrond is a great target as he can quest for 3 (potentially without exhausting with Light of Valinor) and defend for 3 until you are able to play Golden Shield after which he's defending for 6 and can be given a burning brand for shadow cancellation. This brings me nicely to my biggest beef with this card. You have to exhaust it to give the defender a boost for 1 attack, which not only means that, if you have multiple enemies attacking you, you're screwed; but also that you cannot make use of Sterner than Steel, which is the only shadow cancellation available within the sphere. You therefore need to pair it with another weapon/armour attachment, however it's natural pairing would be with Herugrim if you wanted to make use of a hero's high , which coincidentally also requires an exhaust so using that to negate a shadow effect would mean you then cannot attack back with it. I look forward to seeing a card that enables you to ready an attachment, then both Golden Shield and Herugrim would be promoted to that epic status they deserve.

Aurion 776
I agree that this is a card I want to love more than I do. That said, it works really well with ALeP's Thengel. Also, the ALeP card Need Brooks No Delay is a huge help for tactics to play those off-sphere attachments. As a side note, the ability to ready an attachment would break the game unless it were severely restricted, i.e. once per game, or an event that goes to victory display. — kjeld 387 11/5/21
I was thinking along the lines of a Rohan ally, discard to ready a weapon/armor attachment — Aurion 776 11/5/21
4

Truck 1225
Eowyn is never safe behind this shield. A warg ripped her face off when its shadow effect ignored her defense :( — Ring Maker 83 11/3/21