Attach to a Dúnedain or Gondor hero. Restricted.

Response: After attached hero participates in an attack that destroys an enemy with 5 or more printed hit points, exhaust Sword of Númenor to add 1 resource to attached hero's resource pool.

...the flowing characters of Númenor glinted like fire upon the blade.
The Fellowship of the Ring
Romana Kendelic 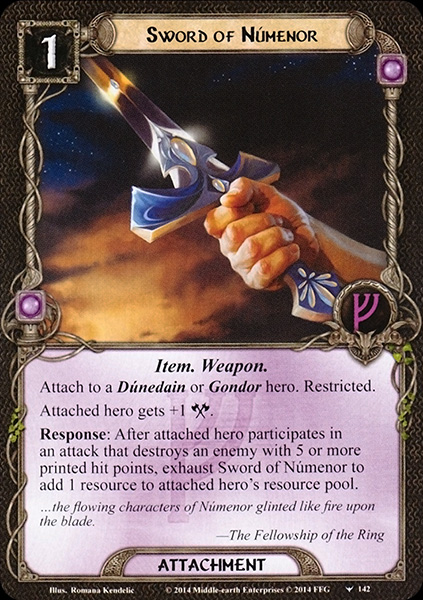 Sword of Númenor is one of my favorite cards from the Angmar Awakened cycle, and can be a very powerful card in the right deck. It bears a striking resemblance to Dúnedain Mark: Both cards cost 1 resource and impart a +1 bonus. Since its release, the merits of both cards have been debated; however, rather than pit these two cards against each other in some ultimate struggle for dominance, it is instructive to understand where both cards shine, because they do cater to different deck archetypes.

Points in favor of Dúnedain Mark:

Points in favor of Sword of Númenor:

What this analysis reveals is that, while both cards are similar, some situations will favor one over the other:

With all that said, go have fun with it! If there is anything I've missed, please add it to the comments below. Sword of Númenor is a great card; it just requires some planning to get the maximum benefit from it.

Before I go, I will leave you with one final vision: Mablung, dual-wielding Sword of Númenor, with Gondorian Fire attached. It is a thing of beauty.

WanderingTook 1297
What do you think of it now we have Orcrist, which gives an additional attack and has less restrictions? — ShortcutsMakeDelays 168 4/9/19