Horn of the Mark

Attach to a Rohan hero or Merry. Restricted.

Response: When a character leaves play, if that character shares at least one trait with the attached hero, exhaust Horn of the Mark to draw 1 card.

Then Éowyn gave to Merry an ancient horn, small but cunningly wrought all of fair silver with a baldric of green...
-The Return of the King
Unknown 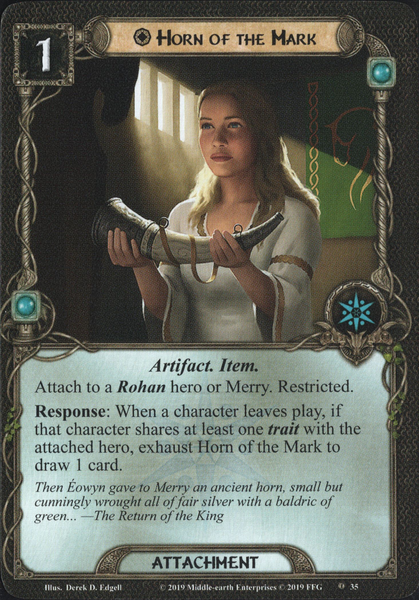 "That is no orc horn..." Nope. It's tons of cards entering your hand every game.

This is the card draw Rohan has been thirsting for. Until Horn of the Mark was released there were limited options for ensuring those allies and tools would see your hand in time. Horn of the Mark is THE card which almost single-handedly rounds out the Rohan archetype as the final packs of the game are released. It seemed odd to me that Horn of Gondor previously had one of the best synergies for "ally leaving play" attachments in Rohan decks. HotM replaces this without question, especially with Théoden helping reduce ally costs already.

While Spirit/Rohan card draw may be a blessing in itself, Horn of the Mark can pair with hobbit decks to some extent so long as Merry joins the party. Who knows, perhaps Nor am I a Stranger may even make it's way to more decks. With the primary action ability of Rohan discarding or leaving play the payoff is huge, and even more so when Gamling is there to save them. Even the cards which temporarily put Rohirrim onto the battle field such as Lothíriel and Horns! Horns! Horns! will get more cards into your hands for no extra cost.

Horn of the Mark has quickly become a Rohan staple. If you love building Rohan it is a must.

Uruk-guy 506
This card is definitely awesome and an amazing addition to the Rohan decks, even though Lothiriel could be its best interaction. I am not sure about the part you mention regarding Muster of Rohan. Since you must exhaust the Horn to draw a card even if 4 allies are leaving play you will still draw only 1 card. — Alonewolf87 1655 7/7/20
Woops! That moment you realized you overlooked a huge aspect of the card! Thanks for pointing that out. — Uruk-guy 506 7/7/20
Why can't ally Merry use it? Should be &quot;attached character&quot; — kainveus 118 10/28/21
I would say by the text that ally merry i a valid target. — xobeabacat 16 10/28/21
Should work the same way as Arod on ally Legolas. — kjeld 463 10/28/21
I’m experimenting a bit with Merry + Horn + Elf Friend in a Silvan deck. — Nystrum 29 2/11/22